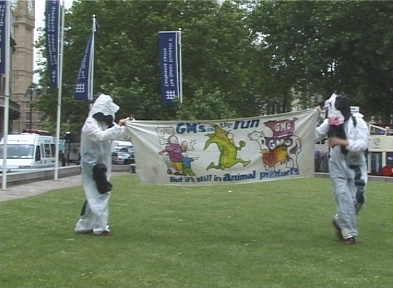 The protesters are part of a coalition of consumers and farmers angry at Sainsburys failure to fullfil their previous promises relating to the sale of animal products from animals fed with genetically modified animal feed.

On the 1st July, a nationally co-ordinated series of direct action resulted in the blockading of five of Sainsburys largest chilled food distribution centres and cost the company hundreds of thousands of pounds during each hour of the blockade.

Anti-GM campaigners say that GM animal feed is entering the human food chain against the wishes of the consumers and that the market for GM animal fed is supplying the biotech industry with a financial lifeline that should be snatched away.