The destruction of civil life in Gaza

Recently, a member of Shefield Palestine Support Group went to Gaza to visit his family and to visit the children's projects supported by the group. Musheir witnessed, and himself suffered, daily humiliations. This is the full report. For other reports please visit the Sheffield PSC website: 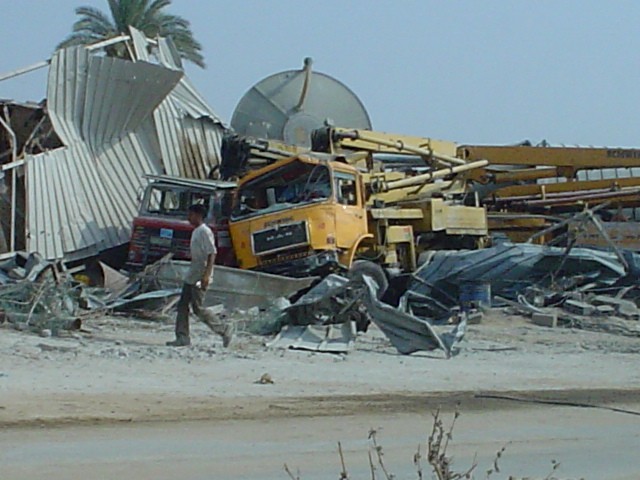 A snapshot of the devastation in the Gaza strip

The coach, filled with twice its capacity, has been standing in front of the Israeli Gate at Rafah Border Crossing for over three hours. Young toddlers and babies have been crying non stop for most of the three hours; their families had no way of stopping them. Signs of severe tiredness appeared on old people. Patients with different medical conditions were stuck with us in the coach, one of them with heart disease started to show serious signs of discomfort. All what we could do with the rest of the passengers is to get him out to set at the side of the coach. The strong heat inside the coach made the passengers loose their temper easily; arguments brake out over little silly things. Suddenly, one of the passengers shouts, the Israeli gate started opening; the driver rushes to his seat; the coach starts moving. As simple as this, Three hours and fifteen minutes under the June heat with all these passengers and hundreds more who were still waiting on the Egyptian side for no reason but the planned Israeli policy of humiliation of the Palestinian people. We arrived to the Israeli side, my apologies the Israeli occupied southern part of PAlestine. After additional long hours of humiliation, we reached the Palestinian side of Rafah.

You can feel the devastation that the Israeli army has left wherever you go in the Gaza Strip. We pass Rafah, a town which recovers from one wave of Israeli collective house demolition and killing of civilians only to prepare for the next. There is very little left of residential neighbourhoods like Block O, Yibna camp, Hai Issalam and Tall Issultan. Most of it has been transformed to wasteland at the hands of the British made, Israeli operated and American funded Caterpillar bulldozers.

On the night of my arrival, the news came from Abu Holy check point, in the middle of the main road which links the north and south of the Gaza Strip or as referred to by Palestinians the main symbol of humiliation. The resistance fighters have managed to blow up the biggest military post in the Gaza Strip, Orhan, by digging a 400m tunnel to reach beneath it. Severe Israeli collective punishment followed. The main road linking the north and south of the Gaza Strip for six days; even ambulances were denied access; my sister Maha, who was in Gaza city when the road was closed, could not get back to her family in Khan Younis for six days. The Israelis started to collectively destroy half a kilometre of the area south, east and west with every thing on it. 17 houses, two ten story buildings, the main ready concrete factory in the area, tens of acres of agricultural land, water wells chicken and animal farms were all destroyed. My relatives, four brothers, who are all unemployed and struggling to survive, lost their houses, furniture, personal belongings and even their wives jewellery under the rubble. They had no where to go but to live temporarily with relatives. The closure of the main road created a human problem for hundreds of passengers who arrived daily from Egypt. They could not reach their towns, behind the check point in the northern part of the Gaza Strip. They had no where to go but to stay in mosques close to the Abu Holy check point and with local people who were willing to offer them a place.

I spent eleven days in my home town Khan Younis, to experience the same scenario every night. The drones will come out first for 20 minutes after mid night, then the random shelling of residential areas start spreading terror in the camp and town. The Israeli collective punishment continued; 25 houses were demolished in the western part of Khan Younis camp; a 75 year old disabled man was killed under the rubble of his house.

My mother enters a state of panic following the news that the Israeli Apaches attacked two areas in Gaza in a failed attempt to assassinate members of the resistance movement, extra judicially. She phones my sister Mona who lives in Gaza to make sure that they are fine; a common thing that most of Palestinian families do on daily basis.

More than 70 Israeli tanks lay siege to the town of Beit Hanoun at the northern part of the Gaza Strip. Bulldozers move in to kill and injure many civilians, destroy tens of houses and acres of the most fruitful land. Beit Hanoun used to be called the fruit and vegetable basket of the Gaza Strip. The Israeli defence minister, Shaol Mufaz declares that the Israeli army will remain in Beit Hanoun until the intended withdrawal from the Gaza Strip at the end of 2005. The town is still under full Israeli occupation.

The construction of the Separation Wall in the West Bank continued during my shor stay destroying all aspects of Palestinian life around it. Parts of Nablus and Jenin were under siege, many civilians were killed in the process. All what the Gazans, like the rest of the Palestinian could do, is to protest in frustration while the Israeli army continues to commit war crimes all over the West Bank and Gaza Strip.

No body can stop them; they enjoy the American blind support, Tony Blair also is on their side. They do not care; no body is taking any action to stop them, International community, Arab Community or even Arab people; says one of my elderly neighbours.

Amid all this, life goes on for the Palestinians; one neighbourhood will be having the funeral of a martyr while another will be recovering from the latest Israeli invasion and collective house demolition and a third is celebrating a wedding. A phenomenon which can not be understood unless we consider nearly four years of Palestinian life through the second Intifada.

It was very rewarding to visit two of the children centres which Sheffield PSC support in Jabalia and Khan Younis refugee camps. I could not reach the third centre in Nussairat refugee camp because of the closure of the main road and not wanting to risk being stuck at the wrong end of the main check point had the Israeli occupation decided to close the road without a notice as they always do. It was great to see Palestinian children in these centres escaping the devastation surrounding them for a few hours. In Jabalia, we provided the centre with material needed to establish a child centre as well as stationary needed for the children summer camp. I met the ten members of the children Folk Dance group who will visit us in November this year. They were so exited to hear about York, Manchester, Sheffield, Liverpool and London where they will be performing. In Khan Younis, we provided LCD projector for the children library which will help children watch recreational and educational videos and DVD’s in large group. In Khan Younis town we started a new modest project whith a group of youth which we called the children moving library; it is simply two suit cases, as a start, full of books and toys which will visit children in different neighbourhoods. It is essential to continue to establish grass root links with Palestinian None Governmental Organisations in the West Bank and the Gaza Strip. It is the best way to express to the Palestinian people that they are not alone in their just struggle for freedom and justice.

On the way out of the Gaza Strip, an Israeli intelligence officer stopped me. In the interrogation room ha starts bombarding me with questions in a very hostile manner; where are you from? Khan Younis; I answered. How far from Abu Holy check point? Six kilometres. Do you know the area? Very well; I spent big parts of my childhood in it; long before you destroyed our house, water well, orange and olive groves in November 2000. Just answer the question; he shouted. Tell me what you know about the Palestinian military operation at Abu Holy check point. All what I know is what I heard in the news. You are lying; he screamed. You are an intelligence officer and you knew nothing about it; do you expect me to? He stopped the interrogation, threw my passport in my face and told me that I am prevented from leaving the Gaza Strip. He ordered his assistant to take me out to the corridor in front of the interrogation room. 90 minutes later, he called me for another session of interrogation; why are we destroying the area adjacent to Abu Holy check point? You always destroy areas collectively without a reason. No we do not do such things we are Jews!!!. I thought to my self, we always avoid linking your war crimes to Judaism but to Zionism, and you, very stupidly, do the opposite. We are destroying the area because people knew about the tunnel, which is completely untrue. Every one in Khan Younis will pay a heavy price. Once again he kicked me out of the interrogation room. Two intelligence officers took me to another area where I was strip searched in a very humiliating way and then once again taken for more interrogation. Six and a half hours passed and five rounds of interrogation until one junior intelligence officer told me that my passport will be given to me soon and that I am free to go to Egypt.

On the coach taking me to the Egyptian side, I thought to my self, this humiliation was necessary to remind me once again that I worth nothing as long as my people remain occupied. What I suffered was nothing compared to the great hardship that my people endure in every aspect of their daily life at the hand of the Israeli occupation?
I left home believing more than ever of the need to continue campaign to expose to the public the daily war crimes that are committed against my people, which are not always reported by the media. Israel must be exposed for what it is; a racist and expansionist state rather than the so called only democracy in the Middle East. Pressure must be increased on the British government, through lobbying and gathering public support, in order to stop its shameful pro Israeli stands. It is the least that we can do.