Aldermaston - A new campaign is launched to 'Block the Builders' 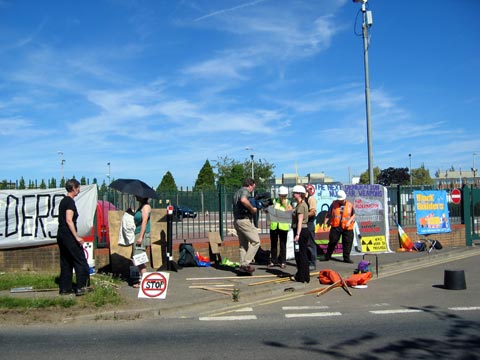 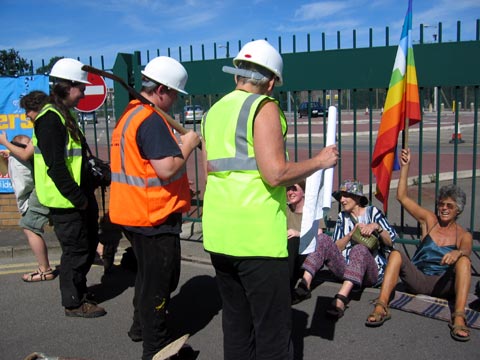 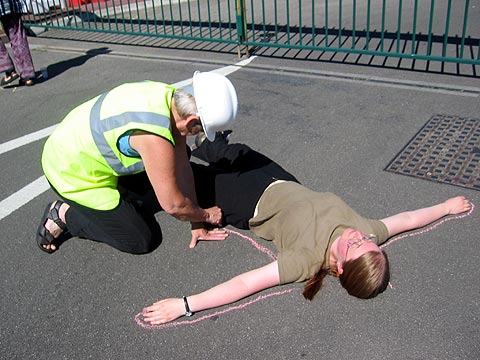 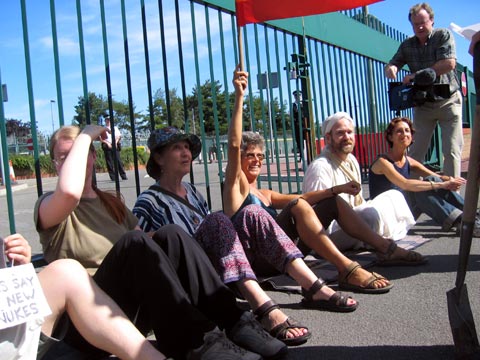 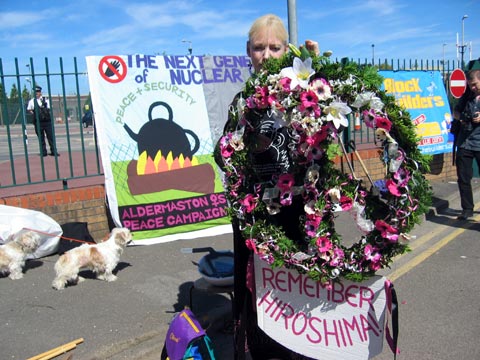 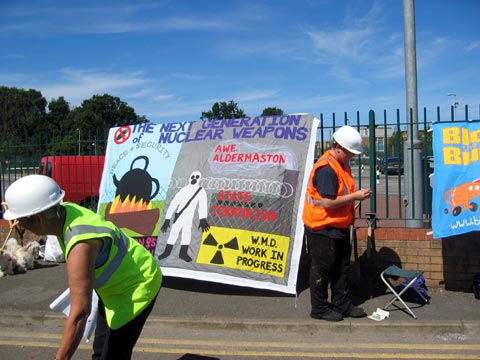 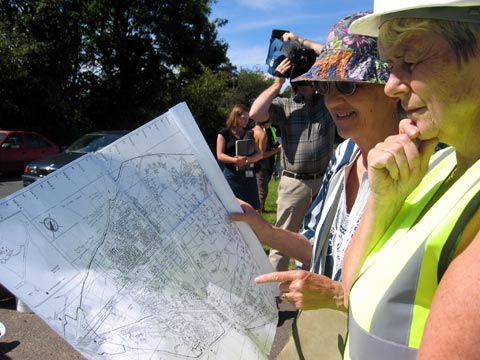 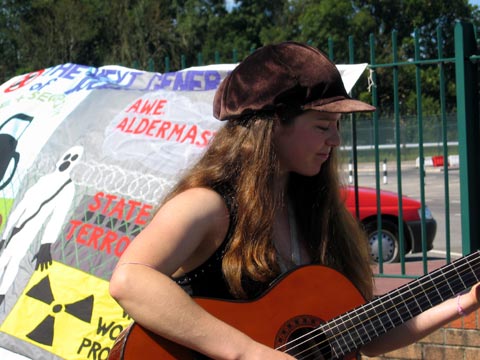 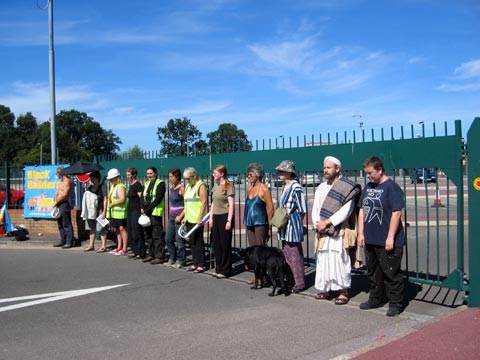 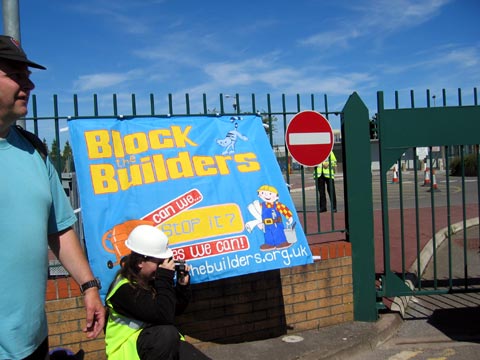 Yesterday, Saturday 7 August, saw the launch of a new campaign at Aldermaston to disrupt the building of a proposed new laser facility using non-violent means.
Around two dozen people, including several Oxford activists and your intrepid Indy reporter, gathered at the main gate of AWE Aldermaston and gave the gentlemen of the MOD a first taste of how we plan to ‘Block the Builders’.
The action included a minute’s silence in commemoration of Hiroshima, then some role play where half the protesters dressed up as builders and tried to enter the base while the others peacefully prevented them from doing so. Each side put their case in, on the whole, good tempered exchanges. It was noticeable that some builders had unusually large families to support! One protester got in under the gate and was removed with great care by the MOD, as TV cameras and activist camcorders rolled. Not everyone captured the scene first time, so the protester was allowed back onto the base and the whole scene was re-enacted for the benefit of the rest of the photographers. Later, we had a picnic in the woods and a meeting to discuss further action. It was decided to have the next protest at the end of October, to coincide with the Halloween weekend, and with the provisional title of (appropriately enough ‘Spook the Base’.


Here is more info and links from the organisations involved in the campaign:

http://www.blockthebuilders.org.uk/
Block the Builders is a new campaign which aims to nonviolently prevent the building of a new laser facility at AWE Aldermaston, the first stage of a series of proposed developments which would enable AWE Aldermaston to build the next generation of nuclear weapons. If and when construction starts on site, we plan to block the builders through a nonviolent blockade of the site. We don’t think this will happen until 2005, but we need to start planning now. The infopack gives you a basic idea about the campaign, and how you can pledge to join in.
Some background
On 23 June 2004, the Thatcham planning committee accepted the Ministry of Defence's proposal to build a state of the art laser facility (the Orion laser) at AWE Aldermaston. The facilities, which will enable the development of new nuclear weapons at Aldermaston, received less scrutiny by the planning committee than a supermarket. The next step in the legal process will be a formal building application by AWE Aldermaston, which is also unlikely to receive much scrutiny.

Many people, and local Councils, now demand a public inquiry into the proposed developments at Aldermaston, but the outcome of such an inquiry would not be legally binding. It seems the public has less opportunities to make its voice heard in the planning of a nuclear weapons factory, than if your neighbour wants to build a new garage.

http://www.blockthebuilders.org.uk/infopack.pdf
What do we know?
In June 2002, the Observer and Guardian reported on
plans for new developments at AWE. A spokesperson
for AWE told the Guardian that the new facilities would
provide Aldermaston with the capacity to design and
produce mini-nukes.
In August 2002, AWE published their Site Development
Strategy Plan (SDSP), outlining new facilities, including a
new supercomputer, a state of the art laser facility, hydrodynamic
testing facilities and materials-testing laboratories.
In January 2003, the government announced the extension
(to 25 years) of AWE ML’s existing 10 year contract
to manage Aldermaston, at a total cost of £5.3 billion,
and in May 2003, the recruitment of new scientists was
reported.
In October 2003, the Ministry of Defence (MoD) submitted
outline plans for the new Orion laser facility to West
Berkshire District council; it was approved in December;
but in February 2004, the MoD withdrew this planning
notice in the face of a threat of legal challenge;
April 2004: hundreds of people take part in the London
to Aldermaston march.
May 2004: the MoD resubmit the planning notice with
additional (but limited) environmental information;
June 2004: West Berkshire District Council local planning
commitee unanimously unoppose the planning
notice – the next stage is a full planning notice.


This is the link for the Aldermaston Women’s Peace Camp(aign):