Iraq: The Evil Of Cluster Bombs

Baghdad: A Father goes on hunger strike in support of his son, who has lost partial sight in one eye and fingers - due to a cluster bomblet. No one is to blame!! 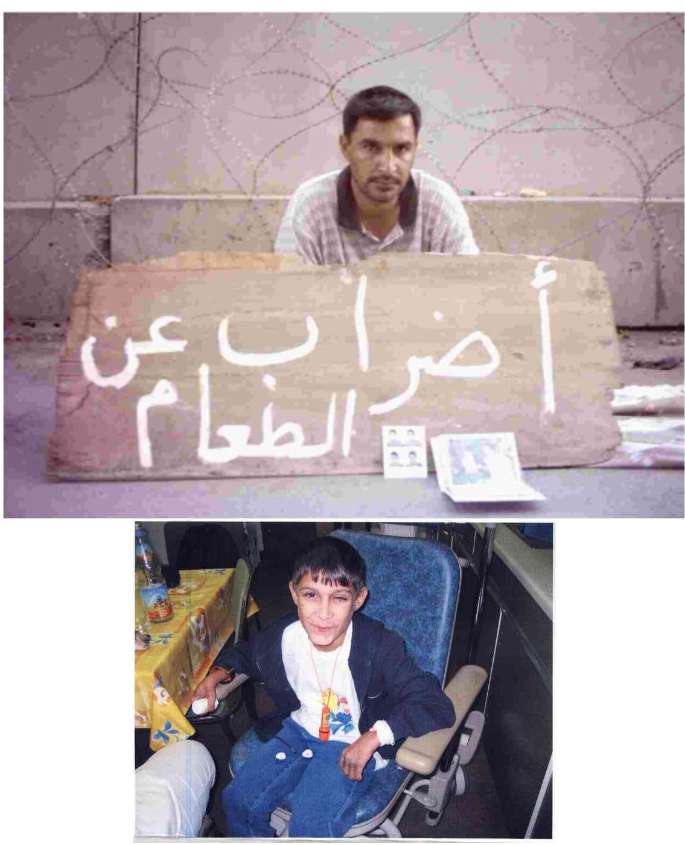 Hi
Bagdad 1 August 2004
Yesterday, while walking alongside the Palestine Hotel
with the Sheraton/Palestin Hotel complex, I found a man
holding a 'fasting vigil' or hunger strike. He had
painted 'fasting vigil' in Arabic in white paint on a
rough piece of wood and was sitting on the ground on a
piece of material clutching a small photo album. His
protest was directed at the Iraqi Government - he said:
"I want the Iraqi Government to pay my family the
equivalent of the value of the oil that leaves Iraq
during one second".
Shu'aib Abdul Jabar, 36 years old, had earlier been
holding his vigil right outside the Palestine Hotel, but
he had been moved from this spot right outside the hotel
by the police and the American soldiers. The soldiers
had told him "This is a place where people are staying,
it's not a place for making vigils - go somewhere else."
So here he was, a liitle further from the hotel, but
still within the complex.
He had started his fast today and intends only to drink
water until the Iraqi Government answers him.
So why was he holding this vigil?
Shu'aib lives in Sha'ab, a suberb of Bagdad, with his
wife and four children. He hated Saddam Hussein, but did
not welcome the war or the invasion or the occupation.
He called the USA and the occupation the Arabic version
of 'scum' and he told me how badly he wants America to
leave his battered country.
He and his family had remained in Sha'ab throughout the
war and were, thankfully, fine - physically. The
children, however, were absolutely terrified by the
bombing raids.
200 metres from the family home was an Iraqi Army base,
itself surrounded by a residential area. The Americans
had heavily cluster bombed the area during the war,
because of the base, with little or no regard for the
homes around it. After the war, the Iraqi Authorities
and police, with the US army, cleared the site of
cluster bombs. This was because the US army wanted to
use the former Iraqi Army base for their own base. This
they did until August 2003 when they left. Then the
local children started playing there, collecting
anything useful they could find and taking things home.
Shu'aib's 9 year old son, Mustafa and his 7 year old
son, Ali, were at the base doing this on 8 August 2003.
Although the site had been cleared of unexploded cluster
bombs, one remained. Mustafa found it and picked it up.
As he held it, it exploded in his hands with a huge
blast. Poor little Mustafa lost 6 fingers on both hands
and the sight in his left eye. Ali, standing nearby, was
also injured, but, somehow, not seriously. Shu'aib and
his wife heard the explosion and rushed to the scene.
They found their son there in absolute agony and picked
him up, with Ali, and took the 2 boys straight to Adnan
Hospital. Mustafa needed 4 bottles of blood during the
operation - he had lost so much blood from the accident.
The treatment cost the family $2000. Before the war
Shu'ab had been a painter and so, luckily, had this
money saved up. He now has no work and no savings
whatsoever.
After the operation, Mustafa was taken to a hospital in
Hamm, Germany by a German NGo for further treatment and
rehabilitation. Mustafa spent 10 months in Germany and
his family missed him so much during this time, keeping
in touch with him by telephone. They realised that their
son was one of the 'lucky ones', chosen to go abroad and
receive excellent and the best treatment available.
Mustafa's mum became ill because of what had happened to
her beloved son and because she missed him and worried
about him so much - Mustafa was alone in Germany.
Shu'aib had not even been allowed to travel with his
son. He told me "If I had gone there I would never have
come back."
Mum is better now and Mustafa is physically well - the
stubbs of his fingers have healed well. But inside,
Mustafa is badly scarred. Before the accident, Mustafa
was going to school and doing well. He enjoyed learning
and he loved computer games. Now Mustafa cannot go to
school and cannot play computer games and he has become
angry and violent - he was a quiet, mild mannered child
before, like his brothers and sisters. They still go to
school as normal, while Mustafa just stays at home and
plays as best he can.
Shu'ab has received no compensation for his son's
injuries or for the money he paid from the family's
savings for Mustafa's operation. He made a complaint,
but one month after doing so, Sha'ab police station was
blown up in a suicide car bomb and all of the complaint
papers he had filled out were lost in the explosion and
fire.
I asked him what he thought of Iraq now. Shu'aib replied
"Insha'allah Iraq will get better after the election,
but there is no hope with this government now." He told
me "I worry about bombs all the time, there is no
security, no water and no electricity - we get 2 hours
of electricity and then 4 hours off - what can we do?"
He had come to the Palestine Hotel area to raise these
points. Journalists had been asking him about his vigil.
He just wants the people and the government to hear his
message. He said that the soldiers didn't care and the
government didn't care. He had a simple message written
in English on a small piece of paper in his photo album
containing photos of Mustafa. It read "Yes to the
peaceful way to achieve, no agression, no terrorism".

We all know cluster bombs (or any bombs for that matter)
are wrong. We all know that America and Britain does
little to clear up sites after they have cluster bombed
them. The Americans only cleared this site because they
wanted to use it for themsleves - not for the safety and
well-being of the Iraqi people (they would not have used
them in the first place if they had cared about that).
But what this shows is that even when a site is cleared
thoroughly and even when it is believed to safe, it may
not be - there still may be one cluster bomb lying there
undiscovered as Mustafa found to his cost. Their use
should be stopped and we, as peace activists, should do
more to stop it.

I borrowed a photos of Mustafa from Shu'aib's small
photo album, faithfully promising to return it to him
the next day - I have scanned this photo and sent it to
you. the next day I returned to the Sheraton/Palestine
Hotel complex to give it back to him, but he was not
there. I asked after him. Shu'aib had not been allowed
into the complex and the American soldiers had told him
"This is not a place for vigils." "No", I said, "this is
a place for making money out of Iraq".