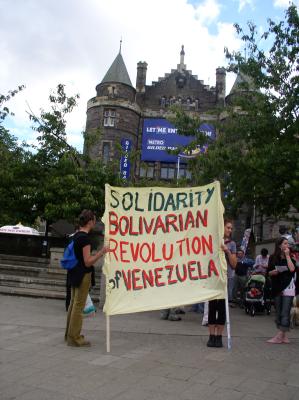 start of demo at Bristo Place, in the background festival venue 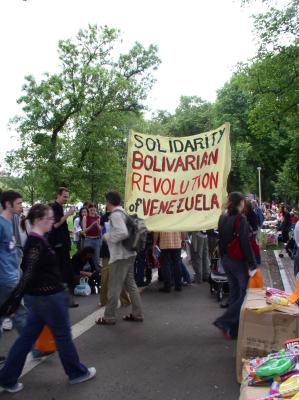 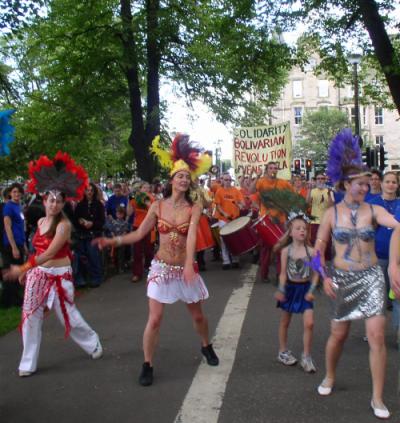 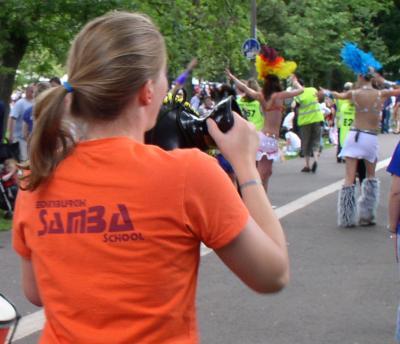 and borrow us their publicity 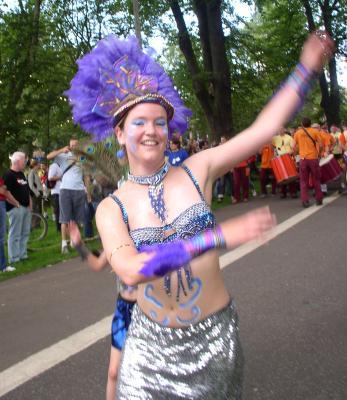 with a little help from the samba school 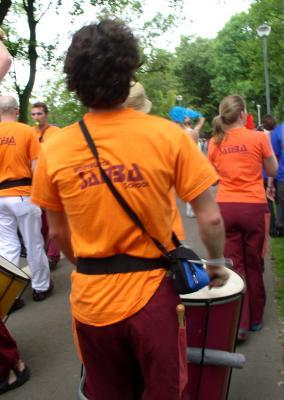 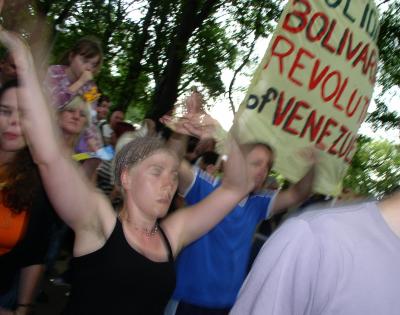 "If I can't dance it is not my revolution" - E. Goldman

Here is the text of the leaflet.

In Venezuela on August 15th there is a national referendum to reconfirm Hugo Chavez as the democratically elected president of the Bolivarian Republic of Venezuela.

President Chavez was first elected by the overwhelming majority of Venezuelans in 1998. Since then, there has been a series of democratic reforms approved by the people through seven electoral processes. The reforms include a new, progressive constitution based on the participatory democracy, real access to education, eliminating illiteracy, laws benefiting small farmers and fisher people, and massive health care, housing and food distribution programs. These changes, initiated by the people and supported by the Chavez administration, have alleviated poverty, empowered the population and adressed the inequalities created by the neo-liberal IMF/Worldbank policies.

However, these popular initiatives are being intensively attacked by the wealthy Venezuelan ruling class, corporate media, and US/European corporate interests. These attacks led to a media-staged, fscist coup d'etat in April 2002 that overthrew and jailed Chavez, imposing an un-elected businessman as president in his place. For the next 48 hours there was a massive popular uprising during which many people died from brutal police force. Ultimately, the presidential palace was re-taken by the people and loyal military troops, allowing Chavez back into democratic office. In spite of this popular victory, the counter-revolutionary attacks continued with a business-led oil strike and violent provocations (embassy bombings and street shootings) used to scandalize the reputation of Chavez.
Until now, the people continue to organize and succeeded in defending the revolution.

On August 15th thereferndum vote will be used by the opposition as another attempt to oust Chavez. In spite of ferocious campaigns by the private media, the majority of the Venezuelan people want to keep Chavez as their president. Even if the electoral council confirms Chavez victory, the attacks against participatory democracy will not cease but in fact be stepped up. But this struggle is not only about Chavez. As in many other parts of the world, the Bolivarian Venezuelan movement is about defending the right of self-determination, autonomy, participatory democracy, and the dignity of everyone. It is about affirming the people's will to find an alternative to dominant neo-liberal policies and challenge global corporate power. For us, it is a duty to express solidarity with the Bolivarian struggle of Venezuela.

We support the call for a Clobal Day of Action on October 12th, 2004