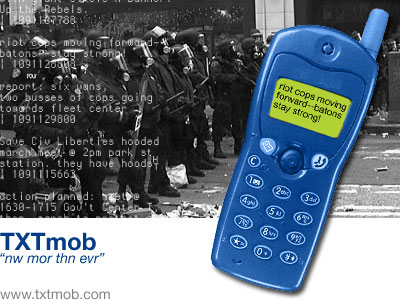 The service allowed users to quickly and easily broadcast text messages to groups of mobile phones. The system works much like an electronic bulletin board: users subscribe to various lists, and receive messages directly on their phones.

During the DNC, protest organizers used TXTMob to provide activists with up-to-the minute information about police movements and direct actions. Medical and legal support groups also used TXTMob to dispatch personnel and resources as the situation demanded. According to TXTMob developer John Henry, over 200 protestors used the service during the DNC.

"Obviously, we would have loved to announce TXTMob before the convention began, but were concerned that the police might try to block our communications," said Henry. "Frankly, it's a little ridiculous that we have to go to such lengths to help people exercise their first amendment rights , but I guess these are the times we live in."

TXTMob was produced by the Institute for Applied Autonomy (IAA), an art and engineering collective that develops technologies for political dissent. The IAA worked closely with the Black Tea Society, an ad-hoc coalition that organized much of the protest activity during the DNC, to design the system. According to a Black Tea member who chose to remain anonymous, "TXTMob was great! When the cops tried to arrest one of our people, we were able to get hundreds of folks to the scene within minutes."

While all the people resisting the RNC over so many days at so many locations is an amazing statement against the Bush administration and the Republican agenda, the massiveness of it all does present a logistical challenge the activist on the street. How to stay informed? How to know where things are happening? How can so many people spread out over the entire city work together more effectively? The NYC Comms Collective, along with the folks at txtmob.com are ready to help answer those questions. We have a put together a network of scouts and other trusted contacts who will feed the information they gather to your cell phone via text messages throughout the protests, from Critical Mass on Friday to the UFPJ March Sunday, the Poor Peoples' March on Monday, and through the A31 day of action.

Our goal is to provide activists on the street with accurate and timely information so that you can stay safe and work together. We're here to provide information, not orders from on high: what you do with the information is up to you.

Our primary tool for disseminating information will be an SMS (ShortMessage Service) system, which send text messages straight to your cell phone.

Messages will be sent only by the NYC Comms Collective and information will only come from trusted sources. This strategy will keep the volume of messages to a reasonable level and ensure the accuracy of information that goes out.

For more information on the NYC Communications Collective please visit

See you in the street!

FOR COVERAGE OF RNC CONVERGENCE AND MOBILISATION SEE: