DO THEY WANT TO STOP US DEMONSTRATING AT CAMPSFIELD ALTOGETHER?

The police have, in the last few months, started to use intimidating tactics against what are normally peaceful and not very large demonstrations at Campsfield immigration prison. On the latest one, the intimidation reached heights of absurdity. 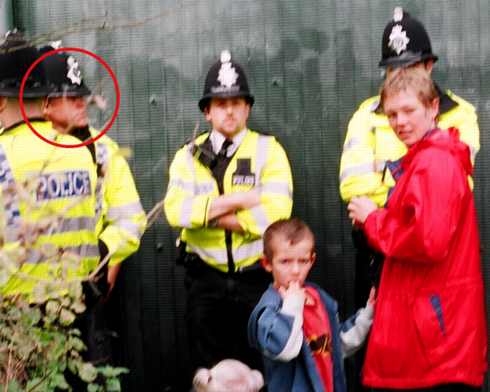 For the last ten years we have demonstrated outside Campsfield immigration prison from 12 to 2pm on the last Saturday of each month. We start at the front and go round to the back where we can communicate with the detainees inside. On bigger, national or anniversary, demonstrations, there is usually a large-ish police presence. Otherwise, until recently, the police usually sent a car, looked around to see if there was anything unusual going on, and left.

At the tenth anniversary demonstration, in November 2003, the police cordoned the demonstrators in the car park at the front, harassed us as we left Oxford and arrived from London in coaches, and refused to allow us to follow our usual practice of going round the back. Since then, in what some of the police told us they call Operation Overkill, they have been sending out a minibus load to each demonstration, sometimes outnumbering the demonstrators, and varying in their aggressiveness, it seems, according to which individual officer was in charge.

On August 28 2004 Sergeant Rigley [Thames Valley Police 3513] was, as he had been on a few previous occasions, in charge. He started into us at once, saying he would arrest us if we banged the fence or tried to communicate with detainees in some unspecified inappropriate way. Having failed to convince us that we would upset the detainees, he said our protests might create disorder inside. Six police accompanied us round the back. One of them ‘entirely agreed’ it was ridiculous and wasteful they were there in such numbers.

Once at the back, someone gave a tentative kick to the fence. Sergeant Rigley pounced. If we did not immediately leave and stop our protest he would, he said, have to arrest us. Since we did just about outnumber the police, he clearly could not carry out his threat. He fell back on the position that we must not be on the strip of concrete along the fence. His officers forcibly removed a few of us, including a woman whose child became very distressed, and left us sitting on the nettles a few feet from the fence. Next he tried the line that if we did not leave, visitors would not be allowed in that afternoon. We carried on shouting our protests and greetings, playing musical instruments and singing the Internationale and the Red flag, to much applause and clapping from inside. We left, to our shame, about ten minutes earlier than we normally do.

The question, it seems to us, is whether the authorities have decided to try to intimidate us out of demonstrating at Campsfield at all. If so, the explanation is presumably that there is official anxiety that protests outside Campsfield will trigger protests inside. If Campsfield is expanded, or even if it is not, it will sooner or later erupt in violence, as has happened twice before and once, to devastating effect, at each of the government’s new super prisons for migrants and refugees at Yarlswood and Harmondsworth. Innocent people do not take kindly to being locked up without charge or time limit, or to brutal treatment by racist private security guards.