This is a short report of the Iraq war crimes tribunal which took place in New York on Thursday 26th August. 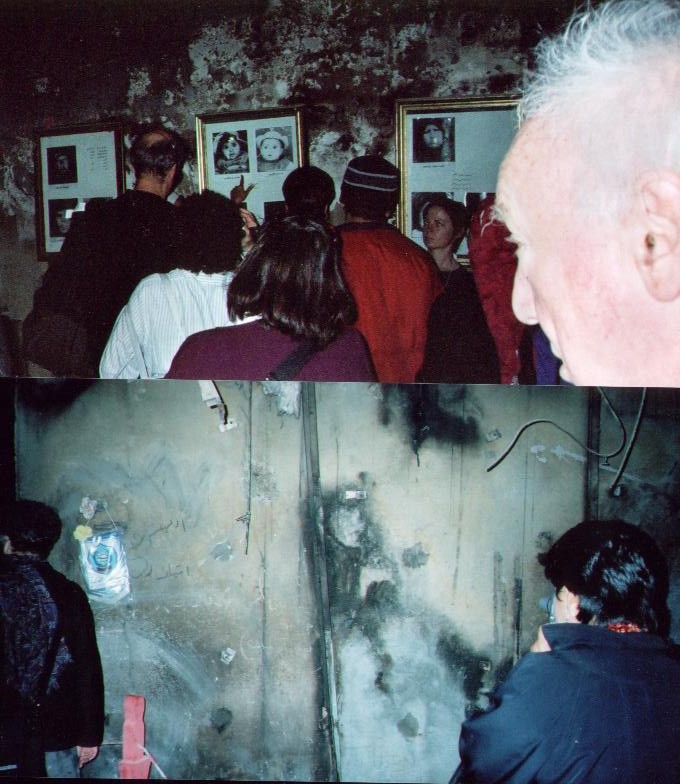 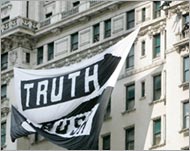 `Drop Bush not bombs` outside the Republican Convention in New York.

500 at ‘war crimes tribunal’ find Bush guilty
August 28, 2004--More than 500 people assembled in New York’s Martin Luther King, Jr. Auditorium concluded the War Crimes Tribunal with a resounding unanimous vote of guilty, declaring the Bush administration guilty of war crimes, crimes against humanity, and crimes against peace.
Declaring the Bush administration a criminal regime, this meeting, which drew speakers and participants from around the world, defended the right of GIs to resist illegal orders to fight against the people of Iraq, expressed solidarity with the Iraqi resistance and declared itself in solidarity with the upcoming Week of Resistance in New York City against the Republican National Convention.
At the tribunal, eyewitnesses of events in Iraq, expert witnesses, organizers of tribunals in other countries, and GI resisters, veterans and their families testified to the facts regarding a series of 19 charges against the Bush administration in an indictment prepared by former U.S. Attorney General Ramsey Clark (see www.PeopleJudgeBush.org). Clark summarized the case and called for the guilty verdict.
Tribunal organizers and political activists came from Japan, Germany, Turkey, Spain, India, Haiti and Palestine.
A GI currently in Toronto, Canada, Brandon Hughey, sent a video message saying why he was refusing to return to Iraq. Gerry Condon, a Vietnam-era soldier who refused to oppress the Vietnamese and spent six years instead in Sweden and Canada, described the Canadian network to support GIs who refuse to kill Iraqis.
To attend the tribunal, the audience and the organizers defied attempts throughout the previous week to make the auditorium unavailable and faced down an enormous police presence on the day of the hearing. The police set up security check point that many said was more intense than what they experienced when boarding a plane. Entrance included body scans, bag checks, and a massive police presence. Tribunal organizers were charged thousands of dollars extra fees for “security.”
The Tribunal went forward despite the oppressive atmosphere and attempts by the Bush and Bloomberg administration to criminalize and shut down dissent in the city. Rather than being shut down, the Tribunal expressed a determination to confront the City and police restrictions, and to be in the streets and in Central Park.
Tribunal organizers joined a news conference Aug. 27 at City Hall to defend the rights of protesters and to support the right of people to go to Central Park despite Mayor Bloomberg's refusal to grant permits.
The tribunal was the first major action of the week of resistance against the Republican National Convention. Tribunal organizers said they wanted to give a clear anti-war message during the protests. People attending the tribunal picked up signs to take into the streets with a picture of Bush and the words, "Guilty of War crimes."
Tribunal organizer Sara Flounders of the International Action Center said, “We will be in the streets non-stop protesting the Bush policies of war and occupation of Iraq. But shortly after the RNC, we expect to have videos and documents of the entire Tribunal available. I invite those interested in a record of this powerful testimony to contact us.”
Flounders appealed to the tribunal supporters regarding the latest repressive steps. “Due to the enormous expenses and extra charges involved in the tribunal and in maintaining a resistance center at the International Action Center office this week, and in continuing to mobilize resistance, we appeal to people to contribute at

Anti-Bush protests sweep New York
New York has been awash with street protests before this week's Republican convention to nominate US President George Bush for a second term.
On Saturday, thousands of abortion rights activists holding pink and black placards marched over the Brooklyn Bridge in support of women's constitutional right to have an abortion.
About 2000 people opposed to the Bush administration's military and diplomatic responses to the 11 September 2001 attacks surrounded the destroyed World Trade Centre site and solemnly rang bells.
Opposition
"We felt September 11 was being appropriated by Republican spin doctors and they were turning it into a grotesque endorsement of world domination and domestic repression," said demonstration organiser Christian Herold.
The Republican convention to confirm Bush as the party candidate runs between 30 August and 2 September.
The largest anti-Bush demonstration is scheduled for Sunday, when an estimated 200,000 people are expected to march past Madison Square Garden to decry the US-led war in Iraq.
On Friday night, 264 people were arrested when about 5000 cyclists rode through New York streets, some past the convention arena, shouting "No more Bush".