CO-OFFENDERS DO NOT REBUFF UN ON 'ILLEGAL WAR' 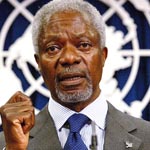 The 'coalition of the killing's' complicities - the US, Britain and Australia - have insisted that their countries' military action in Iraq was legal after they have committed war crimes against humanity.

US President George Dubya has disputed comments made by United Nations secretary-general Kofi Annan that the war in Iraq was "illegal" under the world body's charter, saying that the UN approved the invasion.

So if the UN made the statement then who is George Dubya to argue in the face of the rest of the world that they somehow had received approval for a pre-emptive strike on a sovereign nation, when that had never been legal in the eyes of the world? After all it wasn't Dubya's statement it was Kofi Annan's and the UN as well as billions of people around the globe.

"The legal advice that we had, and I tabled it at the time, was that the action was entirely valid in international law terms," he said.

Bullshit! You were told so many times your rodent that you should not lie to the Australian people and you knew that the war was illegal and in fact went to war before your alleged tabled advice in anycase.

His view was echoed by Prime Minister Tony Blair's office, which said the British government's top lawyer - Attorney-General Lord Goldsmith - had reached the same conclusion before the invasion was launched in March last year.

But he was on your side Tony and together with your co-offenders George Dubya and Scumbo John Howard decided to breach International law.

All three governments face elections in the near future.

The US President did not directly address Mr Annan's comments, but he referred to the Security Council's unanimous endorsement in November 2002, of resolution 1441, which warned Saddam Hussein he would face "serious consequences" if he was still seeking weapons of mass destruction.

"The United Nations looked at the same intelligence I looked at," Dubya said.

"They concluded Saddam Hussein was a threat. They voted by 15-0 in the UN Security Council for Saddam Hussein to disclose, disarm or face serious consequences.

But serious consequences under existing law doesn't mean blowing a country to bits surely? It doesn't mean killing tens of thousands of innocent people in order to achieve your goal surely?

DUBYA: "I believe when bodies say something, they better mean it."

The United Nations on said Mr Annan's statement saying his position on the war had long been well-known.

Annan feels it is no different from what he has been saying for more than a year, and that position is very well-known to member governments," UN chief spokesman Fred Eckhard told reporters.

The billions of people around the globe knew it as well. This was a war crime and was illegal and the killing of innocent people and subsequent torture was degrading.

Bush suffered an embarrassing blow when the vast caches of Iraqi weapons of mass destruction at the core of his public case for war did not materialise.

The bloody chaos in Iraq and rising death toll among US forces pose a threat to his hopes to win a second term in November's presidential election.

After vowing to bring a second resolution before the Security Council, Dubya gave up on the effort when it became clear that opposition from France, Russia and other members would lead to a veto.

US State Department spokesman Richard Boucher denied that Washington needed a second resolution after UN Security Council Resolution 1441 and other UN resolutions that preceded it.

"There were, as we've pointed out before, 17 resolutions, including Resolution 1441, that detailed Iraq's obligations, its refusal to disarm and the consequences for non-compliance," he said.

"So we think that was a very solid basis, legal basis, for the war. And that's the basis on which we proceeded."

The US ambassador to the United Nations at the time, John Negroponte, had said Washington reserved the right to act if the world body did not, but also said that 1441 was not UN authorisation for US military action.

"This resolution contains no hidden triggers and no automaticity with respect to the use of force," he said.

No War and Blair Out