On Monday sept 13, the Nukewatch phonetree was triggered. There was a sighting of a Nuclear Weapons convoy
travelling north from Burghfield. 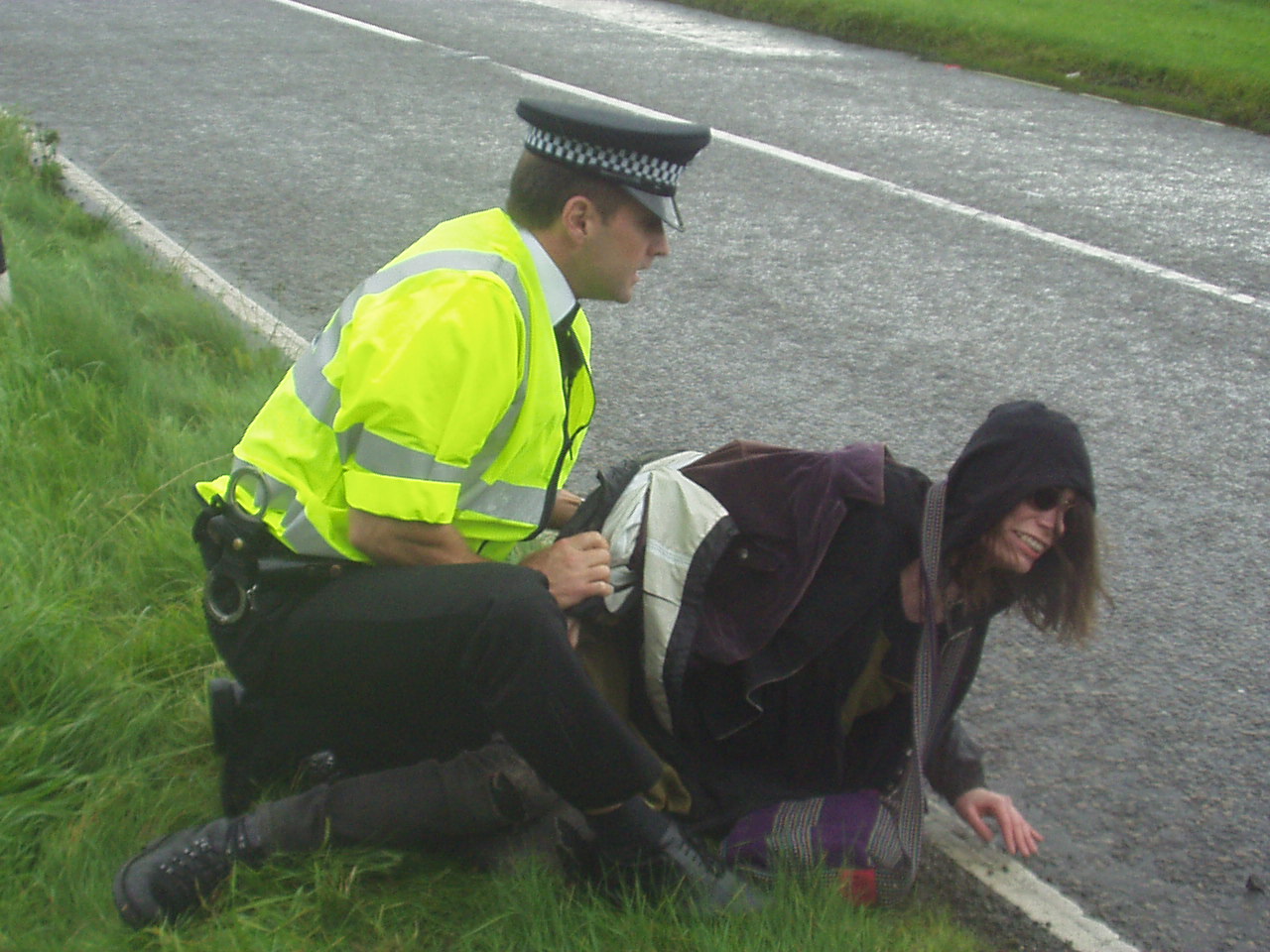 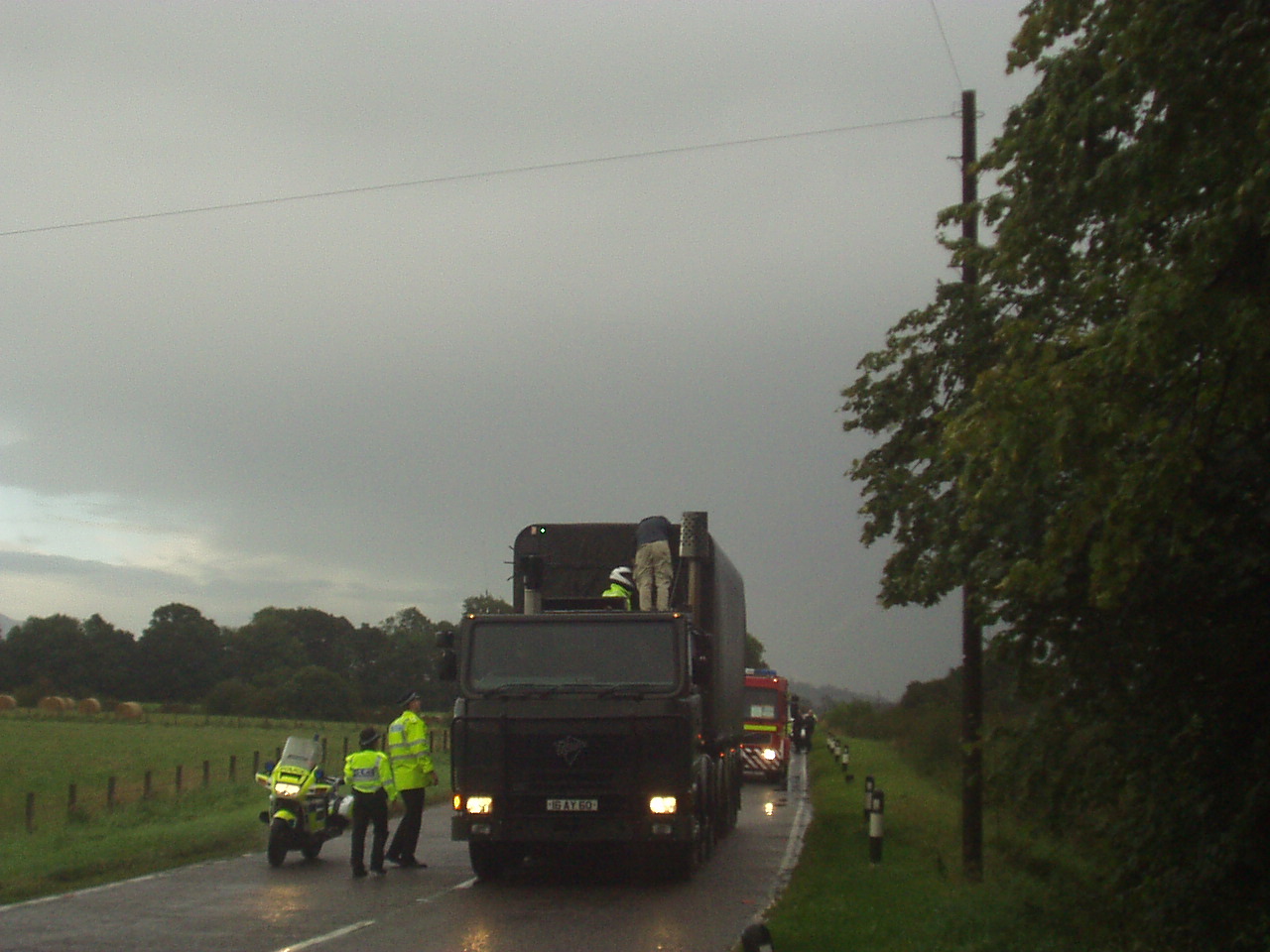 Phill on top of the lorry - Picture Trident Ploughshares 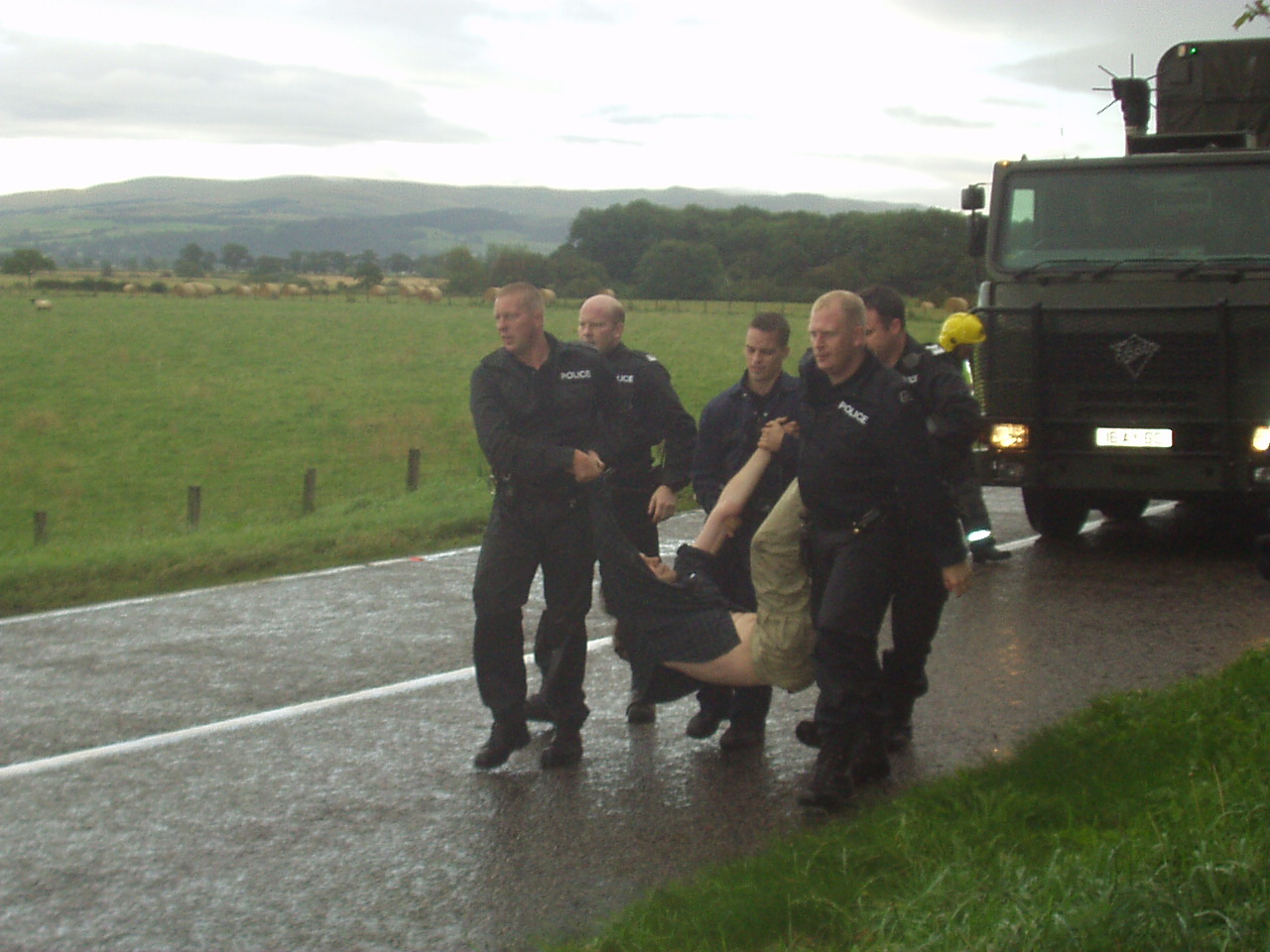 Britain owns 200 nuclear warheads each 8 times stronger than the one that exploded
above Hiroshima. The nukes are stored and handled in
Coulport in Scotland. These scary nuclear
Weapons of Mass Destruction are of a delicate design and they need to be checked regularly. That's
why the nuclear warhead convoys are a regular feature on the English and Scottish roads. The nukes
are maintained in Burghfield
in the south of England.

Why the MoD chose to build the home in the north and the maintenance facilities in the south and so far apart
remains a mystery to me. But the long distance between those locations means that it takes the convoys 2 or 3 days
to make a single trip. The lorries that carry them are also so large and heavy that they can only take certain
routes and can only stay at certain -overnight stop- places. The fact that the convoy is so predictable
makes it not really hard to spot them by our network (or any one else for that matter)

#file_1#
Let it be no surprice then that we managed to intervene with the transport once again!:
SCND hired a minibus and we drove to Stirling to intercept the convoy there. Regretfully the MoD police spotted us
and sent Stirling police our way to guard us and prevent us from stopping the convoy. That is where the police
harasment started. Police officers outnumbered us by two to one and followed us everywhere we went. In my case,
there were two
police officers who positioned themselves between me and the road. One of them took the pose of a goal keeper
who was about to receive a penalty shot. All I could do was play a bit with him to test his reflexes. I assure you that
was very funny. (grin)
What was less funny was that Roz was prevented in her human rights to roam, she was fysically restrained by a policewoman
to go where ever she wanted to go and to safely cross the road. Even when there was no traffic and no sighting of the
convoy yet!

Regretfully we had to let the convoy pass by unhindered. So we got back into the van and bypassed the convoy at
a layby a bit further where it had parked. On the same spot as usual. Very predicable breaks they have!.

We pulled over to let some people who wanted to go home get into another vehicle before we drove further to Balloch.
Atleast that was the intention.
The police thought different, they decided to block our path with their own vehicles and harrassed us
with a very thorough illegal vehicle search, further illegally and in one case physically restraining our freedom to roam,
following us everywhere we went.
They obviously were not going to let us get anywhere until the convoy passed. Boy did they underestimate us all!
All they did was to choose the location of the action for us.

When the convoy passed by, we managed to evade the outnumbering policenumbers and Roz, Seinaid, Beth and Ludd managed to
get on the road in the path of the last truck and Phill managed to climb on the roof of the truck. Thus breaking up the convoy and bringing it to a standstill for a half hour!

Crap arrest goes to Tony. He was arrested for pretending to want to go into the road and clapping his hands while chearing us on and his arrest brought to total number of arrests to 6.

Roz was released after a few hours, Tony's and Beth's charges were dropped minutes before their court appearance the next afternoon.
Seonaid, Phill and Ludd are all told to come back to Court in Januari next year. We are charged with "Breach of the Peace". But pleaded "Not Guilty".

Oh Irony! We are trying to prevent millions of people being incinerated on the spot in a possible full scale nuclear war
or accident and we are accused of Breach Of the Peace! It should be the other way around!

We could do with more people to help us stop the convoys. Although welcome and encouraged, it is not necessary to be arrestable! We also need people to
witness and cheer, take pictures, hand out leaflets, do press and indymedia-work and look after our stuff, make food and prisonsupport etc,...
Feel free to contact us for more information!
SCND
info(at)scotland.motherearth.org

Beth, Tony, Roz are with Faslane Peace Camp
Phill and Seonaid with Scottish CND
Ludd with For Mother Earth Scotland.
Supporters were also from Stirling CND


For information what a nuclear explosion would do to you and your environment, follow this link to Youthzone

See Yorkshire CND for more information on the convoy