If you thought £40K from the GLA on an ESF website was bad - then check this out!
Great comments from people on bbc website:

What do you think of the new G8 logo?

The new logo unveiled for the planned G8 Gleneagles summit next summer has been described as a thistle with a "modern twist".

The Scottish Executive believes the design - which cost £40,000 - has captured traditional and contemporary images of the country. The summit at the Gleneagles Hotel in Perthshire in July 2005 will be the main event of the UK's presidency.

But is the logo an adequate reflection of the UK's role? Do you agree it reflects Scotland's traditional and contemporary image? Has it been worth the money? 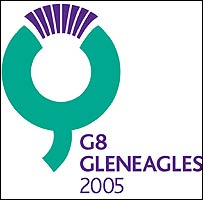 What do you think of the new G8 logo?

The new logo unveiled for the planned G8 Gleneagles summit next summer has been described as a thistle with a "modern twist".

The Scottish Executive believes the design - which cost £40,000 - has captured traditional and contemporary images of the country.

The summit at the Gleneagles Hotel in Perthshire in July 2005 will be the main event of the UK's presidency.

But is the logo an adequate reflection of the UK's role? Do you agree it reflects Scotland's traditional and contemporary image? Has it been worth the money?

The following comments reflect the balance of opinion we have received. Thank you for your emails, this forum is now closed.

Given that the Executive spent around the same amount of our money on developing the excellent "Scotland the Brand" logo only 4 years ago and then turned their back on the entire initiative earlier this year, I feel that they could have saved £40k quite easily. This amount would almost have paid for the new reception desk at the Parliament Building!
Harry McAllister, Kilbirnie


As usual another ludicrous sum is spent on a design that looks like a four-year-old was let loose with half a potato and some emulsion
David, London

This project was obviously managed by the same team that looked after the Holyrood build. £40,000 for this! Someone saw them coming.
Dick , Insch, Scotland

As usual another ludicrous sum is spent on a design that looks like a four-year-old was let loose with half a potato and some emulsion. Couldn't the Executive have got some art students to do it for far less - which would have given the students some much needed income but not cost £40,000?
David, London (ex Scotland)

What can you get for £40,000 these days? A sports car, a holiday home, send the kids to university, employ a teacher for a year, buy in home help for sick and elderly relatives. Yes, for £40,000 you can buy a lot. But know one would think for a moment that a well known international summit needs a £40,000 logo that depicts a prickly weed. It's plainly a stupid idea.
Malcolm, Dundee, Scotland

How imaginative. These corporate bods who dream up these logos really do know how to set the heather alight. Perhaps it was created down the pub?
Frank, Scotland


The logo is great but I can think of at least two Scottish design companies that would have done this for a quarter of the price
Robert Hawkes, Fort William

Thank the Lord that a REAL design agency from London was commissioned for the project. It's wonderful. Who would have dreamt of it? A thistle! They must have been up all night designing it.
Bill Gaughan, Glasgow

£40k for this... Nice to see what our hard earned cash gets spent on... 3 years worth of my wages.
Michelle, Ardrossan, Scotland

£40,000 for that? If they just asked me I would have done it for free on my PC.
Tane Piper, Edinburgh, Scotland

It looks kind of cheap. But then again I suppose the Executive are used to spending much larger wads of public cash!
Margaret, Falkirk, Scotland

Why aren't the BBC focusing on the fact that thousands of pound have been wasted by our public servants? I for one would like to know who sanctioned this massive release of funds so I can personally appeal for their dismissal.
David Anderson, Edinburgh, Scotland

The logo is great but I can think of at least two Scottish design companies that would have done this for a quarter of the price. Why does high value creative work like this always go down to London?
Robert Hawkes, Fort William, Scotland


Is it also a pictorial representations of the green toilet seat all our cash has been flowing into?
Stephen, Scotland

What a waste of money! The logo is so ineffective it needs G8, Gleneagles AND 2005 written underneath it to explain it.
Andy, St Andrews, Scotland

I am a designer and I am sorry to say my granny would have done a better job for a fiver!
Barry, Glasgow, Scotland

What a waste of money! Just think what we'll save when we finally become independent, and won't have to host such an event!! A student design competition could have come up with better at virtually no cost, and would have benefited those involved.
Stephen Shilton, Hamilton, Scotland

When I saw the design I thought my seven-year-old would have done a better job for a bottle of Irn Bru and a 10p mixture.... ps I am a cleaner and could do better blind folded!!!!!
Wee Mo, Clydebank, Scotland

If the Scottish Exec think this has captured the contemporary image of this country. Is it also a pictorial representations of the green toilet seat all our cash has been flowing into?
Stephen, Scotland

When I first saw the logo, I thought 'Not bad. Simple, eye-catching, sort of modern-Scottish'. Read on.... "London-based design firm".... "£40,000!!" Glasgow is home to one of the finest art schools in Europe. Was there really no home-grown talent that could have produced something at least as good as this? I suppose we should be thankful the logo isn't 'See you (jimmy) at Gleneagles'.
Chas, Tokyo

This is awful. The G8 have no place in Scotland...let alone using one of our national emblems. It is a clique of nations that must be condemned. Scotland has no say at this event and nor would an independent Scotland want to be. How about tackling real issues, like global poverty, the AIDs and HIV epidemic and cancelling third world debt? The G8 is useless and is just a talking shop for the countries that want to dominate trade and line their own pockets.
Aileen Campbell, Glasgow

Perhaps we could remind the executive that Scotland has some very talented designers and some of the finest design companies in the UK. Problem with Barry, Glasgow's comments is that his granny wouldn't have been expensive enough at only a £5.
Joe Brown, Edinburgh, Scotland

Why not throw in Nessie, Tartan and see you Jimmy hat - another wasted opportunity to come up with a new, non carrot-crunching image !
Stuart Miller, Stirling

Obvious that £40 000's not coming out of their own pockets. Other people's money is easily squandered.
Anne, Glasgow

I thought the SCOTLAND THE BRAND logo was fantastic, I still get people coming into my shop and looking for items with this logo on them! What a pity this could not have been incorporated for the G8 summit. It is well seen that it was the Executive and not a private company that has commissioned this, as they would simply make do with the one they had already paid for three/four years ago. It is an absolute SCANDAL that this was designed by an English company.
David McGill, Edinburgh


Why not have had a competition in schools for kids to design the logo?
John, Texas

Congratulations, it is absolutely brilliant and to think that they can also ask the G8 for a LOAN to pay for it. When will we all waken up to this absolute lunacy that is prevailing within the Executive when it comes to throwing money away??
G Murray, Ellon, Aberdeeenshire

I like the logo. However why did the money go to an English firm to design it? I'm sure there are a lot of talented Scots who could have done a great job. Keeping the money in Scotland may have been a way to promote the new contemporary Scotland. One the promotes its people first. What a concept.
Dan Stevenson, St.Catharines, Canada

While Scottish design graduates face great difficulties in finding employment for their immense pool of talent, this squandering of money to a foreign firm is insulting to the point of obscenity.
Pat, Helensburgh, Scotland

Why not have had a competition in schools for kids to design the logo? This would have educated the children about the summit and provided an opportunity to showcase Scottish talent - at next to no cost!
John, Houston, Texas, USA

When I was a child growing up in America my granma always wrote to me. She did not want me to ever forget that I was a Scot. On the back of all the envelopes she always drew a thistle. It was much better than the present logo, and I would have been proud for you to use it for free.
Fiona Fraser Richards, U.S.A.


I have travelled to many parts of Scotland and have never seen a thistle look like that
Derek, Falkirk

It reminds me of "The Scream". Screaming is what we should be doing with £40K of our taxes spent on it.
Graeme Wilson, Cairneyhill, Fife

First . Why do they need a logo? Second, Why not a real thistle? I could have sent them one for nothing.
Dave Perks, Hamilton Ontario, Canada

Over 1,600 bottles of Ardbeg down the drain! What a waste!
Wolfgang, Augsburg, Germany

As someone who works in multimedia and design I can say that the design is, well, poor to average. It makes me ask the question is it possible to sue someone for gross neglect in the form of wasting tax payers money?
Dylan Drummond, Dundee

I have travelled to many parts of Scotland and have never seen a thistle look like that. I can only imagine whoever designed it must have drank loads of thistle soup that day. Ouch!
Derek Scougall, Falkirk

It is a clearly particularly appropriate symbol as it accurately represents purple notes of money being chucked down a green toilet seat. They've even shown the drain pipe. The executive only decided in June at a cost of 300K that the Saltire was the best symbol to represent Scotland. This toilet pan symbol is evidently representing something else, such as the executive's ongoing habit of wasting taxpayers money perhaps. Hang one up in the Parliament reception as a reminder!
Craig Cockburn, Scotland