Following information that an attempt was to be made to erect a G3 phone mast on Ecclesall Road, Sheffield, this morning, a large group of residents gathered to protect the site 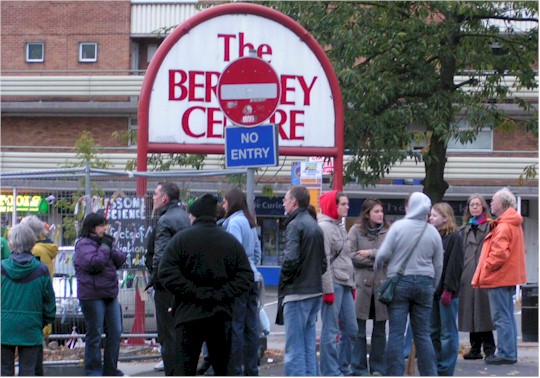 No entry for G3 at The Berkeley Centre

Many people are concerned about the health dangers from the new generation of phone masts that are being erected around the country. Hutchinson have been trying to put one of these in place on Ecclesall Road, Sheffield for several months now. The company prepared the site and fenced it off. This enclosure has been beautified by local people over the summer, first as a living room - complete with sofa - then as a a holiday beach and latterly as a back to school scene. Contracters have attempted to put the mast in place but have been prevented from doing so by local residents.

Information had been received that another attempt would be made this Sunday morning at 6.30 am. Local people began surrounding the site at 6 and by 7 this morning 35 people were there. Apart from circling police cars there was no sign of mast-related activity - maybe they had been put off by the people there - certainly this must be an emotive issue to get this number of people out of their Sunday beds at this hour.

Good, good, this is all good. But it is important to distinguish between the ordinary mobile phone masts, which we may not like, but they are often useful - let's not be Ludite just for the sake of it - but these masts are being put in place so that we can send videos by phone.....?????? Sorry.......

Is this necessary when we have other more efficient and less damaging ways of doing this? Come on.....Make it clear to the mobile phone companies....We do not want this.

Hutchinson owns Superdrug so let's find ways of making it known that we don't like the way they invest their money. Any suggestions for Actions?????

I was there, by the way, I just want even more people to take this seriously.

woken by the owl

but what about the workers

It's good that people are made aware of environmental issues in Sheffield, but have you still got the petitition against the mast situated in Labou Ready: an american multi-national labour agency, which specialises in hard dangerous manual work, or is it that only nice middle class lives are important, not the unemployed, refugees, etc, pushed into 'signing on' for casual labour with no rights or conditions.

I may be wrong but as far as I know, their long term dangers are unkown, so I don't see putting them up as being very sensible. But, I bet the vast majority of people reading this have mobiles (not me-no need for one-hah!) and I am always hearing people moaning when they can't get a signal... rings (boom boom!) of double standards I reckon. Plus, the only place I have seen local protest is in the nice suburb of Hunters Bar...a mast seemed to go up without any fuss in Gleadless Valley...not in my backyard hey!

"Not in my back yard"

"Not in my back yard" best sums up many of the protests against phone masts. It is a fact that we need phone masts, attested to by the fact that the vast majority of us (including the protestors) actually have mobile phones. Not only that, but mobile phones have become an invaluable tool for activists. So, the only thing I can think of is that the anti-phone mast lobby want the benefits of the technology but don't want any overt signs of it spoiling their privelaged view.

The "safety" issue is a red-herring. The science has been shown to be safe - safer than microwave ovens and PC-screens, yet self-styled ludites want to get into a knot over it. These same people are thumping on about wind generators - they're "ugly" they say - so we're condemned to another fossil-fueled and nuclear future simply because some can't (or won't) develop a modern aesthetic.

Not in my Back Yard should not be seen as a term of abuse - protecting your community/family etc is a good thing in general, and it is through people's backyards that many have started to see and experience the wider picture, and how it's all linked up. The road protests in the 90s are an example.

It is not a fact we need mobile phones - we managed before they existed (& we'll manage after they cease to exist!), if you can remember....!!

They may be a useful tool for activists, and many may have them, but it doesn't mean that you should automatically dismiss people. People do their best, they try to change the world to a better place - to expect anyone to be perfect is a ridiculous ploy often used by people as an excuse for their own inaction. (PS I don't have a mobile, but some of my best friends are mobile-phone users!)

"Self-styled" is also a term just used to be instantly dismissive - it means nowt. And to say people opposing phone masts are also the same people as are opposing wind farms, supporting nukes, eating babies etc blah is nonsense too.

asdf, why is it "better" not to have mobile phone masts?

There are a lot of things we "got along fine without before" but that doesn't seem like a compelling reason in itself not to have them now.

Mast to be installed this Sunday, Oct 10th

The police have official told the action group that the contractors will attempt to install the mast at Berkerly Precinct this Sunday, Oct 10th anytime from 4 am