Alicia Gonzalez Gaitierrez, Prof of Languages and International Relations and Ivette Vega Hernandez, Psychologist and involved in producing Muchachas and Mujeres, two women’s tabloids, came and spoke at the Oxford Town Hall. They are both involved in the Federation of Cuban Women. 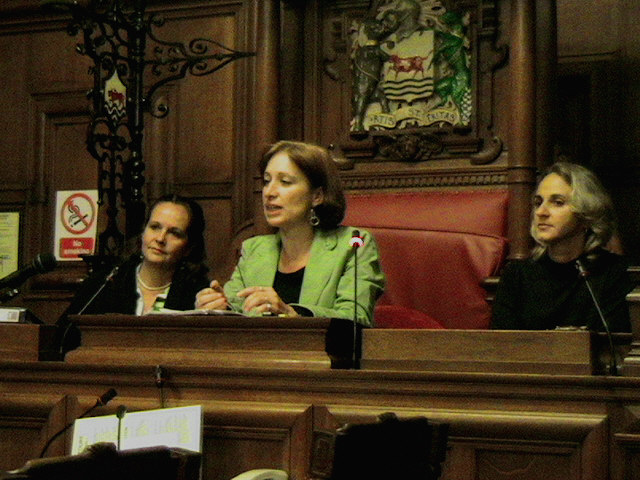 7.10.04 Before going to the ESF in London Alicia Gonzalez Gaitierrez, Prof of Languages and International Relations and Ivette Vega Hernandez, Psychologist and involved in producing Muchachas and Mujeres, two women’s tabloids, came and spoke at the Oxford Town Hall. They are both involved in the Federation of Cuban Women [FCW].
They told of how much progress women have made since the Revolution 45 years ago. When the FCW was started by a woman industrial chemist in the sugarcane industry, Fidel Castro was enthusiastic that ‘50% of the population would help to make the revolution happen’. Achievements include all women having equal pay since 1959; nearly 36% of MPs are women and 49% of the judges and 47% in the Supreme Court. This has helped to develop justice in favour of women. In education and health 70% of the workers are women and 60% of lawyers. The birth rate has fallen to 1.6 per woman which could present demographic problems in future and is unusual in a developing country.
At the beginning there was male resistance to allowing women to go out to meetings but today more that 85% of women belong to FCW. This presents a challenge to be more efficient and organise such large numbers. In preparation for their next congress they are starting with grassroots meetings in the 169 municipalities. No women want to go back to the past.
An area of development is the new branches of universities in municipalities where 40% of students are women. Computing skills are taught in all primary schools and is available in social centres including the 180 FCW orientation houses for women.
We were told that problems exist in the provision of suitable buildings for child care, although when available the fees are dependent on income. The government is able to provide materials for rebuilding all the homes damaged in the hurricane but because of the 45 year blockade there continue to be funding problems for new housing resulting in serious crowding with many three generation households. Young people complain about lack of fashionable clothing.
We were excited to hear Alicia and Ivette speak about the social revolution and the need to defend this and try not to loose what has been gained. ‘We must combine individual dreams with the dreams of everybody. The whole of humanity will be advanced by the advances of women’.