This is a 1,600 word report with photos of the Declaration of Independence on Edinburgh's Calton Hill on Saturday October 9th 2004. This was the alternative to the bowing and scraping on the Royal Mile that same day. 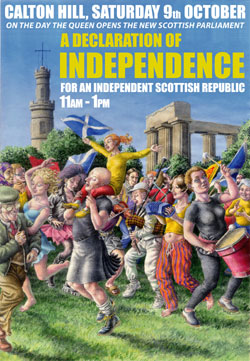 Flyer for the day. 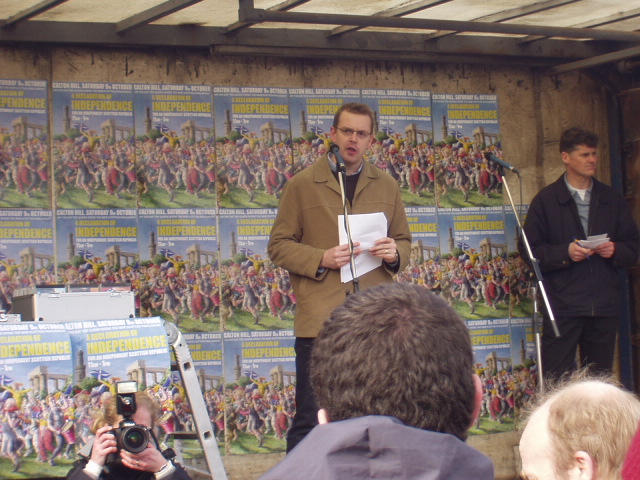 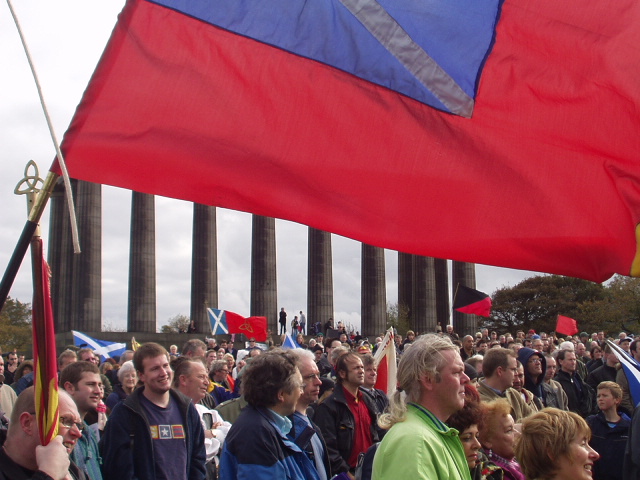 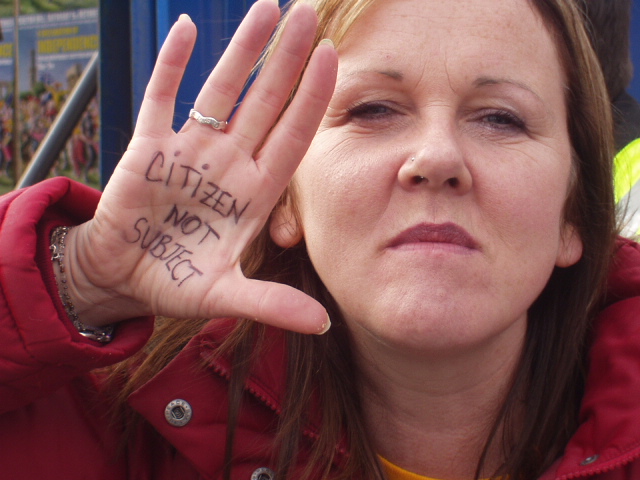 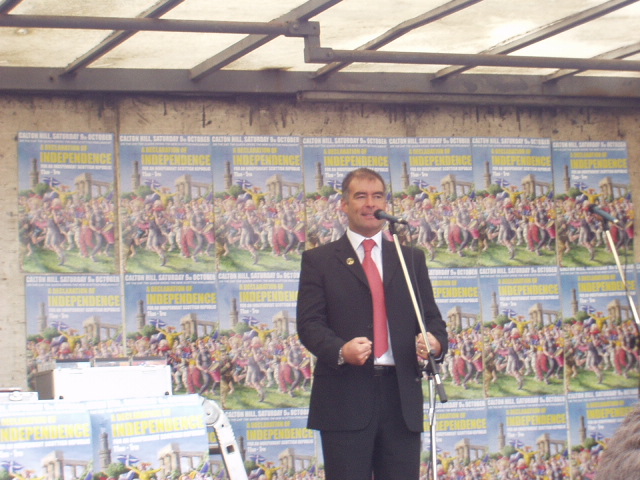 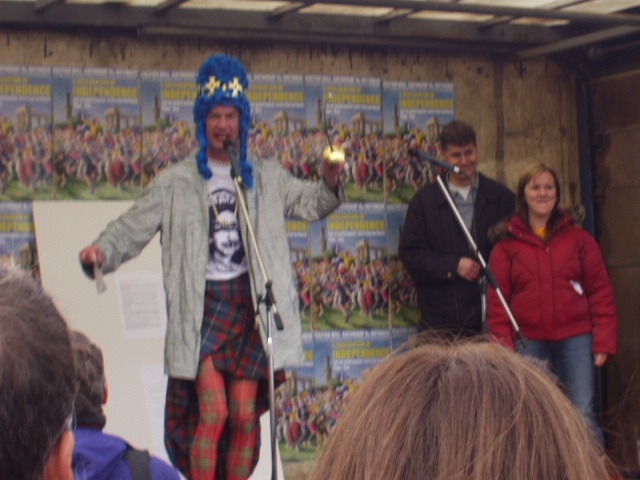 On Saturday 9th October Liz (oops, sorry, her maj) officially opened the new £431 million Scottish Parliament building at Holyrood. It was revealed that no one would face criminal charges over the fiasco of overcharging. The Crown Office and the Procurator Fiscal have found no grounds for complaint after a probe into the awarding of contracts for the Holyrood site. It had been claimed that one company, Bovis, was given an unfair advantage when bidding for work on the project.

There was an alternative event just over a mile away atop Edinburgh’s Calton Hill. The Scottish Socialist Party drew up a declaration of independence calling for “an independent Scottish republic built on the principles of liberty, equality, diversity and solidarity.”
The declaration of Calton Hill ran from 11am till 1pm and there was a signing ceremony at noon. A crowd of around 500 gathered on a dry, overcast autumn day to hear speakers and entertainers.

The sound of a flypast by an RAF reconnaissance aircraft at precisely 11.01am signalled the beginning of the `Riding`, the Queen’s procession down the Royal Mile dating back to the 17th century. It also signalled the start of the alternative on Calton Hill.

MSPs Colin Fox, Rosie Kane and SSP leader Tommy Sheridan spoke. There was a hilarious impersonation of the Queen by Tam Dean Burn and the old 1970’s Sex Pistol’s classic `God save the Queen` was played.

Colin Fox acted as MC and read out messages of support from authors A L Kennedy, Alasdair Gray, Iain Banks and Irving Welsh. Singer Eddi Reader who performed at the parliament also sent her regards.

Ian Hamilton QC spoke and said that in the `republic created that day` he would say “Farewell Britannia, advance Scotland!”

Colin said there were many international messages of support and there was a female Basque speaker who said the crowd was making history that day. There was then a song from singer Barbara Scott and then law professor Adam Tompkins of Glasgow University reminded the crowd of the Queen’s previous reluctance to pay tax despite her massive income. He said that the queen had special powers or `prerogatives`, which included being able to appoint anyone she liked as Prime Minister. You cannot sue the monarchy. He said Tony Blair used these special powers to attack Iraq and there would have no Iraq war without the crown. In a democracy it is the people who are sovereign and not the crown! He urges the abolition of the monarchy. “If you want democracy down with the crown!” (Cheers)

Campbell Martin, MSP for the west of Scotland, who had spent 27 years in the SNP said he was genuinely and bitterly disappointed that the SNP weren’t there that day. He said the SNP were down at the parliament bending their knee to the Queen. The British establishment no longer feared the SNP - they feared the ordinary people. He called the SNP `tame jocks`. He said that devolution just meant no power, no hope with the parliament dealing in issues like dog poo and high hedges. He added that Scotland should be a safe destination for people fleeing persecution. He finished by calling for a free, democratic, independent, socialist republic.

Colin told an amusing aside about his embossed invitation to a reception with the Queen and the Duke of Edinburgh at the palace of Holyrood house. He declined!

Next was entertainer Raymond Mearns who read out a humorous poem as a police helicopter hovered nearby.

Mark Brown of the Glasgow campaign to welcome refugees thanked the MSPs who backed the campaign including Sandra White and Patrick Harvie of the SNP as well as the Greens and individual members of the Labour Party. He finished by saying: “Refugees welcome here, no problems!”

Then there was some music from Dale Glencross who played “A Scottish soldier.”

Scottish Socialist Party leader Tommy Sheridan received a huge reception when he came to speak saying:
“If you look around you will see a future hope for a new Scotland, you will see a number of individuals who are determined to claim their rightful place on this planet, no longer as subjects to a diseased establishment elite but to take their place as citizens of an independent Scotland!”
He went on: “Let’s be clear, we all have our own hopes, our aspirations, our dreams for a new Scotland, some of us believe in a socialist Scotland others want a social democratic Scotland. This movement today I hope is the beginning of a new movement that unites citizens across party boundaries, across the whole of Scotland and becomes an annual ongoing event to build for a future independent republic of Scotland!”
He went on to give his vision of a nuclear free Scotland and a Scotland free from the Royal Prerogative. He referred to Holyrood as a `kiddie on parliament` where even a minimum wage could not be implemented.
“The only Unionism that we want any truck with is trade unionism.” (Loud Cheers)
He asked rhetorically: “Do you we belong to the British Nation or do we belong to the Scottish nation?” He said we should offer the hand of friendship and not the fist of fury to every man woman and child who wants to come and live in our nation.
“We want an independent Scottish republic to knock down the existing walls and build a proud nation of tolerance and friendship and peace across the world!”
He finished by announcing that he and his wife Gail were expecting there first child who he hoped would emerge with a clenched fist in one hand and a wee red flag in the other!

Next Rosie Kane MSP then read out the Declaration of Calton Hill, which is listed at the bottom.

Colin Fox said the event had been a great success and introduced the `his majesty the dean` entertainer Tam Dean Burns who gave a hilarious send up of the Queen joking that the crowd were behaving as citizens and not her subjects.

The event finished with the playing of the 1970’s Sex Pistol classic `God save the Queen` and with dozens going to the unfinished monument `Edinburgh’s disgrace` with their banners and flags.


Five photos of the day are attached along with a flyer for the day.
Declaration of Calton Hill, 9 October 2004
We the undersigned call for an independent Scottish republic built on the principles of liberty, equality, diversity and solidarity.
These principles can never be put into practice while Scotland remains subordinate to the hierarchical and anti-democratic institutions of the British State.
We believe these principles can be brought about by a freely elected Scottish Government with full control of Scotland's revenues.
We believe that the right to self-determination is an inherent right, and not a boon or a favour to be granted to us whether by the Crown or the British State.
We believe that sovereignty rests in the people and vow to fight for the right to govern ourselves for the benefit of all those living in Scotland today, tomorrow and in future times.
The Government of a country is servant to the people, not master of the people.
We believe that a written Constitution will guarantee, under law, everyone's right to freely vote, speak and assemble; and will guarantee the people's right to privacy and protection, and access to information on all its Government's doings.
We vow to fight for the power to refuse to send our sons and daughters to kill and die in unjust wars in foreign lands.
We vow to fight for the power to banish nuclear weapons of mass destruction from our land.
We vow to fight for the power to acquire and restrict the use of property or lands controlled by individuals, corporations or governments from beyond Scotland's borders.
We vow to fight for the power to turn our depopulated land into a haven for those fleeing famine and persecution.
We vow to fight for the power to build a more equal society, free of poverty, through the redistribution of our vast wealth.
We vow to fight for the power to protect our soil, seas and rivers for our children and for the generations to come.
We swear to oppose all forms of national chauvinism, imperialism and racism.
We swear to oppose all forms of discrimination on the grounds of gender, ethnic origin, religion, place of birth, age, disability, sexuality or language.
We aim for an independent Scottish Republic in which people may live with dignity and with self-respect, free from exploitation, assuming the responsibilities of free women and men.
An independent Scottish republic will negotiate freely and as an equal with governments of other lands.
Our aim is not to erect walls of separation, but to build an outward looking, Scotland that will extend the hand of friendship to all the peoples of the world.
We vow to continue the struggle for a free, democratic Scottish republic for as long as it may take.
The fight is for freedom.

GOD SAVE THE QUEEN LYRICS

God save the queen her fascist regime
it made you a moron a potential H-bomb!

God save the queen we mean it man (god save window leen)
we love our queen god saves (god save... human beings)