Today, over twenty activists from Trident Ploughshares and Theatre of War locked themselves inside a 45 foot long replica of a Trident sub and blocked the gates of downing street for over five hours. 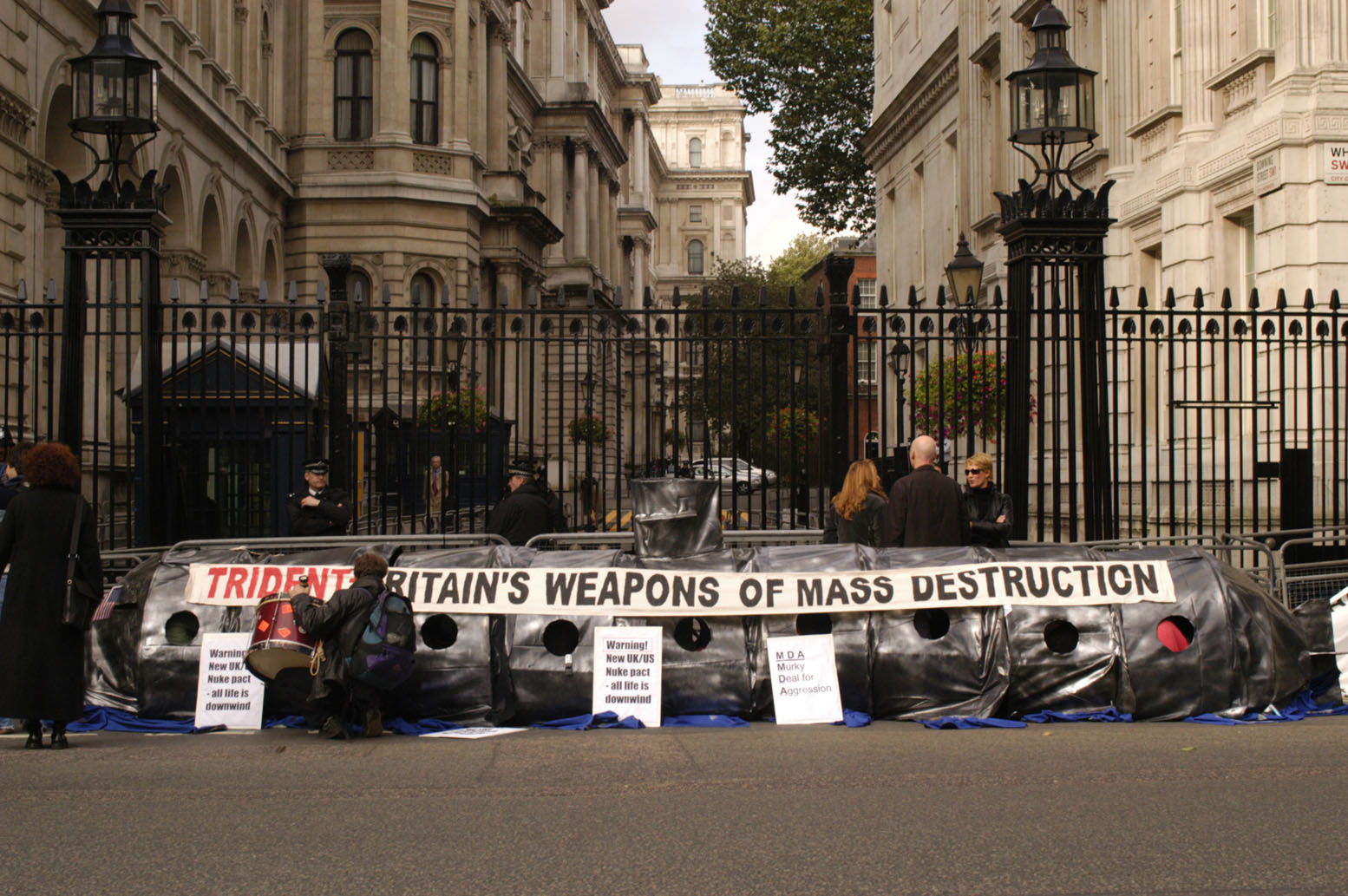 Today, Monday 11 October, peace activists from all over Britain have brought a huge model Trident submarine to the seat of British governance to challenge Labour to abandon its WMD and to comply fully with its international treaty obligations.

At this moment, around 30 activists from Trident Ploughshares and Theatre of War remain locked into their 45 foot model Trident sub, pleading with the police to uphold international law and immediately disarm the submarine, in compliance with the Non-Proliferation Treaty (NPT).

During the first minutes of the blockade, at the gates of Downing Street, Trident Ploughshares supporters including Parliamentarians handed in a letter to the Prime Minister, Tony Blair, calling on him to ensure that Britain will refuse to renew the 1958 nuclear cooperation pact (Mutual Defence Agreement (‘MDA’)) with the United States, and will comply fully with the Nuclear Non-Proliferation Treaty (‘NPT’), which requires Britain to take steps to engage in nuclear disarmament. (By contrast, renewing the MDA would see Britain continuing to work together with the world’s biggest nuclear nation, the U.S.A., which shows no sign at all of fomenting or participating in disarmament.) The letter urges the Prime Minister to uphold international law, reject the pact’s renewal and get rid of the Trident nuclear weapons system. This call follows publication of an authoritative legal opinion from Matrix Chambers, which concludes that Britain will be in breach of the NPT if it continues with the MDA with the US, which both parties are set to renew this year.


Trident Ploughshares spokesperson Angie Zelter, who is at the scene on the outside of the sub, said, “When two treaties are incompatible, one has to give way! Britain cannot claim the moral high ground on proliferation while it plans to extend its own arsenal. The nuclear collaboration with the United States has to stop and both countries must face up to their obligations under the NPT.”


Press spokesperson Rupert Read, speaking from outside Downing Street, added, “The intention of today’s event is to make it politically impossible for the government to stay in the nuclear-WMD business without at least a serious public and Parliamentary discussion of whether we in Britain ought to violate the NPT and hold onto our illegal nuclear weapons, or not. While Iraq has now been conclusively shown not to have had any WMDs, Britain has them aplenty, and -- in flagrant disregard of international law and treaty obligations, like an outlaw state -- is doing nothing to rid itself of them. On the contrary, it is co-operating with the reactionary Bush regime to expand its WMD capacity. This intolerable situation is being graphically highlighted, right now, by a large group of brave peaceful protesters prepared to put their bodies on the line, on Whitehall.”

International experts on WMD including senior adviser to Hans Blix and Director of the Acronym Institute, Rebecca Johnson was at the event. MPs from the Green Party, SNP and Plaid Cymru all issued press releases in support of the action.