Afternoon along with protests in Calais and Dover 200-300 people walked through passport controls at the Eurostar terminal at Waterloo. [ Reports 1 | 2 | Pictures 1 | 2 | Text of Leaflet ]

By lunch time when all the computers had finally arrived, the space at the Camden Centre, has started to fill up.

Morning there were sessions on Communication Rights, focusing on experiences from across Europe, including grassroots broadcasting.

The afternoon included a presentation about the campaign against ID cards and freedom of movement & communication.

Morning There have been reports of problems registering at Conway Hall, with the police being called by the management [report | video]

There was also a Women's day organised by Global Women's Strike. Read more here and here. 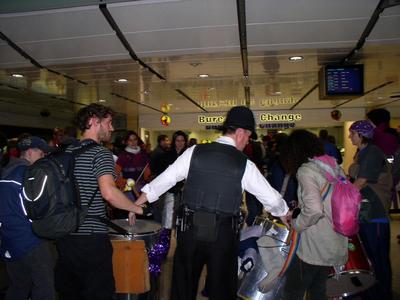