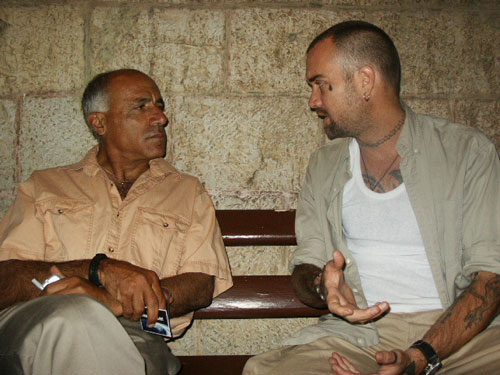 As the atrocities in Palestine (Iraq & beyond) continue to mount, with our (western) taxes providing the vast majority of funding no less, I am as always deeply saddened and angry at what we in the west can do, and what we are doing. The potential and the reality are shameful and those who continue to be maimed and murdered by our nations are only reflections of our lack of will, not our lack of ability.

I maintain wholeheartedly that Human Shields were the best chance Iraqi’s had to avoid the seemingly inevitable mass murder and occupation. But instead we employed our tried and tested dissention through protest. Protest organisers managed the largest protest in the history of Britain (perhaps 2 million) and the single largest day of protest the world has ever seen (Feb. 15, 2003 – perhaps 15 million). We hailed our “protest successes”… and than the invasion went ahead with hardly a glitch.

And yet we continue to employ (largely exclusively) the protest strategy as if somehow the results will be different each new time we use it. Who are we kidding?

This is a fact; roughly 100 Human Shields, strategically placed at six sites around Baghdad during the “Shock & Awe” bombing campaign, did indeed save untold lives. Dozens or maybe even hundreds were spared just by Human Shield presence. Not one site where Human Shields were deployed was bombed, despite similar sites throughout Iraq being destroyed (as they were in the first Gulf War in 1991). That is the power just a few of us hold.

What if a few thousand Human Shields out of a total population of 879 million in the west would have shown up pre-invasion? Would that have achieved more than 15 million people protesting around the world? You bet it would. We would most definitely have saved thousands of lives. And even if we still failed to stop the invasion we would have than become critical material witnesses who would have verified the crimes against humanity, mass murder and state sponsored terrorism that our nations are directly responsible for or complicit with. We would have exposed the murderous truth by transcending the “Prostitutes of Propaganda” in the corporate media; we would have compiled the physical evidence to send Blair and Bush straight to the International Criminal Court.

Do not tell me our presence in the thousands would not have changed everything… drastically, it surely would have. Do not tell me there is not tens of thousands of compassionate, conscientious and wonderful people who are ready to act in unison in order to save our planet from our currently insane path; there are tens of millions of such people at the least. And the moment we get really serious we will understand that mobilising in the lands of our victims is the most powerful act of all. This is what I intend to prove.

Protests should be the very least we do, rather than the excuse we use to say “I did my part, I went to the protests.” Bollucks to that; our protests do not mean a damn thing to those who are maimed and murdered daily.

When will several thousand of us stand up, in unison, intelligently, to let the tyrants and their puppets know the way this world will be run from that day forward? When will we, those of conscience, those who see the pending disaster ahead, take the stand that must be taken in order to turn this world around for the better? I say we do so as soon as is possible… and not a moment later. I say we do it now.

http://www.P10K.net) is the very best plan put on the table for achieving the above goal. It is a simple plan and one that is far more realistic than the cynics and tyrants would have us believe. It has the support of virtually all Palestinian’s and peace loving Israeli’s including Mordechai Vanunu. Noam Chomsky supports it, as does every other peace loving person who has taken a genuine look at the plan. I am in regular contact with my brothers and sisters in Palestine and they continually express their deep desire to support P10K in every way they can. But alas I have not been successful in the most critical initial element of P10K, the ‘Agreement in Principle’ for a cessation of offensive operations in Israel on behalf of the resisting factions in Palestine (Islamic Jihad, Hamas, Al Aqsa Martyrs Brigade). That would have insured the rapid growth of the P10K FORCE.

"The Palestinian Department of Foreign Relations and the Palestinian Legislative Council are ready to support you (P10K) in everything you need. I have links with Israeli's and we can invite them to participate. If this campaign succeeds, it will finish Palestinian suffering on the ground." - Abbas Zaki, General Delegate Foreign Relations & Central Committee of Fatah

Despite my best efforts however, I could not (through phone and fax communiqués) get Hamas and Islamic Jihad to agree to this ceasefire in return for 10,000 western/world citizens (P10K FORCE) arriving in Palestine. Only Al Aqsa Martyrs had agreed; no small task either I might add. But this was not enough and that is why I attempted “illegal entry” into Gaza in June 2004; I was going there to meet with the so-called “terrorists”, in order to secure this agreement. But I was subsequently apprehended by the Israeli Defence Forces in the security zone between Israeli and Palestinian Gaza. It is distinctly possible that if I had made it into Palestinian Gaza that I might just have succeeded in securing this agreement; instead I was jailed and deported by the Israeli Government. This has made promoting P10K much more difficult, and therefore the work will take longer.

So for those of you who are not clear about P10K or the P10K FORCE; the P10K FORCE will be comprised of no less than 10,000 people who will serve two major objectives when they arrive (in unison) to the occupied territories of Palestine;
1. The catalyst for the resisting factions in Palestine to cease offensive operations in Israel while we (P10K FORCE) live in and among the Palestinian population. This objective negates any bogus argument that Israel would make to say we are a “Security Risk.”
2. To act as International Observers who will document any and all Human Rights violations and violations of International Law in the interest of compelling the application of International Law; International Law that makes clear the illegality of the Israeli Apartheid Wall, the settlements, the theft of further Palestinian land and the occupation as a whole.

"If the Palestinian resistance feels they are alone, they will use weapons, but if the world community comes, then we will use other methods, to peacefully take our freedom." - Awni Mashni, Fatah

It is just that simple and this plan will only happen when 10,000 people minimum are registered and ready to deploy. If Israel attempts to stop all 10,000 of us; than it is time to do what Gandhi would do.

"More and more Israelis, who have not lost their conscience, have joined in (non-violent struggle). A huge presence of internationals from all over the world would constitute an enormous push to this struggle, and will give us all a renewed sense of hope. " - Tanya Reinhart speaking, Professor of Linguistics at Tel Aviv University

Let us acknowledge a painful fact, the Palestinian’s continue to be the victims of not just Israeli brutality, but western lack of will. If democracy exists at all than we have the power to compel balanced treatment for Israel as has occurred for Iraq and other Arab nations. Israel has flouted United Nations resolutions for over three decades while actively developing illegal nuclear, biological and chemical weapons capabilities. All the while our western “democracies” do little more than express pathetically insincere words of disapproval backed with no action of any consequence. That’s not democracy, so let us effect democracy on our own terms.

I say again that P10K has more chance of major results than any other citizen-based initiative that I am aware of.

"This (P10K) is a very imaginative, creative, and courageous initiative. If it receives the support it merits it could have a major impact on moves towards reconciliation, peace, and hopes for justice and freedom in this tortured corner of the world." – Noam Chomsky

P10K will change the world; 10,000 people who will become the conscience of humanity; replacing the collective conscience that has slumbered in a coma for far too long.

I do not know how long it will take to prove the power of P10K, to acquire the 10,000 registrants, but I will do my best. The main thing I put to every person who reads this now is; would you or would you not want to be 1 of 10,000 who will travel to Palestine for the objectives stated above? If yes than why have you not yet registered to be part of the P10K FORCE? Because the bottom line is that the P10K FORCE will only happen when the 10,000 people are registered and ready to go.

Whether it takes six months, one year or longer I will continue to present P10K until the 10,000 are registered. That is my priority in life and despite my limitations as one person I am not alone, I have incredible support and a growing team and we are all committed to the P10K Mission. And the sooner those of conscience realise the power of the P10K plan the sooner we will together make history, save life and truly turn this world around for the better.

REGISTER for the P10K FORCE!

PS – A P10K Registration Tour of the United Kingdom, Ireland and Europe is being planned for early 2005, if you live in any of these areas and wish to host this presentation (which will feature Ken O’Keefe and guest speakers from Israel and Palestine) than email P10K organisers at