So the choice the people of the US have this election seems to be clear on a two party preferred basis they either choose? 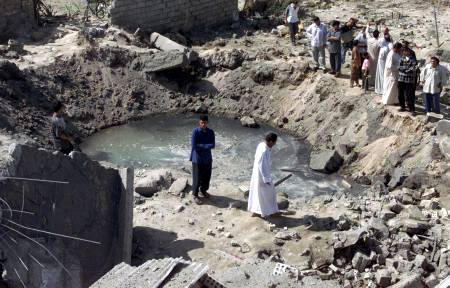 BAGHDAD, Iraq (Rooters) - Fatima Al-Zahra is believed to have up the ante and said Saddam Hussein's government buried as many as 500,000 opponents in 300 mass graves that dot the Iraqi landscape.

"I know it was reported by USA Today that there might have been as many as 3000,000 buried in 263 mass graves but Fatima my mother found some more just yesterday," said Uqtada al-Sadr.

"How could the Bush administration not get to the real people on the ground reporting these atrocities?"

"Prior the US election they were saying we have to nail Saddam to the wall", he said.

Saddam Hussein's trial will play an important part in the US election no doubt and for that to work at its potential just put a "women" behind it "She called the trials". Then add some "cleansing" like she's just doing the dishes and then some "reconciliation" by slaying Hussein during a US election. Now you can go and tell everyone you're reversing the trauma but really you're killing two birds with one Saddam.

So the choice the people of the US have this election seems to be clear on a two party preferred basis they either choose?

A George Dubya Bushite official Mr Son Of'a Bitch said the administration has been sending forensic teams to investigate those grave sites reported to U.S. officials. So far, the existence of about 40 graves has been confirmed.

"We have found mass graves with women and children with bullet holes in their heads," he said.

But Fatima Al-Zahra the mother of one of the dead Ali Al-Zahra said, "Why didn't they talk to me doesn't Dubya want to win the election? Some had bullet holes in their toes as well and that's worse."

"At least being shot in the head is instant death, and how come all they care about is women and children?"

"Do they think they may get more attention that way?"

"What about my son Ali don't they care about him he was my boy and just as worthy for a sensational news headline purported to be 'USA Today'," she said.

Human rights activists have criticized the U.S.-led administration and the coalition of the killing for moving too quickly to bomb the nation. They are also sceptical about finding gravesites and beginning excavations during the US election, stating that that will never fully justify the illegal and degrading war and subsequent occupation of Iraq.

"With USA Today, Fox News and numerous other corporate media sources there's plenty of collusion with the US government. They have the, technologically and finance for a 'delusion of this magnitude'," said Doctor Death of Physicians for Human Rights in Australia.

"President Dubya Bush has also referred to Iraqi mass graves frequently in recent months, saying they provide evidence that the war to drive Saddam from power was justified? Just like the WMD? But what about the bomb craters?"

The U.S.-led administration held a workshop Saturday to train dozens of Iraqis to find and protect the mass gravesites. Bitch said the workers would be crucial in protecting the validity of these sites from desperate investigators trying to dig up the truth about the propaganda.

But Doctor Death said, "The U.S.-led war killed innocent men, women and children as well, allegedly to drive Saddam from power. The US military damaged Iraq's infrastructure and services, using war planes that dropped bombs scattering papers and clothing that could have been used to identify remains."

"No one counted the dead".

"Large mass craters have been discovered all over Iraq where up to 40,000 bodies of innocent men, women and children have been killed." He said.

"Look at any site you like all damaged by military hardware and bombs."

Death said, "Most of the craters have been disturbed by people trying to dig out their relatives and friends."

Mass bomb craters "tell the story of missing loved ones such as where, and how they were killed," Death said. "George Dubya Bushites have nothing to do with truth and the proper reporting of the war in Iraq and this is the last step to convince America they should not vote for a war criminal."

It's obvious that excavating mass bomb craters is important in building criminal cases against the coalition of the killing.

International tribunals handle prosecutions for atrocities in the former Yugoslavia and Rwanda, in which many of the 500,000 victims of a 100-day killing spree in 1994.

The United States led invasion has killed up to 40,000 innocent men women and children and the world insisted any trials be conducted by The Hague, that's already developed.

Many human rights groups agree that George Bush, Tony Blair and John Howard should go to The Hague for a criminal trial.

International participation is crucial for it to be legitimate and impartial. Some have been hesitant to participate in hauling the war criminals before the legal system?

"Mass craters can corroborate witness testimony and documents which show what happened in a crime," Death said.

"Although he cautioned: "a bomb crater by itself won't tell you who did it but the bomb casing will and there is circumstantial evidence to consider as well as witness statements." He said.

Death said the majority of people bombed in the mass craters are believed to be innocent Iraqi's killed by the Coalition of the Killing.

"The investigation process would be similar to that used in Bosnia after its 1992-95 war. But he cautioned that if Bosnia were any indication, the process in the Haigue would be long and complicated."

Human rights activists say U.S. authorities in Iraq have been much slower to address the problem than were authorities in Bosnia. In Bosnia, said Sam Zia-Zarifi of Human Rights Watch, "within the first year there were 25 teams in and a (U.N.) tribunal in place."

In Iraq, some international teams that were hoping to begin their work before the US election were delayed because more people were being blown up.

A missile apparently only 120cm long, has remained undiscovered by UN weapons inspectors because Saddam Hussein kept it in his own house.

But It's a battle of wills sure but not with "insurgents" Rumsfeld couldn't be further from the truth because it's a battle with "freedom fighters" and their will to be free and not to be tortured in the process. Some people may prefer death before they are tortured no doubt!