Justice for the Canary Wharf cleaners!

Led by the Samba band, a group of protesters turned up at Canary Wharf today to shout their support for a fair wage for the workers in the Canary Wharf buildings. An injunction had been obtained in the days leading up to the protest by the owners of the Canary Wharf complex to prevent the protest taking place. This may have diminished the numbers in attendance but it did not make the issue, or the protest, go away... As a spokesman for the Transport and General Workers Union said before the protest: "Canary Wharf is home to some of the most successful and powerful banks in the world. But it is content to let its contract cleaners be paid poverty wages, no sick pay, 15 days holiday and no pension. This demonstration will allow workers to show their support for Wharf cleaners." 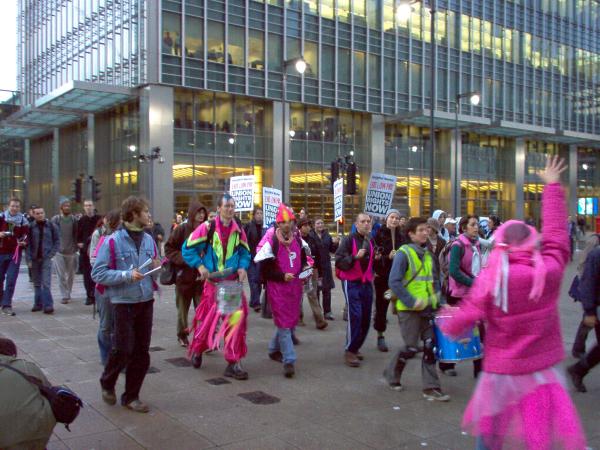 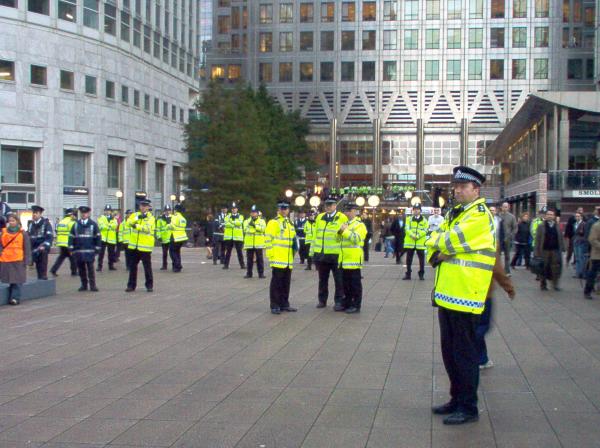 The police look on in trepidation

Back in May, the Transport and General Workers' Union, the cleaners' union, welcomed HSBC and contract cleaner OCS's decision to increase pay and conditions for its cleaners at Canary Wharf. However the T&G warned then that it would be continuing its campaign with The East London Community Organisation (TELCO) urging all companies at Canary Wharf to pay their cleaners a living wage and for union recognition - at present, some cleaners at Canary Wharf are paid as little as £5.20per hour. Today's protest was part of this ongoing campaign and part of the ESF fun as well..

Jack Dromey, T&G Deputy General Secretary said in May "This is a step in the right direction, but make no mistake, the benefits have come about because cleaners at Canary Wharf have begun to organise into an effective union." It is to be hoped that these efforts will be allowed to continue unmolested by the behemoth corporations which occupy the Canary Wharf complex. We should be ready to defend the cleaners' right to unionise at every turn...