In the wee hours of the morning activists from Brighton defaced the shop front of Marks and Spencers Brighton.

This was done in response to Marks and Spencers support of Apartheid, Racicm and Zionism and in solidarity with the suffering people of Gaza. 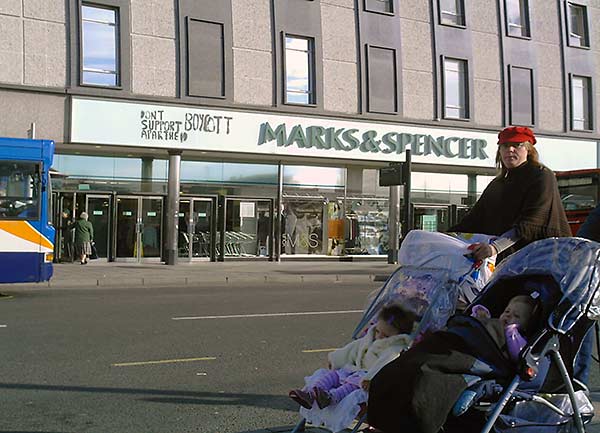 In the early hours of the morning concerned people from Brighton defaced the shop front of Marks and Spencers Brighton.

This was done in response to Marks and Spencers racism and support of Zionism (see below) and in solidarity with the suffering people of Gaza.

Activists climbed up onto a ladder and stenciled the message "Dont support Apartheid, Boycott Marks and Spencers"(using the M&S sign already there, see pics) in large black letters whilst several others stencilled in pretty pink various other messages in the two entrances leading to M&S.

M&S is a leading rogue superstore supporting genocide and ethnic cleansing by Israel in Palestine.

We in Brighton are stepping up the campaign against M&S and urge others to do likewise, now is esspecially a good time for this with M&S doing very badly financially, lets put the the boot in and shut the bastards down.

Marks and Spencers Support Israel with 230 million in trade each year and sells goods produced in the illegal Israeli settlements.

"Large sections of the arab section of Palestine should be transplanted to Iraq and other middle eastern states", another quote from lord Israel Sieff chairman of Marks and Spencers.

Want to get involved write to