Report of anti-war march and rally in London October 17th 2004. 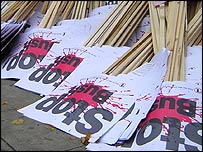