Sunday 17th October, the closing day of the European Social Forum. We marched from Russell Square to Trafalgar Square, listened to speeches and danced to the sambatistas. Here are some photos and a report. 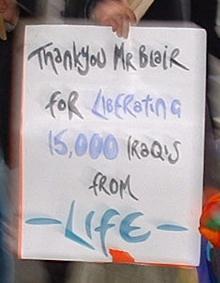 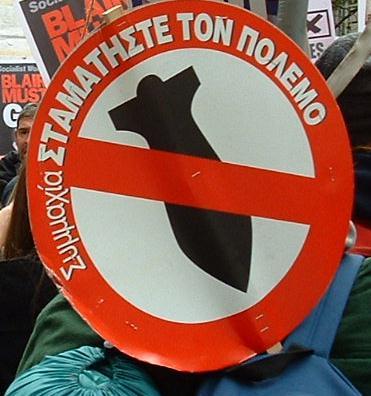 It's Greek to me, but the meaning is obvious 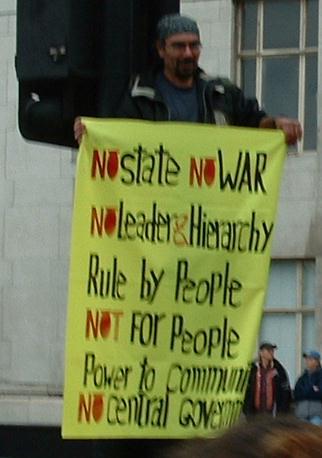 No state, No war, No leader & hierachy 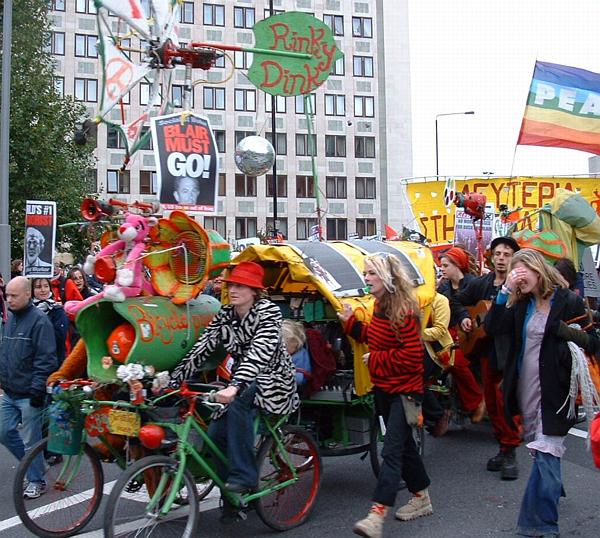 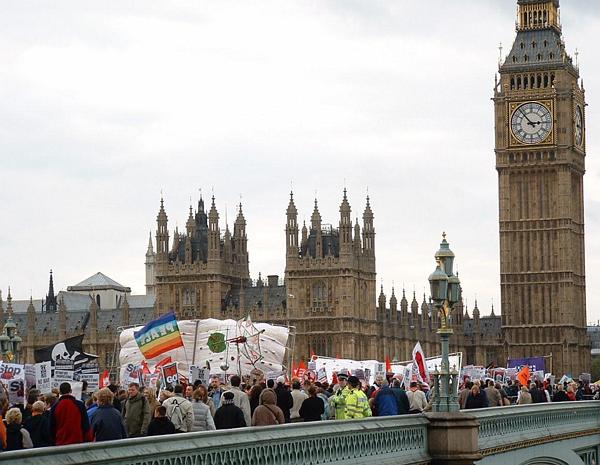 Marching on parliament (I wish!) 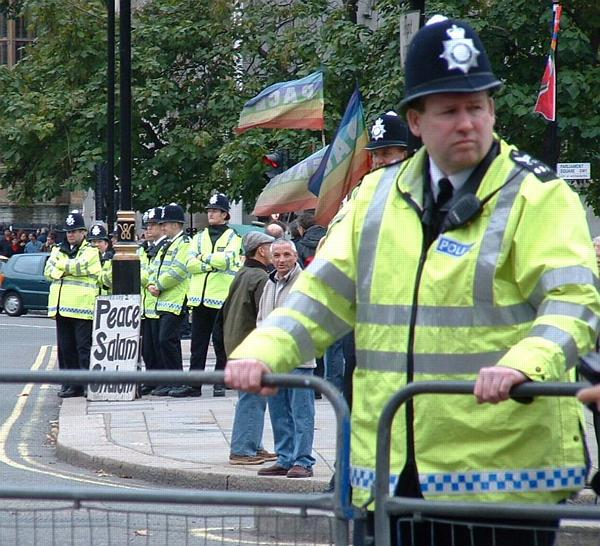 Brian Haw's peace camp is in there somewhere 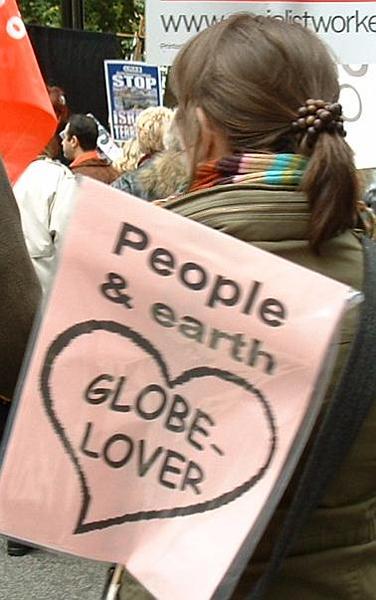 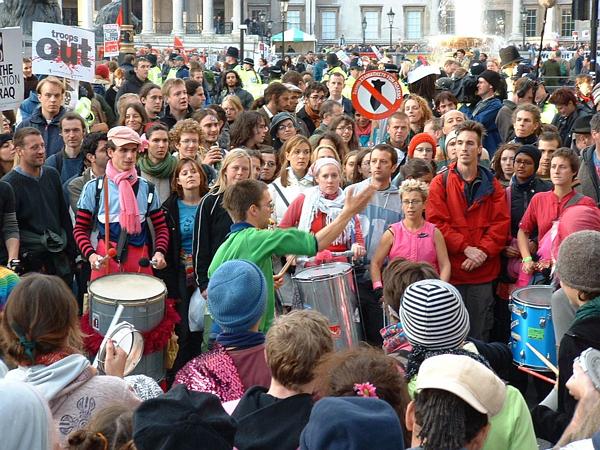 Sambatistas (a still photo just doesn't do them justice) 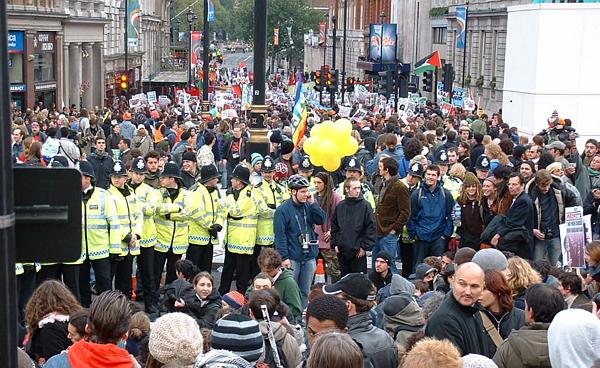 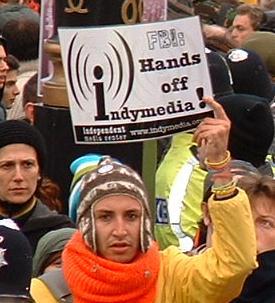 My mum says my first word will be "Sorry" 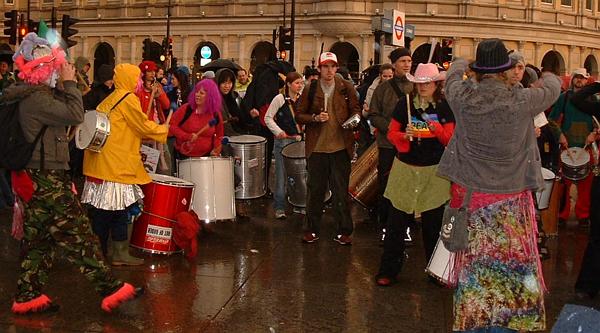 Even the rain can't stop a samba party

Just over 30 people joined the coach from Swindon to London, with quite a few regulars missing due to ill health or other commitments, but with quite a few new faces as well. Unfortunately, we had no Swindon Stop the War Coalition banner to rally around this time, due to an incident on Friday at a street performance in Swindon town centre. An unidentified man, possibly an ex-soldier, took offence to the presence of the banner at the war memorial, and proceeded to slash at it with a Stanley knife before running off. The performance artists were understandably too shaken to pursue the culprit, and the banner is currently with a student who offered to attempt to repair it.

We attempted to rally around the Swindon & District Green Party's flag, but as luck would have it, the flag disappeared into a green block from Belgium while I wasn't looking, so I spent most of the march surrounded by various political, campaign, trade union etc groups from all over Europe, carrying their banners and chanting and singing in English and other languages. The look and feel of the march was a bit different to other anti-war marches I've been to, probably due to the different mix of people who had come to join the ESF. There were fewer of the creative home-made placards and other props which I felt was a shame, but the energy of the chanting and singing and the level of participation was much higher than I normally experience.

was one chant which was particularly infectious, and had everyone jumping up and down. Another popular one was

but there was plenty more being sung, too much to repeat here.

The route was a bit unusual, going round in a big loop and crossing the Thames twice. I noticed that it seemed somewhat lacking in suitable street furniture to climb on for optimum photo opportunities compared to other London marches - certainly a hindrance to independent photojournalists, I wonder whether that was deliberate? We marched past the Houses of Parliament, where the barriers and police had been carefully placed to keep us away from Parliament or Parliament Square, including Brian Haw's peace camp.

Wandering round Trafalgar Square, I found that the lower section of the square in front of the stage was packed, and all the viewing space at the edge of the top section of the square was full of people, but there weren't many more people behind them in the top of the square. Moving back round behind the stage, I saw (or rather heard) that a samba band had arrived, and they were drumming up a storm at the top of Whitehall, surrounded by people dancing or bobbing about. Spent some time dancing with the sambatistas, and seeing that at any given time most of Whitehall was pretty empty, but there was always a fairly large group somewhere along it, walking up to Trafalgar Square. This was really confusing because I was trying to work out whether everyone on the march had arrived yet. My final conclusion was that people were still arriving at about 5:30 when I left, albeit in widely-spaced groups.

A ring of maybe 15 yellow-coated police in the middle of a crowd caught my eye - they looked like they were surrounding someone or something, but all facing outwards. My curiosity got the better of me, and on closer inspection they turned out not to be surrounding anyone or anything, and they weren't even in a complete ring, just standing there in a few discontinuous lines in the middle of the crowd. Some kind of decoy? I asked another onlooker what was going on, and he told me that apparently there had been some kind of confrontation. He thought he'd seen someone being dragged somewhere by police but hadn't seen it clearly enough, and had no idea what had happened to said person.

A few minutes later, the police had formed another line along the edge of what looked like a sit-down protest, although exactly who or what the police were protecting from who or what by doing this, was not clear. One of the sit-down protestors with a megaphone was urging people to sit down, saying that this was a peaceful protest and that they wanted their colleague freed. Maybe they were calling for a recent arrestee to be released? Unfortunately I am still none the wiser about this, because the line of police then all moved off in the direction of the tube station and most of the sit-down protestors stood up and followed them. Can anyone fill in the gap here please? Is this related to any of the arrests reported elsewhere on the newswire?

With darkness falling, a second samba band had arrived in Trafalgar Square and started up their own party (the first band were presumably taking a well-earned rest and had dispersed to mingle with the rest of the demo by this point). At about the same time, the heavens opened, but this did not deter the sambatistas nor the dancers they had attracted. If anything, the harder it rained, the more energy the music and the dancers had.

During the course of the day, three different people had approached me and asked whether I was involved with Indymedia (probably something to do with indymedia.org.uk being one of the web sites I'd chosen to promote on my placard). How do you answer a question like that? Well, no I'm not an IMC volunteer, the sort who maintains the site, writes features, moderates the newswire etc, but I take photos of things happening and post them to Indymedia. It's a difficult concept to explain to people who are still used to closed corporate media.

But hey, don't take my word for it that this is what happened, and besides, I couldn't possibly see and report on the whole of the march, so check out the feature page at

A glossy leaflet in English and a Scandinavian-looking language (Danish maybe) made by "Stop the Trade Robbery", the Danish Association for International Co-operation and the sculptor Jens Galschiot. The leaflet also shows pictures of some of Jens' work, most notably a statue of a very fat person sitting on the shoulders of a starving person whilst holding a set of scales of the sort used to represent justice.

More information about the network for fair trade:

Make sure whoever wins gets the message straight away!
Rally for the planet at the US election
2 days after the election, Thursday November 4th
Assemble 6pm Lincoln's Inn Fields (Holborn Tube) for march to US Embassy

A better form of democracy is possible!

Copyleft statement: As with all contributions to Indymedia (unless stated otherwise), this report and the photos are copyleft - feel free to reproduce, reuse, redistribute, create derivative works etc, for your web sites, leaflets or whatever. Copyright sucks!