Fairford Coaches at Court of Appeal - Photos of 14 October 2004

See below several photos of the support demo outside the courts on the first day of the Fairford Coaches hearing at the Court of Appeal. If the police were willing to post the photos on Indymedia which THEY took at the demo, there would be plenty of sharp close up photos of all of our faces. Since there is no such arrangement, enjoy these photos! For photos of the second day of the hearing see- 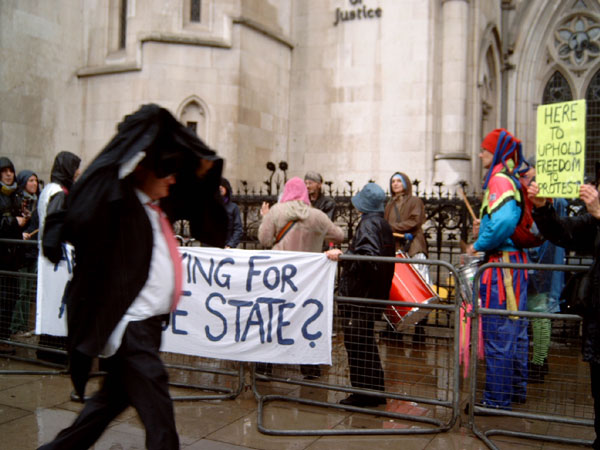 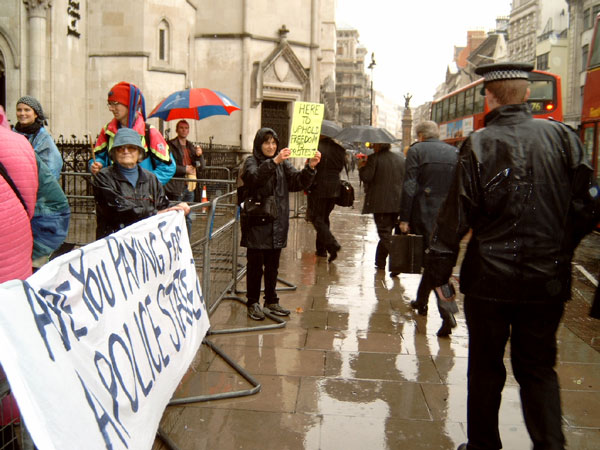 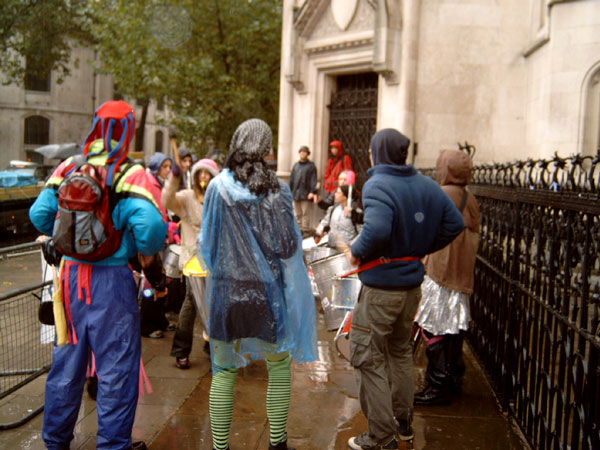 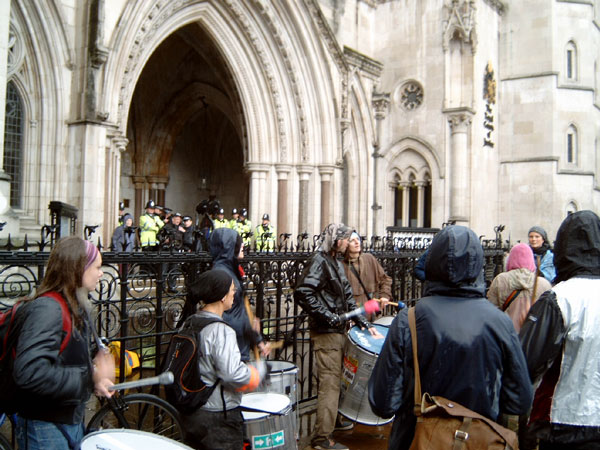 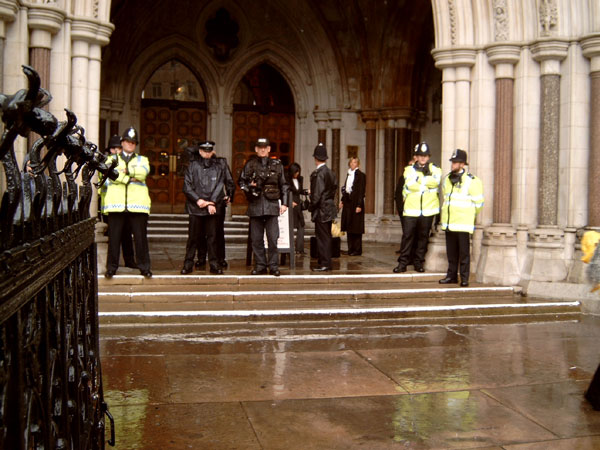 The hearing went well, and the support demo outside the Royal Courts of Justice was a real highlight. The samba band who performed beautiful rhythms were a delight to watch in their bright clothes on such a rainy day. The music was crucial to helping us endure the terrible weather while we passed out the new leaflet. The leaflet was laid out and printed on tree free paper (100% hemp) by Bath's remarkable Hedonist press (

http://www.hedonistpress.com). A pdf of it is at-

Other than Indymedia, BBC and a handful of local press, there was fairly little press coverage of the occasion on either day. That's not a big surprise, they didn't get very interested in the Judicial Review until we had a ruling. Press coverage so far is at-

The police were intrusive at the demo. They seemed intent on gathering a complete photo record of the demo participants. They should have been facilitating our democratic right to demonstrate... but after they finished getting all our photos up close like they were paparazzi, they retreated from the rain to the archway at the main doors to the Royal Courts of Justice.

The hearing went well, and our case was very strongly argued by barrister Michael Fordham of Blackstone Chambers. Although you can never be sure how the ruling will go, a laypersons view would be that we definitely won the arguments. Crucially, and quite oddly, the barrister for Gloucestershire eventually argued a case that rested totally on the premise that the police came to the conclusion that all the coach passengers were WOMBLES. While this is an exciting suggestion, the police's own evidence from the day says that they -didn't- think all 120 passengers were WOMBLES.

Although the Wombles argument may lose the police the case, it appears that they adopted such extreme and unwieldy measures as a response to the strong arguments put forward by our barrister. Quite amusingly, our barrister was often able to substantiate his points using the police's OWN EVIDENCE! A judgement is expected in November or early December. There will be notices put up of the date approximately 3 days before-hand. Check Indymedia for further info.

For high quality photos of the demo visit-

Further photos from the Fairford Coaches are at-