A group of activists disrupted a session of the 4th "uninhabited combat air vehicles" (UCAVs)Conference, being held at the Cafe Royal, Piccadily today and tomorrow. There was one arrest, of a man who was punched by security. Activists will be assembling outside the Cafe Royal from 5pm to say goodnight to the dealers in death as they leave after their "networking drinks reception" 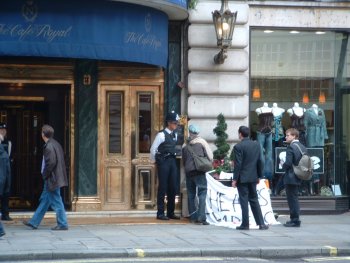 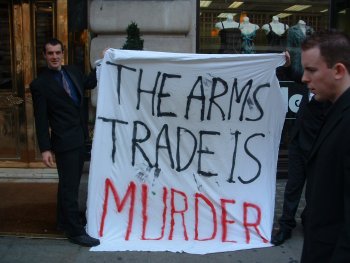 A message to the delegates

The conference is being held as news of the death of at least one Palestinian policeman, killed by a missile from a UCAV/drone, is filtering through on the newswires. A drone was also responsible for the picture of a stretcher that the Israelis claimed was a rocket - which raises concerns about the accuracy of their cameras. Information from the cameras is sent to a control room in Tel Aviv, where it is assessed and acted upon - innocent people are all too often caught up in the atacks that are launched remotely.

Details of the programme are on the conferences website

From 5pm people will be gathering outside the Cafe Royal, to say goodnight to the delegates as they wander off after their drinks reception, and ponder their last session, which includes a discussion on

"The Importance of UCAVs within a future Network Centric Warfare Paradigm"

Which means "killing people without leaving the safety of your office"