ESF: A Tale of Two Plenary Disruptions - What's Going On with the SWP? 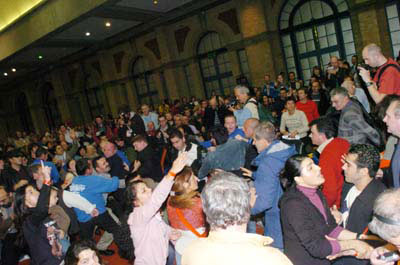 So this is ok? 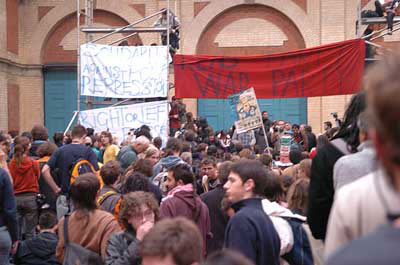 but this is an outrage?


On the Friday of the ESF 20 or so demonstrators stormed into the main plenary session and started a full scale punch up with the security and some of those in attendance.

Their problem it seems was that one of the speakers was from the Iraqi Communist Party who have constantly hedged their bets with both the puppet Alawi government and the Coalition Provisional Authority that preceded it. The session ended with Stop the War guru Lindsay German being booed and whistled off stage after trying to placate those demonstrating by agreeing with them.

Of course its just coincidence that the meeting was packed with SWP members who egged on the disrupters. It's also just coincidence that there was around 15 SWP core members (hacks) who were on hand to stop any trade unionists from confronting the disrupters by getting in their way and giving them a well rehearsed argument in favour of those demonstrating. Equally it’s just by chance that the offending Iraqi commies have recently been attacked in Socialist Worker and blamed for the failure of a Troops Out vote at the Labour Party conference. Finally it's just convenient that the disruption gave the opportunity for a long article slagging of the previously mentioned Iraqi reds in the next day's Socialist Worker. There was little or no condemnation of the violence or the perpetrators.

On the Saturday of the ESF around 200 demonstrators entered the main plenary to confront Labour Mayor Ken Livingston about the harassment they were getting from HIS Police who he is constantly moaning that he doesn’t have enough of. Ken was not there. Instead they were confronted by SWP robot Weyman Bennett who started a scuffle with them when a speech was made by volunteer from babels. That must have been embarrassing eh Weyman? Let’s get one think straight: The only attack from the anarchists was the overturning of the table (this is probably when the phone went missing, if it did at all). Weyman on the other hand was well up for a fight but did not get one because of the discipline of the demonstrators. HE DID NOT GET PUNCHED AS HE CLAIMS. So why is Weyman lying? Anyone involved in the campaign against the CJB and remembers Weyman in his previous incarnation can answer this question. Put simply, Weyman is a hack who would claim that his attackers wore white bed sheets and pointy hoods if the SWP central committee told him to.

The last time the SWP saw it's membership peak was in 1995/6. Since then, despite changing their core beliefs quicker that most people change their clothes they have been in total decline. They have recently had to sell off their printing press and are now forging alliances with people who believe that gays should be executed and women have no rights at all. Yet they are still willing to play the 'victim of racists' card when it suits them.

They may still be Britain's biggest Trot group but that's only by default. There has never been a better time to sling these hypocrites into the political dustbin and start a real revolutionary movement.