Britain continues to hold 14 foreign nationals who have never been charged with any offence. The supposed evidence against them remains secret. They were never questioned by the police. They have not been put on trial.

These men are detained under the Anti-Terrorism, Crime and Security Act 2001, which allows the Home Secretary to detain indefinitely any foreign nationals if he has 'reasonable suspicion' that they have links with 'international terrorism'. At hearings last year, the government acknowledged that some of the 'evidence' could have been obtained by torturing detainees elsewhere, e.g. Guantanamo and Abu Ghraib.

On Sunday 3 October, around 100 people gathered outside Belmarsh Prison in south east London to protest against the indefinite internment of the 14 prisoners, and to demand the repeal of the UK's anti-terrorism laws. A wide range of people were present, from Muslim leaders to grass roots activists, incluiding Lawyers and anti-racism campaigners. A number of speeches were made, and an open microphone included poetry and music. Photos 1 | 2. 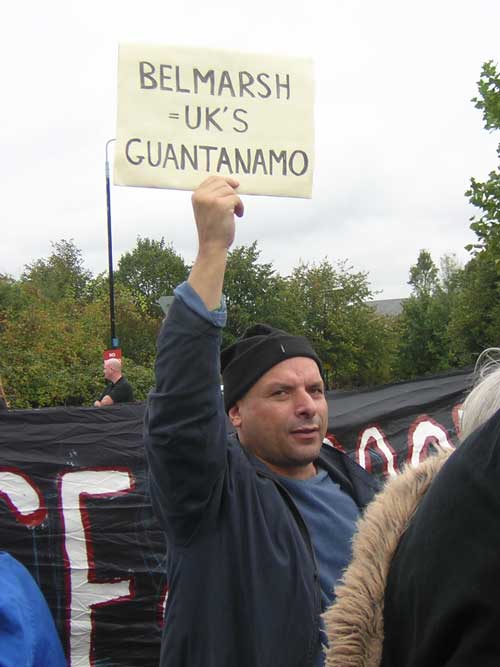 Partly on those grounds, the legal basis has been challenged by the detainees' lawyers. In August a 2-1 majority on the High Court ruled that evidence from torture could be admissible, even if UK agents were present, provided that they did not carry it out. Clearly this gives a green light to torture around the world. The High Court judgement will be reviewed by the Law Lords, starting on 4 October. Hence our protest on the day before.

Most of the internees are being held in high security at HMP Belmarsh, in cells described as 'concrete coffins' and in conditions which are tantamount to torture. It is cruel and inhuman treatment to keep people locked up in isolation, without any prospect of release or trial, and without telling them why they are detained or when they might be released. The psychological pressure they are suffering is immense (one detainee is now in Broadmoor).