Aldermaston 'Spook the Base' weekend - report 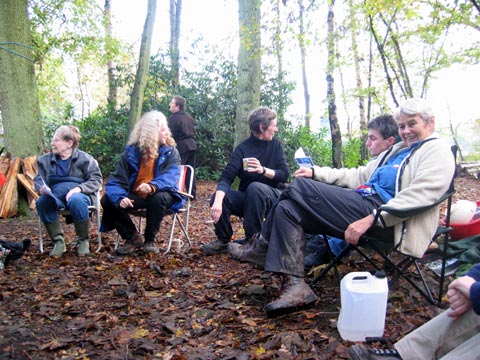 Spooking the Base at Aldermaston

Last weekend a training camp was held in the beautiful Bluebell Wood running along the perimeter of the AWE Aldermaston base. It was organised by Block the Builders, a new campaign group which aims to prevent, by non-violent means, the building of a new laser facility (“Orion”) that would enable the base to develop the next generation of nuclear weapons.
Around 25 people turned up for the 2-day event, bringing thick woollens, camping gear in some cases, and the more sensible ones came equipped with stout welllies. Awnings were put up, a very welcome fire was lit, the kettle was put on and people got down to the important business of getting to know each other. Things later got a bit more earnest, with practical workshops that looked at consensual decision making and how affinity groups function. One of the activists gave us a short tour of the base – but only on the outside on this occasion, unfortunately. Later on we were promised a film show – provided we didn’t mind huddling over a laptop in the back of a car, in groups of five! At one stage the MOD arrived and wanted to take our names, but for some reason many of us were suddenly afflicted by a bout of amnesia so the officers were reduced to writing detailed descriptions of each of us.
As twilight fell your correspondent was obliged to return to Oxford, leaving her companions to plot more exciting things for the night ahead. Goodness knows what happened next…..
More seriously, Block the Builders has now started collecting pledges of support for its campaign. You can find all the background info on AWE Aldermaston, the new construction proposal, legal advice and the pledge form at

http://www.blockthebuilders.org.uk . You can also find some relevant information at