Last night was the Cambridge leg of the Stop Aids speaker tour where three inspirational speakers from Zambia, Uganda and South Africa talked about their experiences with HIV/AIDS. All of them had lost people to the disease. 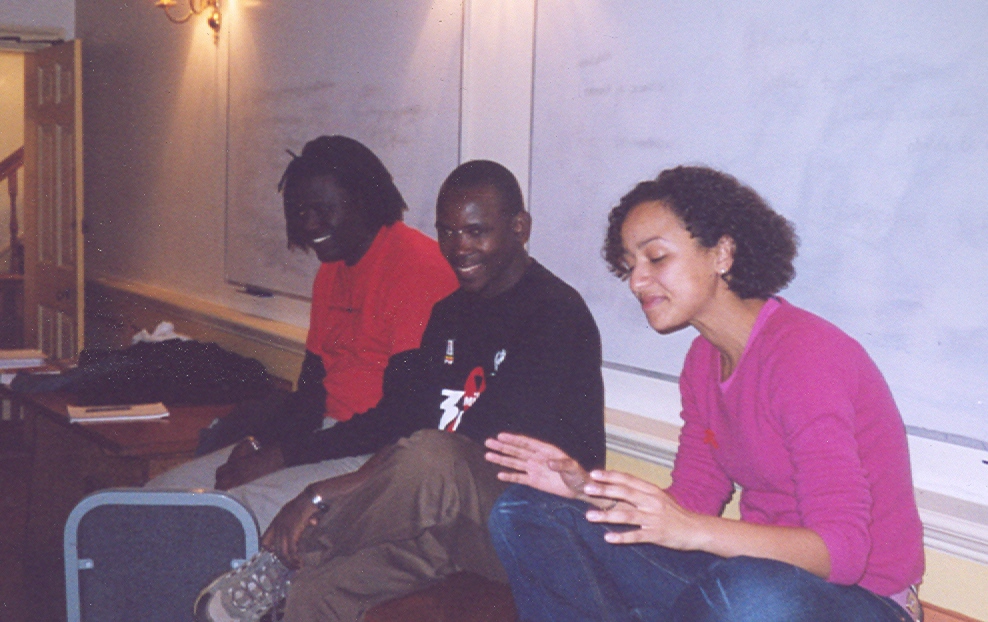 I heard a chilling story last night about a beautiful eighteen year old African girl. She lived as part of a big family in a poor village. After losing her father to AIDS her mother told her that she had to go and look for a job to help support her elderly family and younger brothers and sisters. She went to stay with a friend in the nearest town who supported her for a while as she tried to find work but, after no success, her friend told her that she must ‘use what she had to get money’. She couldn’t go back to her family without some money to support them so she was forced into taking on sex work in the town. Inevitably she soon fell ill with HIV virus. She went home to her family. Back in the village she was stigmatised and made to live alone until she died of AIDS. This story could have been worse. If she had become infected without realising and then had returned to the village and continued her life there she would have brought HIV with her and the infection would have spread. Horrendously this was a true account, told by someone who knew her well and who tried to save her life. Horrendously this kind of story repeats itself daily all over developing countries, with someone becoming infected with the HIV virus every fifteen seconds.

Last night was the Cambridge leg of the Stop Aids speaker tour where three inspirational speakers from Zambia, Uganda and South Africa talked about their experiences with HIV/AIDS. All of them had lost people to the disease. Manford, who finished with the story above, lost two of his closest childhood friends, Mandisa lost her cousin and Henry, in an incredibly moving account, told us how he had lost his father and his brother before finding out that both he and his girlfriend were HIV positive. In his own words; ‘The whole world I saw was coming to an end’.

The aims of the tour were to promote solidarity between youth worldwide but also to raise basic awareness of the problem. Speaking to one of my friends afterwards he told me that he’d always seen it as ‘a disease that’s always been there and we need to stop at some point’. Unfortunately this seems to be what most people think. It couldn’t be further from the truth. HIV/AIDS is nothing more than a national emergency in Africa now. In the 1990’s infection rates were about 1%, ten years later they are at 20% and rising. Now there are 15 million orphaned and 20 million dead, if we don’t do something soon there will be over 45 million infected by the end of this decade. That’s much much bigger than 9/11 or Iraq. The situation is spiralling out of control, destroying the working population and leaving nations of orphans and elderly struggling to survive, with children as young as twelve often left with no option but to drop out of school to take on sex work or look after their brothers and sisters. Teachers, doctors and nurses are dying leaving health services crippled under the weight of the epidemic and education foundering at a time when it is needed most. Years of social and economic development are being undermined and destroyed, productivity is shrinking and global equality becoming more entrenched. As Henry succinctly put it ‘AIDS is with us’ and he was right, this isn’t an African issue, this is a global issue of equality of people worldwide and basic rights to medicine, health care and some quality of life.

All of the speakers last night have now dedicated their lives to fighting the disease and the stigma and misunderstanding attached to it. Mandisa is a AIDS researcher in Durban, South Africa, Henry is a youth worker and activist in Uganda and Mannie works for the development charity SPW, changing behaviour and giving people basic information about how the disease spreads, demonstrating condoms and making them freely available in the villages, empowering women to say no to sex (something which they often don’t realise it is within their right to do) and working with school children to provide them with the knowledge and skills to take control of their own lives and make decisions to protect themselves. As well as greater access to cheap, life saving drugs there is a growing need for behaviour change and awareness. In Tanzania I would attend two or three funerals a week in a tiny village and at every one people would deny that AIDS had killed their mother, father, brother or child. The epidemic is perpetrated by myths such as the one that says sleeping with a virgin will cure you. Churches still preach anti contraception sermons, telling their congregations that the disease is found in condoms and the epidemic is a racist plot by white people to undermine Africa. The president of South Africa himself denied the link between the HIV virus (transmitted in bodily fluids) and the AIDS syndrome that develops from it.

‘The issue with HIV/Aids is that when it hits you, you want to start doing something’ said Henry. Many of us in the UK are lucky enough never to have been hit in the way these guys have been. I hope that the inspirational courage, strength and passion of these three young people hit some of those who attended last night. I also hope that reading this has made everyone else more aware of what’s going on. Now is the time for us to get involved. There are Stop Aids campaigns taking off in universities all over the country. These guys went to 16 universities in 2 weeks spreading the same message – we have to act now! Individuals can make a difference, Madisa told of how a small group in her university got a constitutional decision in the courts that access to treatment is a human right and made Mdege admit the connection between HIV and Aids. Britain is soon to take over the EU presidency and the G8 summit is being held in Scotland this summer. We have a real chance to affect the decisions being made by our leaders.

On a more local level World Aids Day is on Dec 1st. A couple of days earlier, on Nov 29th, the Cambridge Stop Aids Society is holding a fundraising event in the Kambar. There is African drumming, Lebanese rap, some hip hop and a number of student bands lined up to play. If we can fill the Kambar, its rent for us goes down and we raise more money for people like Henry’s dad and brother who died because the drugs to save them were too expensive. Whatever your response to this article, whatever you are doing the next day, however busy you are, come along to the Kambar, bring your friends and lend your support. This is too important to miss. Nelson Mandela said that future generations will judge us by the adequacy of our response to this tragedy; I hope they judge us well. AIDS is with us and we have to act now.