Hard-disks nailed to the italian consulate in Dijon (fr), in solidarity with IMC

In solidarity with Indymedia, a gathering/action was called in Dijon, France, in front of the italian consulate. Hard-disks were nailed to the front-door, a banner was deployed and flyers distributed, in order to put pressure upon italian authorities and inform the public about the Indymedia network and the ongoing repression against dissident media. Report below. 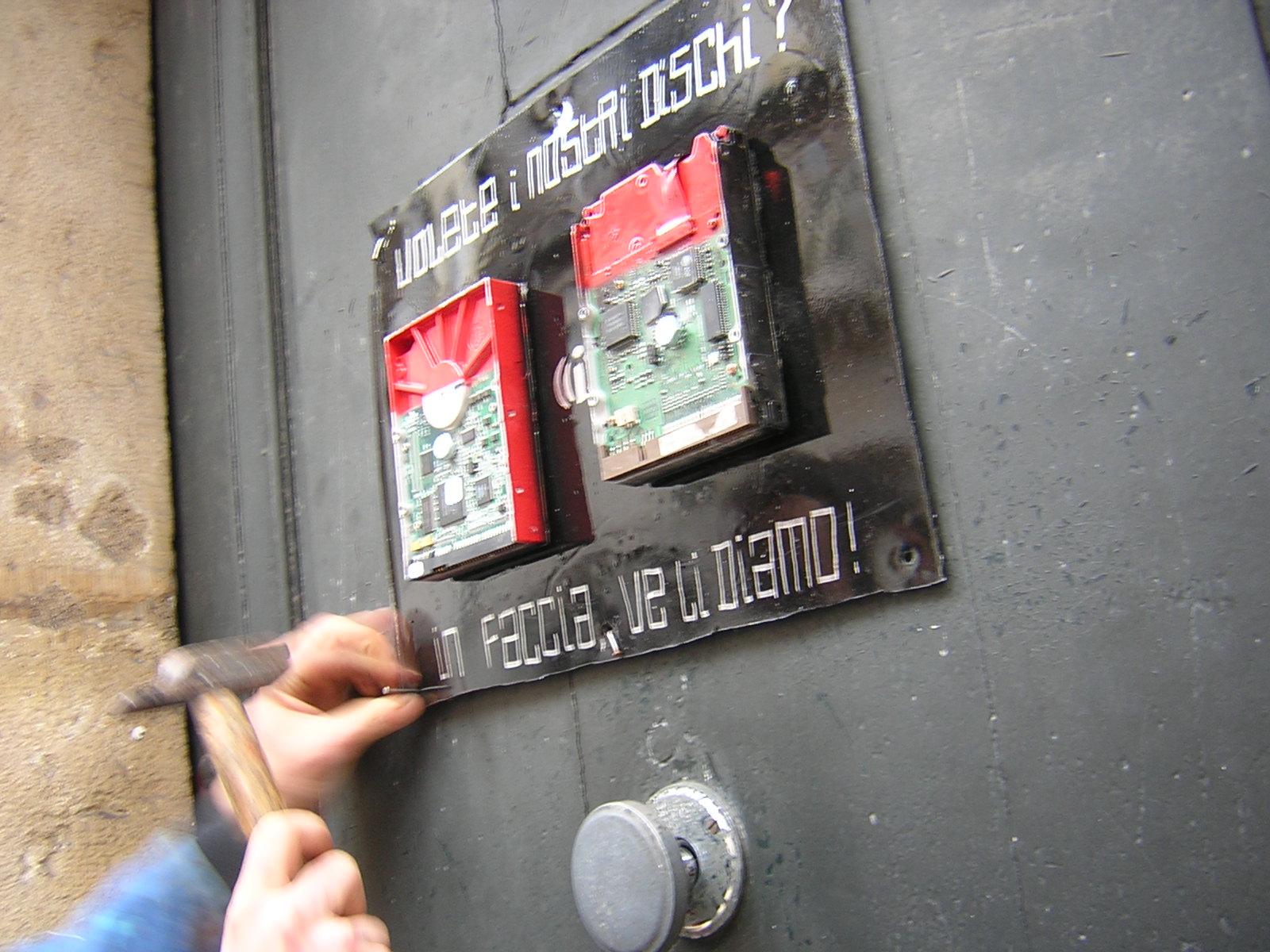 Trophy of shame nailed to the italian consulate 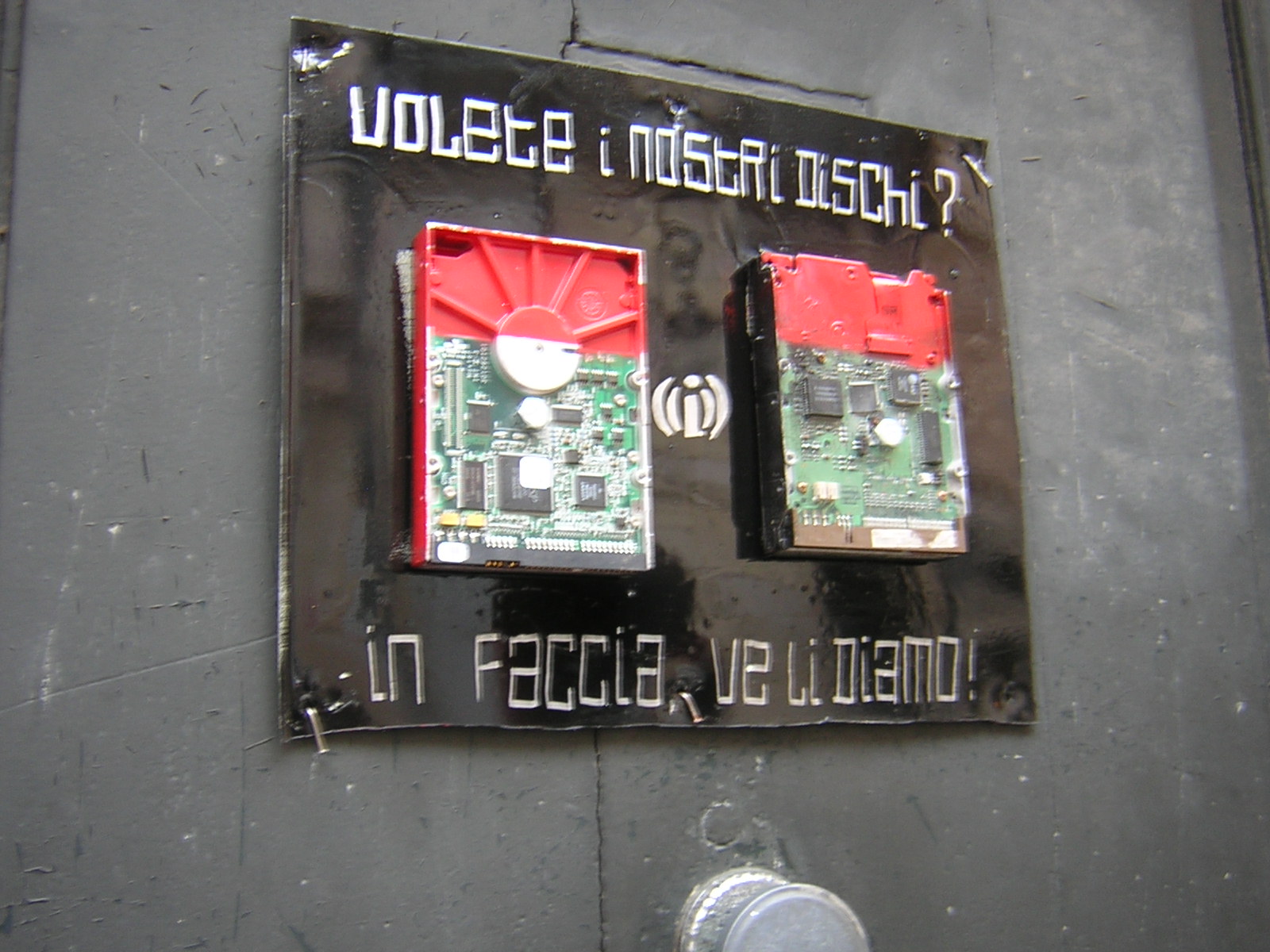 "you want our hard-disks? we throw them in your face!" 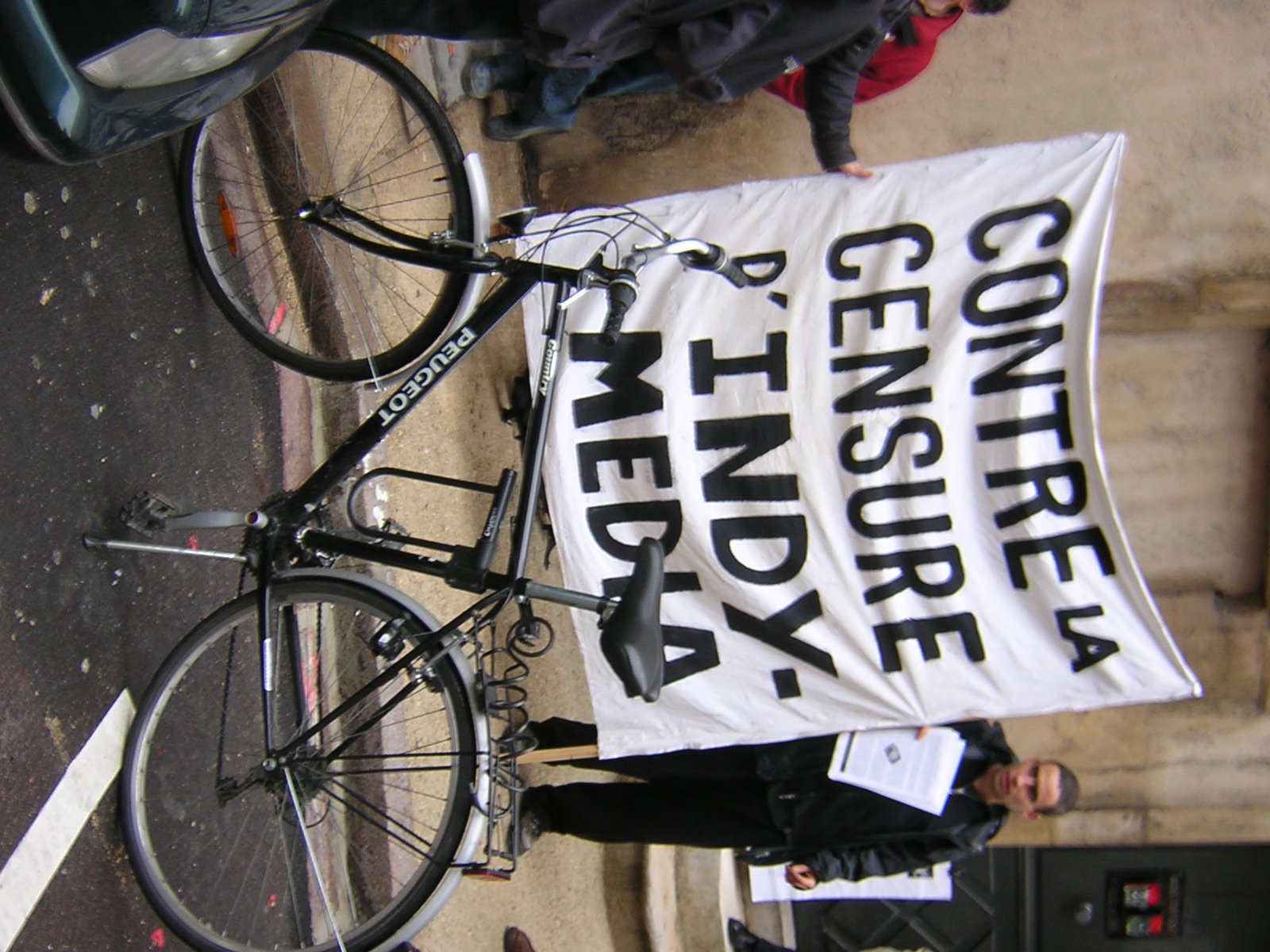 banner: "against the censorship of indymedia" 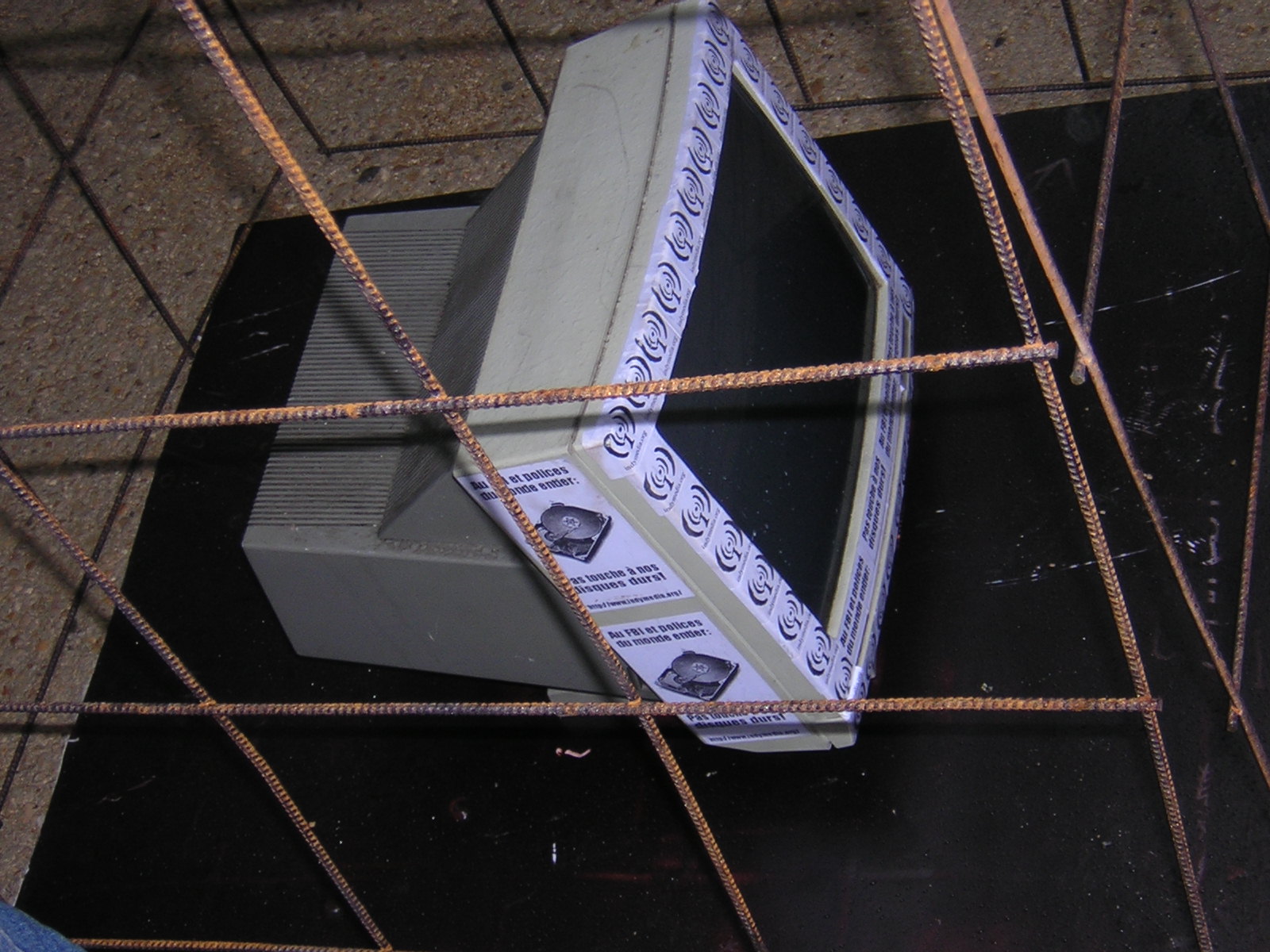 For photos of the action, flyers and miscellaneous material, see

PRINT (hacklab/autonomous computer workshop) & PASSION (anarchist action
collective) had called for an action in solidarity with Indymedia on
Thursday 4th, November 2004, to protest the repression campaigns
initiated by swiss, italian, and US authorities.

The action aimed at putting direct pressure on the italian government
through an occupation of its local representation. It also meant to
inform passers-by about the Indymedia network and the alarming threats
on dissident information initiatives (details in the call to action
[1]).

At about 1.30pm, some 20 people met in front of Dijon's italian
consulate. A metal plate bearing two red and black hard-disks was
nailed to the frontdoor of the consulate. A slogan in italian was
written on it: "VOLETE I NOSTRI DISCHI ? IN FACCIA, VE LI DIAMO!" ("YOU
WANT OUR HARD-DISKS? WE THROW THEM IN YOUR FACE!"). This trophy of shame
made the repressive politics of the italian state visible.

A cage containing a computer with the Indymedia logo was installed in
front of the consulate, as well as a banner showing "AGAINST THE
CENSORSHIP OF INDYMEDIA".

A lot of information flyers [2] were distributed , as well as stickers
advertising "TO FBI AND POLICE OF ALL COUNTRIES: STAY AWAY FROM OUR
DISKS!" [3].
Some indymedia exhibition boards were hung in the street, in order to
present the Indymedia network to curious on-lookers.

After an hour of gathering and discussing in the rain, demonstrators
came together to occupy the consulate, in order to demand the sending of
protest faxes to the italian government. But once inside the building
hall, we found a closed door and a notice announcing an "exceptionnal
closing for the 4th of November". What a coincidence! Keep in mind that
Dijon's italian consulate has been regularly occupied over the last few
years, in reaction to the italian government's repressive politics. We
presume that the announcement of the action made them shut the place
down for the day. Therefore, we left, leaving souvenirs and protest
decorations on the walls, floors, doors and mailboxes.

Our freedom of action and information strongly depends upon our
visibility, and upon the concrete pressure we can put against states and
their police. We hope that this demonstration, together with various
other support actions being carried in the last few weeks, will be
followed by others. We're willing to share the material we produced for
this action with interested collectives: press releases, flyers,
stickers, exhibition boards and posters can be found on our website [4].