The US led attack to occupy the Iraqi city of Fallujah will take time according to US terrorist Donald Rumsfeld but he said, "US-forces will see it through to the end. I think it's a tough business, and it's going to take time," he said.

Perhaps a little bit tougher Rumsfeld if you happen to live there? 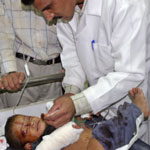 The attack on the Iraqi city of Fallujah has taken its toll on Iraqi civilians no doubt including children and young babies. Iraqi's have witnessed civilian casualties. Yesterday during the assault on the main hospital nurses and patients were blindfolded after the US/Iraq militia stormed the main hospital and took control.

The US led attack to occupy the Iraqi city of Fallujah will take time according to US terrorist Donald Rumsfeld but he said, "US-forces will see it through to the end. I think it's a tough business, and it's going to take time," he said.

Perhaps a little bit tougher Rumsfeld if you happen to live there?

He made his remarks as US artillery, war planes and tanks pounded the Iraqi community of Fallujah at the start of an operation by about 12,000 US/Iraqi militia who also attacked the city west of Baghdad.

The onslaught was unleashed after US puppet Iyad Allawi "Sock" announced he had given the go-ahead for the US/Iraqi militia to occupy the city, the symbol of potent resistance that is hell bent on undermining his US-backed puppet government.

The ground assault is expected to involve street fighting, which would extract heavy casualties from both civilians and resistance fighters. An unknown number of Fallujah's 300,000 residents have fled the city another unknown number are wounded and dead.

Donald Rumsfeld said, "There are going to be large numbers of civilians killed, by US forces".

US forces have shown they are not disciplined after they tortured alleged enemy combatants at the Abu Grahib prison complex and most Iraqi citizens will do any they can to avoid being caught by the occupying militants who either torture or kill.

Rumsfeld said no one knew how many civilians remained in the city?

About 3,000 US militants have entered Fallujah from the north.

Four battalions of militants, on a front spanning some five kilometres have advanced about one kilometre inside the city. The US/Iraqi forces are waiting to enter the city.

The attack was playing out on two fronts, one in the north-west across the Jolan district, considered to be the heart of resistance activity, and the other in the north-east, in the direction of the train station.

The skies above burned red late into the night as artillery, warplanes and tanks pounded the Iraqi resistance bastion, west of Baghdad, with a barrage of firepower.

Freedom fighters responded to the onslaught with mortar fire.

US militants initially laid siege to Fallujah in April but later pulled back after a negotiated agreement.

Mr Rumsfeld suggested the current campaign would be different.

"I could not imagine that it would stop without being completed," he said.

Asked whether the operation, dubbed by the Americans Phantom Fury, would be pressed to the end, he said, "Absolutely".

The US reported it was necessary to eliminate "resistance" havens such as Fallujah in order for Allawi's puppet government to take over.

"Sock" the puppet was put in place by the US, which pre-emptively invaded Iraq in their illegal and degrading war on the sovereign nation in an attempt to get to Iraq's oil reserves.

The US/Iraqi militants are attacking Fallujah to ensure they have complete control for the US and the Coalition of the Killing their co-offenders.

If Iraq is to be controlled by the US they have to get complete control of the country. Part of the country cannot remain under the rule of resistance and freedom fighters.

US/Iraq militants are running roughshod over Fallujah and they've chosen the path of violence. This is a devastating time in the history Iraq.

An unknown number of Fallujah's 300,000 residents have fled the city. The ground attack is expected to involve street fighting, which would extract heavy casualties from both civilians and resistance fighters.

US/Iraqi militants entered the hospital without firing a shot, blindfolding some of the nurses and sick people and kicking down some doors, according to a reporter.

Allawi's order supposedly sustains the illusionary propaganda for some in the International Community (with rose coloured glasses). Who apparently are supposed to see this decision coming from an interim Iraqi Government perspective? However in reality it's clearly giving the US occupiers some illusionary "legitimate" right to impose curfews set up checkpoints, and search and detain subjects, preceding an "invasion" on any resistance.

US warplanes and artillery attack Fallujah!

About 20,000 US/Iraqi militia are gathered around Fallujah amid mounting expectations of a major attack to quell resistance by the city from the grip of the coalition of the killings illegal and degrading occupation of Iraq.

Fallujah and the Reality of War

U.S. forces began allowing everyone to leave â?? except for what they called "military age males," men usually between 15 and 60. Keeping noncombatants from leaving a place under bombardment is a violation of the laws of war. Of course, if you assume that every military age male is an enemy, there can be no better sign that you are in the wrong country, and that, in fact, your war is on the people, not on their oppressors,, not a war of liberation.

Who's counting the dead in Fallujah? CARE?

The killing of 100,000 innocent men, women and children in Iraq to date should be enough for others who CARE. People not sure of the legality, validity and rational for their killing should understand the alleged demon Saddam Hussain wasn't worth the sacrifice of those innocent people. Does anyone CARE about this dead baby?