U.S. forces launched a major offensive on Monday night 8th November to regain control over the Iraqi rebel-held city of Fallujah. As of the morning of Tuesday 9th November fierce fighting is taking place within Fallujah. Ground troops are meeting opposition, while US artillery and missile-firing helicopters are pounding city buildings. Many civilian deaths are expected. Meanwhile on Monday another Black Watch soldier was killed.

In response in Edinburgh red paint and anti war slogans were sprayed on the US consulate [report | update and picture]. 100-150 protested in Parliament Square, Edinburgh, while protesters blocked roads in London and demos were scheduled for Monday evening in at least 30 locations Britain-wide. [Indymedia UK feature] 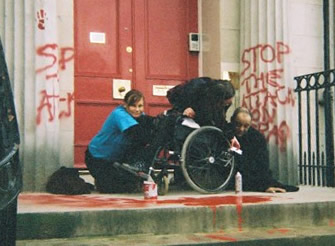 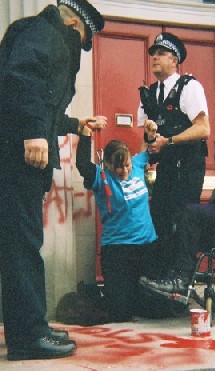 Four local residents were arrested on Monday 8th at the US Consulate in Edinburgh - protesting at the continuing US murderous attack in Falluja. Already there has been huge civilian loss of life in Iraq since the start of the illegal war. Red paint 'blood-stained' the steps of the Consulate, and activists spray painted slogans 'Stop the Attacks on Iraq'. The four are still in custody and will be appearing in court on Tuesday 9th.

Rose Gentle started a campaign following the death of her soldier son Gordon in Iraq. From the council scheme of Pollok in Glasgow, Rose Gentle reckons only three or four lads in her street have work -– as part-time school cleaners. “ Before he signed up, her son was on £42 weekly benefit. After dropping into his local JobCentre last November, Gordon got talking to the soldiers on the army recruitment stall. Next thing his parents knew, officers were calling at their house and driving him to the recruitment office to watch videos. His parents tried to talk him out of it, but he didn´t see any future for himself in Glasgow. http://www.sundayherald.com/44361

It is planned to replace the Black Watch in operation near Fallujah with the Scots Guards in December. But the government is now worried that growing opposition may make this politically difficult. An Edinburgh anti war activist told us: "Anti war demonstrators and dissidents within the army can be encouraged. By stepping up our activities we could win a concrete victory - we could stop the deployment of more British troops to back up the US forces." (see Justice not Vengeance http://www.j-n-v.org/AW_briefings/JNV_briefing068.htm )

A National Public Radio correspondent embedded with the Marines outside Fallujah reported desertions among the Iraqi troops fighting alongside the US forces. One Iraqi battalion shrunk from over 500 men down to 170 over the past two weeks — with 255 members quitting over the weekend, the correspondent said .

RESIST In response to the Fallujah attack, over 30 protests were planned round Britain for the evening of Monday 8 November. (see http://www.indymedia.org.uk) In Edinburgh around 100-150 people rallied at Parliament Square, High Street.

In central london on Monday evening around 100 people took direct action in direct response to the attack launched today by the US against the city of Falluja. Actions are planned again on Wednesday 10th November - meeting at 7pm at the statue of Edith Cavell (opposite the entrance to the National Portrait Gallery, north-east of Trafalgar Square).

Demonstrations against the attack on Fallujah are starting in the USA too, for example in New York city.

In London around one hundred people gathered from 7pm on Monday evening and then blocked the road at the top of Whitehall, near to Downing Street for around ten minutes. When police arrived the group blockading the road soon moved across the bottom of Traf Square and up to Leicester Square.

At Leicester Square the Queen was attending a cinema premiere, and the demonstrators paused for around ten minutes making a loud protest.

After around ten minutes the group then moved on to Piccadilly Circus and again blocked the road. At around 8.47pm police had moved in and surrounded a small number of the group who had not moved out of the road quick enough after police ordered them to do so. Up until that point there had been no arrests.

One of those supporting the action said "it is vital that people do more than simply march from A to B, or gather to listen to speeches".

The action had come out of a meeting called by Voices in the Wilderness UK in London on 26th October, where an ad hoc group of people agreed to take part in nonviolent direct action on the night that the assault of Falluja begins.

This evening it was announced that people will take action again on Wednesday 10th November. Again meeting at 7pm at the statue of Edith Cavell (opposite the entrance to the National Portrait Gallery). This will follow the handing in of wreaths to Downing Street by Military families at 4pm, and a Protest and Rally at Parliament Sq. running from 5.30pm - 7.00pm http://indymedia.org.uk/en/2004/11/300795.html

As of the morning of tuesday 9th November fierce fighting is taking place within Fallujah. Ground troops are meeting opposition, while US artillery and missile-firing helicopters are pounding city buildings. Yesterday, Monday, troops entered the western part of the city, where they attacked and occupied a major hospital, handcuffing staff and patients and closing down the hospital. Dozens of Iraqis have been killed in the opening round of the offensive.

Lt. Col. Pete Newell, a battalion commander from the U.S. Army's 1st Infantry Division, said, "We're going to start at one end of the city, and we're not going to stop until we get to the other. If there's anybody left when that happens, we're going to turn around and we're going to go back and finish it." http://nyc.indymedia.org/feature/display/130969/index.php

After nightfall, U.S. forces entered the northwestern Jolan neighborhood. At the same time, another force of 4,000 soldiers pushed into the northeastern Askari district, the U.S. army said. Intense air raids and artillery fire pounded the city as the Marines approached Fallujah 50 km (32 miles) west of Baghdad. A little earlier, heavy gunfire was heard throughout the outskirts as U.S. forces clashed with Iraqi resistance. A military spokesman said that at least 42 rebels were killed during the clashes.

Earlier on Monday, U.S. troops and special Iraqi forces seized the main hospital in the rebel- held Iraqi city without engaging in any fight, said a reporter embedded with the troops.

Hospital officials said before the U.S. troops cut the hospital's telephone lines, several patients and workers had been detained.

Iraqi forces from the 36th commando battalion stormed the hospital without fighting, blindfolding some people and hospital employees and kicking down some doors, according to the reporter. Patients were taken to a hospital inside Fallujah by U.S. marines in armoured vehicles.

Seizing the city's main hospital marks the beginning of a deadly offensive by not less than 20,000 U.S. and Iraqi forces stationed across the rebel-held city to regain control over it and curb resistance there.