A newly-formed group of Climate Skeptic scientists descend on the Campaign Against Climate Change march to preach the REAL TRUTH!!!!! about climate change. 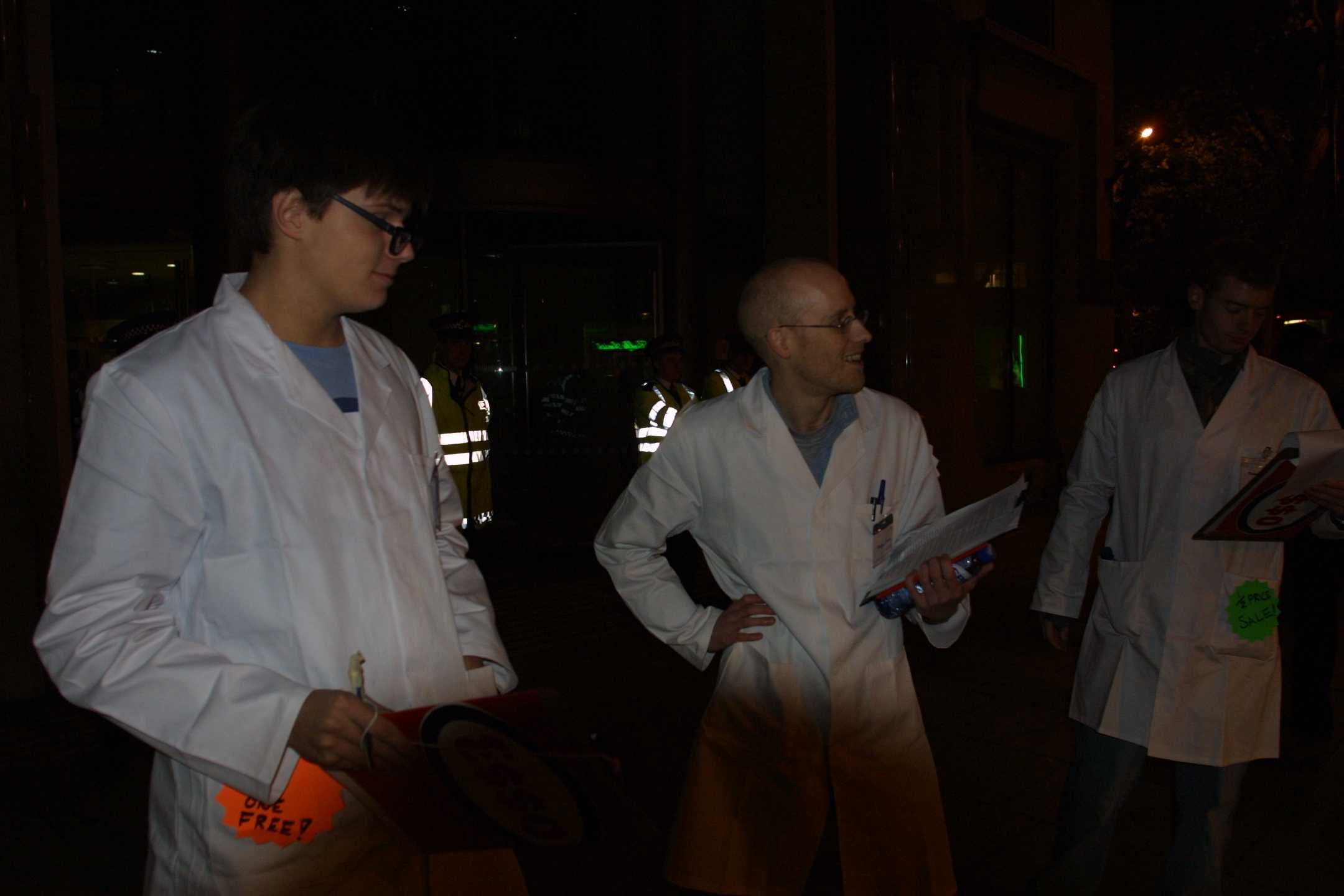 On the 4th of November, 4 scientists from the newly-formed group Western European Tautological-Approach Liasons Knowingly Creating Ridiculously Antagonistic Pronouncements, or W.E. T.A.L.K. C.R.A.P., descended on the CaCC march, to offer a view of climate change which in no way was linked to that of ExxonMobil / Esso.

These fine, upstanding members of the scientific community, easily identifiable by their white coats and clipboards, stood in from of the ExxonMobil HQ, lecturing the great unwashed at length, explaining away their concerns with such statements of fact as:

"Climate Change is a myth, perpetuated by the Communists in the European Union, in an attempt to standardise our climate."

"It is simply not true that Global Warming is a problem. Why, from September 2003 to March 2004, the temperature in the United Kingdom was, on average, colder than during the summer months."

"I can prove to you using cost benifit analysis, that, taken over a five year period, we'd be better off without Bangladesh."

When faced with a sea of disbelieving faces, the group, who aren't in any way funded by Esso, placed their fingers in their ears and chanted "I can't hear you" in unison.

When asked why they had come, the scientists looked cryptically at the Esso building behind them, patted mysteriously bulging wallets, and replied:

"We're here to counter the myths put out by hippies, eco-facists, and

http://www.exxonsecrets.org. Climate change isn't happening. And besides, there'd be a lot more environment left if vegetarians stopped eating it."

Like the Competitive Enterprise Institute, and the International Policy Network, W.E. T.A.L.K. C.R.A.P. are a team of independent scientists, in no way swayed by recieving hefty donations from corporate oil interests.

"It's a fact, that if you believe in Climate Change, you're supporting terrorism," one of the scientists remarked in a serious voice. "And do you want to support terrorism? Climate change is like gravity and evolution. A scary tale told by communists to hamper American competiveness."

"Look," said one, "all the scientific evidence may point to global warming, but there's a load of un-scientific evidence that totally refutes this. And people should pay more attention to that. Climate change is good for the economy. If we stopped wasting money on cutting CO2 emmisions, we could afford to invade two Middle Eastern countries a year."

After much boos and jeers from the crowd, the scientists marched proudly on, imploring bemused by-standers not to believe what they read at