In the wake of Bush's re-election, a string of militants are rising up and taking direct action against Republican, military, and corporate targets. You are cordially invited. 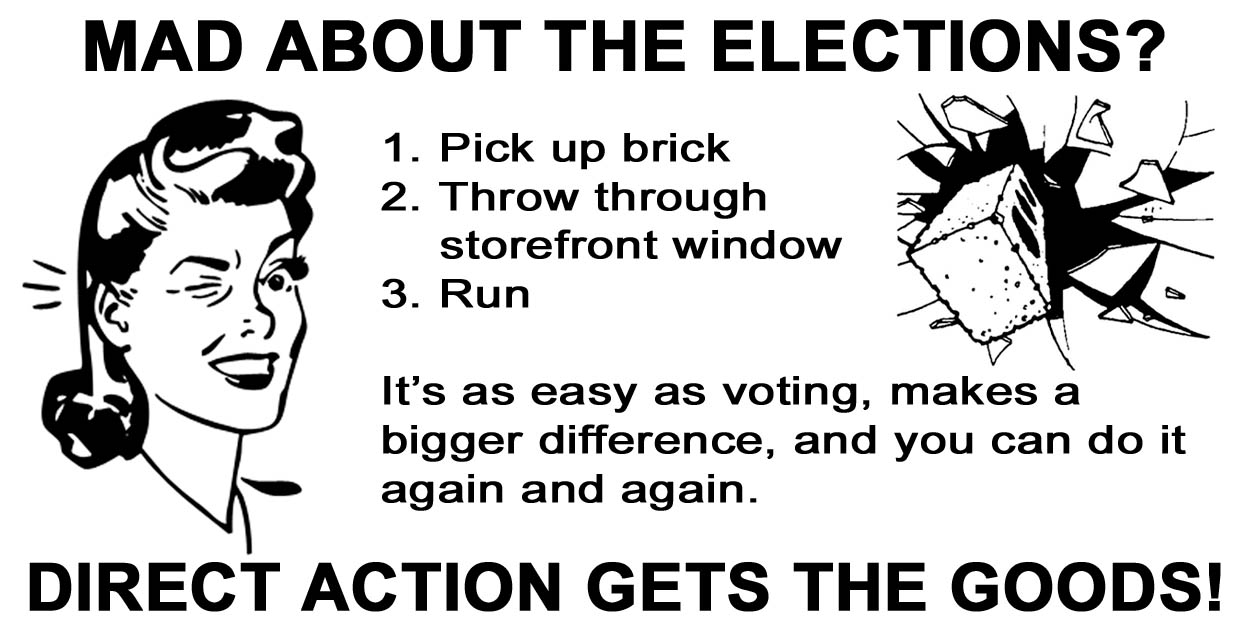 add some life to your town with these stickers!

Vandals cause major damage to Wal-Mart

We held our signs high. We passed out flyers. We've marched in the streets. We've blocked traffic. We made noise and cried out against the war, against oppression. We went home with uplifted spirits, again preaching to the choir and irking passersby. We even went out and voted.

But the monster is still in office. There is to be four more years of absolute terror in the white house. Four more years behind a veneer of moral values and nationalism. We are fucking mad.

The resistance will not be hindered by this election. But if we are to survive, we are going to have to call into question our tactics and whether they are effective. The same protest and black bloc tactics have become predictable. The FTAA in Miami and the RNC in New York City proved that they are ready to handle whatever we can throw their way. Direct confrontations with police are only going to get us beaten and arrested while newspapers and politicians laugh at us. Stripped searched, scoffed and spat upon.

We won't get anywhere by bargaining with them. We need to stop them, put the pressure on, and make them feel afraid. They need to go go to sleep every night pissing their pants in terror.

We need mass decentralized actions, fucking shit up at night. In every city, against, against military recruitment centers, against republican offices, against banks, against walmarts, and against - every component of the military industrial compex.

DIRECT ACTIONS GETS THE GOODS

You know what needs to be done. You know how easy it is to throw a brick. How much magic flows out of the tip of a sharpie. How a fire can destroy and create at the same time. How easy it is to pour it down a funnel into the bottle. It's amazing what you can accomplish with two or three people at night in the shadows. It's all up to you now. We are everywhere.