Will the Democrats break out the toilet paper? Many Average citizens out here in unofficial America have a Bounty of evidence to expose and clean up the stench. This defecation was done in plain public view, and recorded in the public record. Since voting is the Right which secures all other Rights and confers legitimacy on the ultimate 'Commons' Our Representative Government-this bowel movement was ejected on the Public Square, so a charge of public indecency needs to be included on the arrest warrant.
Or will the Flies-in the form of diversionary news stories eat the PooP before we can break the Scoop? Even Mother Nature renews and cleans up after herself, can't sentient beings with free will be permitted to ensure trust in this fundamental right to bear witness to the will of The People? 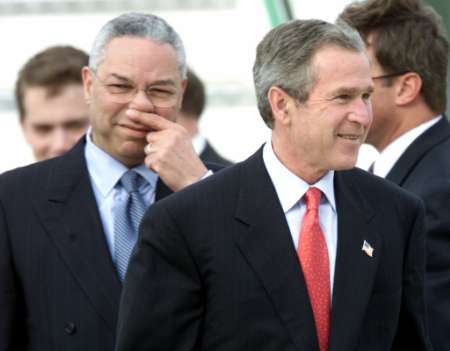 A psychological, intellectual war has been declared on reasonable thinking people. If this cyber-attack is not impeded, it can only mean a continuance down the irrational path-illogical course towards a theocratic dictatorship. An Inquisition will begin in earnest on progressives and creatives who can envision the Flowering of the Human race, they need to stand up, speak out and reach out to those with weak faith and errant motivations who fear the Flowering of the Human race. When the most thoughtful, caring and intelligent members of society are denigrated, stigmatized and persecuted by the currently, ignorant, misinformed, mean, deluded and apathetic human simulcrams or biological robots a dreary materialistic machine over man like future can happen instead of an Organic, reenchanted rennaissance which resonates symbiotically with the Natural world and worships our Mother- EARTH.

Please see the link below that explains what some Bush supporters who are into a cult called christian reconstructionism or dominionism have in mind for those of us who think independently and different than them including those of us who take seriously our inalienable right to exist on this planet at the behest of Natural Law and will not submit to Corporate legal fictions.

if the subhuman irRepublicansponsibility party took the poop, the media tried to wash it away by peeing on the pile, Kudos to MSNBC, but i heard the cashier at a home depot say her gramma is not watching CNN- the Controlled News Network. Cnn calling the basic request for fair, free, legitimate and transparent elections a conspiracy- is in itself A CONSPIRACY, the biggest conspiracy is not to believe there is any!

The working folk out here are preparing a very good case, imagine what trained specialists, high powered lawyers CAN DO! The Dems need to challenge this or they will never get the temporary respect, volunteers and money exemplified by this massive turnout. Believe me THERE WILL BE DANCIN" IN THE STREETS if Kerry UNconcedes and defends his country an It's principles once again. People are very receptive and prone to smiling when they hear that this is not over, My moms friend is still going to church but not taking communion till this is straightened out.

Of all the constitutional and procedural indiscretions this administration can be tried for , tamperin with our sacred right to vote, the very essence of democracy and self-determination is the final straw and will activate mainstream participation in the Who-decides-Who-gets-What Process that can only be healthy and for the good of the Whole wide World!

My slam poem to help the Next President and Vice President of the United States John Kerry And John Edwards- good luck!

WE Decide and WE DID!

So, of course, THEY HAD to be Manipulatid

NO CHANCE and NO! CHANGE

Shame, The Vote was HACKED

Hamper, Tamper With O-HiJack the Vote, Like Iraq now WE.. are... Jacked!

the Deck was Stacked, thats a FACT-

KERRY DEMOCRACY AMERICA ***WE GOT YOUR BACK

TO VOTE FOR our REPRESENTATION IS the Basis of this NATION

without this SLACK a FUTURE and FREEDOM.... We Will LACK

Ahmanson is also one of the bagmen behind the extremist "Christian Reconstructionist" movement, which openly advocates a theocratic takeover of American democracy, placing the entire society under the "dominion" of "Christ the King." This "dominion" includes the death penalty for homosexuals, exclusion of citizenship for non-Christians, stoning of sinners and we kid you not slavery, "one of the most beneficent of Biblical laws."

INSIDE THE ELECTION FRAUD BATTLE

it's wonderful the firefighters saved that small black child who fell in the well ,though i hope this Mr. Blackwell from oHIo does not fare as well, under the scrutiny coming his way, just look at what he is UPTO now, that it is time to count the provisionals.

To Believe That Bush Won The Election, You Must Also Believe...
By TruthIsAll

To believe that Bush won the election, you must also believe:

2- That Zogby's 5pm election day calls for Kerry winning OH, FL were WRONG. He was exactly RIGHT in his 2000 final poll.

3- That Harris last minute polling for Kerry was WRONG. He was exactly RIGHT in his 2000 final poll.

4- The Incumbent Rule I (that undecideds break for the challenger)was WRONG.

7- That Greg Palast was WRONG when he said that even before the election, 1 million votes were stolen from Kerry. He was the ONLY reporter to break the fact that 90,000 Florida blacks were disnfranchised in 2000.

8- That it was just a COINCIDENCE that the exit polls were CORRECT where there WAS a PAPER TRAIL and INCORRECT (+5% for Bush) where there was NO PAPER TRAIL.

9- That the surge in new young voters had NO positive effect for Kerry.

10- That Bush BEAT 99-1 mathematical odds in winning the election.

11- That Kerry did WORSE than Gore agains an opponent who LOST the support of SCORES of Republican newspapers who were for Bush in 2000.

12- That Bush did better than an 18 national poll average which showed him tied with Kerry at 47. In other words, Bush got 80% of the undecided vote to end up with a 51-48 majority - when ALL professional pollsters agree that the undecided vote ALWAYS goes to the challenger.

13- That Voting machines made by Republicans with no paper trail and with no software publication, which have been proven by thousands of computer scientists to be vulnerable in scores of ways, were NOT tampered with in this election

Twenty-nine counties in Florida actually reversed their vote, from their registrations.

http://www.opednews.com/wade_111104_media.htm
The 2004 Rigged Bush election has already made it into Wikipedia
Posted by ElementaryPenguin
Added to homepage Wed Nov 10th 2004, 02:01 PM ET

And it's well done also. Check it out.


And did you hear? the heartless usurpers intend to change the name of the Thansgiving holiday To ThanksTaKing day! to reflect the artificially imposed reality of a more Moral, conservative empire.
My previous story - NEVER in U.S. presidential politics have massive crowds shown up to endorse an incumbent!