Report of Troops Out Demo in Glasgow on Saturday 13th November 2004.

This is a 1,000 word report of the Troops Out demo in Glasgow on Saturday November 13th 2004. Six labelled photos are attached. 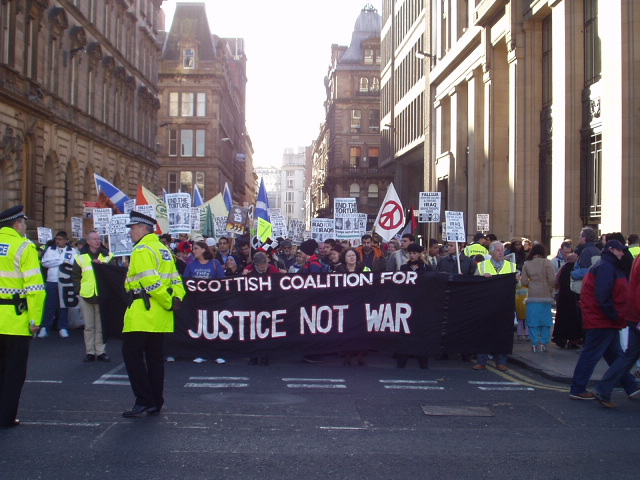 Start of march in Hanover street, off George Square, Glasgow. 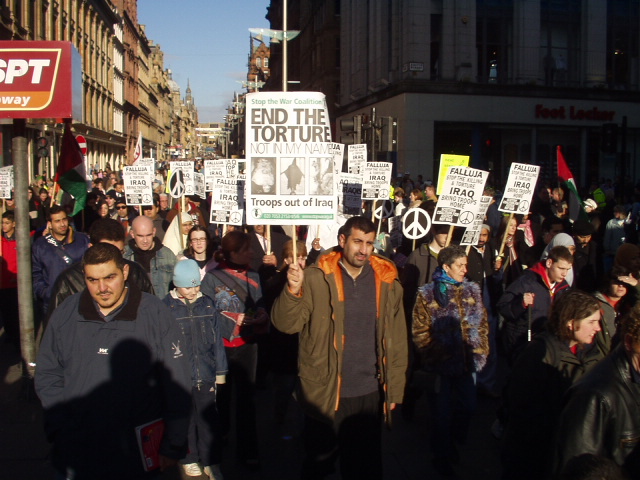 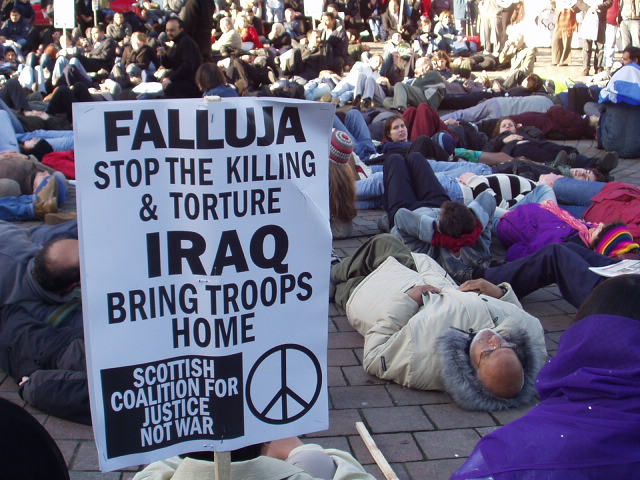 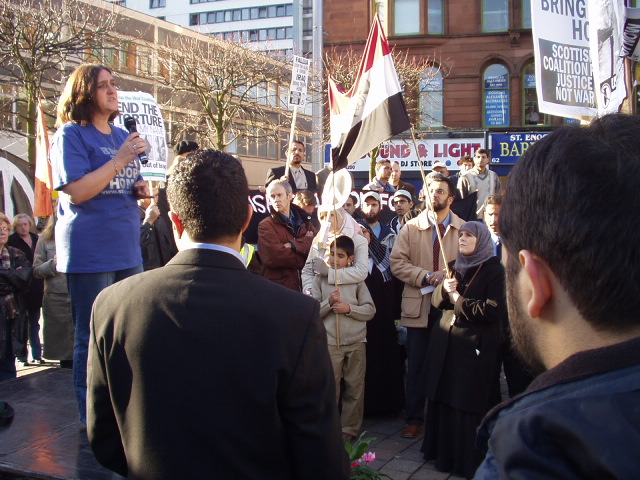 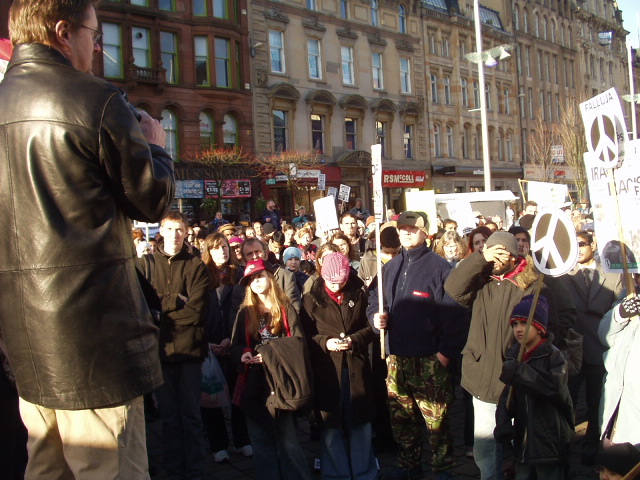 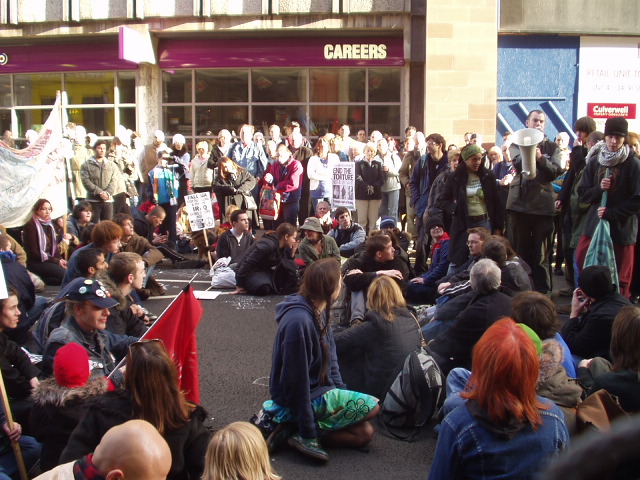 An all-Scotland Troops Out demo, called by the Scottish Coalition for Justice not War, was held in Glasgow today. The crowd of around 2,000 assembled in Hanover Street just off George Square in bright, cold, autumn sunshine. Moving off at just before noon there were drum beats and chants of `Power to the people` and `Get the troops out now! `
Banners and placards were seen from around Scotland: `Stirling Uni – People and Planet`, `Renfrewshire coalition for justice not war ` and `East End (Glasgow) against War. `
The protest march went around George Square past the cenotaph where a minute’s silence was observed for all those who had died in all wars. There were snatches of `Viva España! ` - referring to the decision of the Spanish Government to withdraw its troops from Iraq. Chanting `Murder in Fallujah, Troops out now! ` and `We all live in a terrorist regime` the protest went along St Vincent Place, St Vincent Street, Renfield Street, Union Street to Argyle Street and St Enoch Place. The rally was held outside the St Enoch shopping centre at 12.30 where Isobel Lindsay of the Scottish Coalition for Justice not war addressed the rally. There was a five-minute die-in, which was followed by a number of speakers.
First speaker was Rosie Kane of the Scottish Socialist Party who said that the whole infrastructure of Fallujah had been flattened. While Iraq was on fire the two jokers (Bush and Blair) were meeting in America and discussing the state of the planet. She spoke of how working class people through the ages had been used as cannon fodder for capitalism’s wars. She called the army recruitment officers stalkers who collect our children, put guns in their hands, turn their heads into mince and turn them into killing machines. She shouted “ No more economic conscripts!”
Next was Sandra White of the Scottish National Party who reminded the crowd that there were mo weapons of mass destruction in Iraq and said that Bush and Blair were the criminals and not the people of Fallujah. She said that there had been reports that the Americans had dropped nerve gas on Fallujah. She said that first minister Jack McConnell did not speak for the Scottish people. While praising the people who had taken place in the die-in she reminded the crowd that those who lad lain down in Fallujah could not get up again.
Next was Rose Gentle whose son fusilier Gordon Gentle was killed by a roadside bomb in Basra on June 28th. She related how she had been down to Downing Street to try and see Tony Blair but he wasn’t available. She called for all the boys to be brought home, not in body bags but alive. She said she would keep on trying to see Blair and that she would haunt him till the day she died.
Then Patrick Harvie, the Green MSP for Glasgow, spoke. Just before he spoke it was announced that the Scots Guards had been sent in to Fallujah. He said that the US military were quite open in their objective of killing as many `insurgents ` as possible. He ridiculed the idea that Bush had won the election on moral grounds.
After that an Iraqi called Mahmoud al Sabah spoke and told the assembly that he knew Fallujah very well. It was a very laid back place and he was surprised that they had withstood the might of the American army. The people were being slaughtered not just by bullets but also by a systematic killing machine, which used chemical weapons and nerve gas. He said the Americans were the terrorists. He said that some people in Fallujah hadn’t had anything to eat in six days.
It was then announced that there would be an anti-war demonstration in Perth next Saturday 20th November at 11.00am.
The final speaker was the Rev John Mann, an American, who is a Church of Scotland minister in Pollok and who has been very supportive of the Gentle family. He said: “This whole war was based on lies and misinformation.” He said shame on Blair and Bush. He said it was a great honour to walk side by side with his Muslim brothers and sisters.
Gill Hubbard of Globalise resistance reminded the crowd of the G8 gathering at Gleneagles, Perthshire next July. Speaking of the war she said there were 100,000 reasons for the war to end.
Some of the protesters then went to the Armed Forces recruiting office in Queen Street for a sit down protest. Signs chalked on the road read: `Stop the occupation of Iraq`, `Troops out now! ` and ` Free Iraq! `. There was a noisy and prolonged chanting of `Murder in Fallujah, Troops out now! ` while the bullhorns were passed around for contributions. The police were fairly tolerant of the sit down protest at this point though they asked for the road to be cleared several times to allow traffic up Queen Street after which the sit down was resumed. Refrains of `Say hey, ho, Bush and Blair have got to go` and `Get the troops out now` were heard as the sit down continued.
Paul O’Hanlon of Edinburgh Stop the War read out some of a statement written by Iraqi Scot Susan Karim. She organised two sponsored walks for Iraqi orphans which raised £17,000. Susan said `Let the Iraqis decide their country’s future, bring our troops back, and end the occupation now! ` Paul also announced the latest figures from the BBC two O’clock Radio 4 news which stated that 1,000 were said to have died in Fallujah but the phantom Al Zarqawi had slipped away (again!).
After an hour in Queen Street some of the demonstrators walked up to George Square past the gallery of Modern Art with its statue of the Duke of Wellington wearing a traffic cone on his head. In George Square several young protesters attempted a sit down but at this point the police seemed to become more aggressive and there were four arrests.
Six labelled photos of the day are attached.