Your cops are your responsiblity- The Aubonne Bridge fight continues

On Friday the climbers of the Aubonne Bridge Action entered the Chateau in Lausanne, seat of the government of Vaud, Switzerland with a banner saying "Your cops are your responsibility!" The two activists, who nearly had been killed by the
police cutting their climbing rope during the G8 last year, together with
supporters and the press, asked the Conseil d'Etat to accept responsibility
for the actions of their police force. 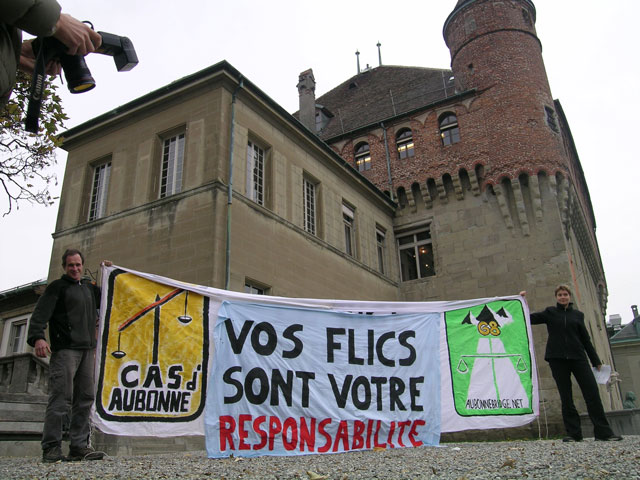 Your Cops are your Responsibility!

Justice for Aubonne - The fight continues. Action au Chateau: Martin Shaw and Gesine Wenzel demand disciplinary action and compensation. Their appeal against the judge's whitewash of the police declares the police intervention on the Aubonne bridge as illegal and requests further investigation.

A document produced by their lawyer requested disciplinary action to be taken
against the officer who cut the rope, Michael Deiss, and his senior officer,
Claude Poget, for their illegal intervention. Until now the state has been
ignoring the fact, that both have been disobeying the official G8 guidelines
and neglected their duty to protect human life. Nothing has been done about
the obvious dysfunction of the internal police hierarchy. The G8 guidelines
stipulated that the police have to engage in communication with protestors,
even in spontaneous actions. The instructions were to act proportionally and
to respect the right of freedom of expression. At the same time compensation for the injuries and the suffering of the climbers has been claimed based on the Loi sur la responsabilite de l'Etat, des communes et de leurs agents. The state has been invited to engage spokes people to enter negotiations.

A 23 page appeal against the decision of the exmining magistrate to whitewash
the police has been handed in to the Tribunal of the Canton of Vaud. The
tribunal has been asked to charge Poget and Deiss for endangering life and
severe body harm to Martin Shaw and simple body harm on Gesine Wenzel plus
charging Poget for false testimony. The latter had made several false
statements that are in clear contradiction to the video evidence.
Considering that the instruction judge had ignored the requests for
investigation from the accusing party, the open questions were repeated to the
higher court: How can it be that police teams are formed that can't
communicate? Had the Swiss German police reinforcement permission to act
although they could not even understand orders or information? What was the
content of the Poget's phone conversations before the cut of the rope? To what
extent was language a real problem? Which orders and which information was
given when, by whom and to whom?

The declaration of the instruction judge had been criticised for being biased.
It contains elements that are arbitrary and contra-dictionary to the file. The
judge had ruled that the temerity of the activists were the main cause for the
incident. Martin Shaw rectifies: "The biggest "mistake" we made was to believe
that the police would actually follow their orders !" Gesine Wenzel said despite he history of police impunity in Switzerland and the general rise of repression of political dissent: "How is it possible, that we have been declared guilty for endangering the lives of the drivers and the police who nearly killed us are let off without even a trial?How can people still believe they live in a democratic, neutral country when double standards are so obviously applied?" Martin Shaw is certain: "Now is
the time for the politicians to accept responsibility."