Polish Solidarity Night, This Saturday, At Bradford '1 in 12'

Despite rumours being maliciously spread within Leeds this Saturday's Polish Solidarity Night is very much ON. 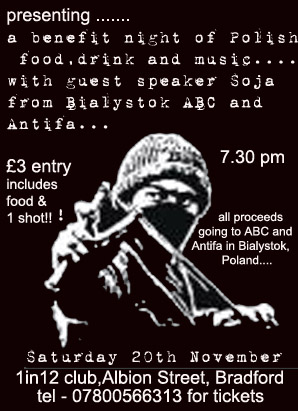 Contrary to rumours being spread maliciously within Leeds, the Polish Solidarity Night at the ‘1 in 12’ Club this Saturday, the 20th November, is very much ‘ON’. The night will take place in the café area, and will include Polish music, food, and of course vodka, with the £3 admission price including the buffet and a shot of vodka (more will also be available of course!) Soja from Bialystok Anarchist Black Cross and Antifa will be speaking, and the event is a benefit night for the valuable work being done in Bialystok, which is in the East of Poland. The anti-fascists there, despite having a hard fight on their hands with local Nazis, have shown enormous courage, and it is important that their struggle is supported. Bialystok ABC are a very well-respected group within the European ABC network, and work hard to support Anarchist and anti-fascist prisoners, such as Polish anti-fascist prisoner Tomasz Wilkoszewski, who has already spent more than 5 years in prison accused of killing a fascist. In this poor country they are constantly in need of funds, and just a few pounds goes a long way there. We hope, with your help to raise as much as possible for our comrades in Bialystok. Bearing in mind the nature of this event, the deliberate attempt to undermine it by someone in Leeds is nothing less than fascist collaboration. Help us to make it a success by being there.

Advance tickets to the Polish Solidarity Night can be ordered by phoning 07800 566313. Or you can pay on the door.

Please assist the event by spreading this information as widely as possible.