Justice for Palestine: The wall must fall protests

November 9th to 16th saw the 2nd International Week against the Apartheid Wall , with actions throughout the world, including a number of events in the UK.

These included a blockade of the Hayes, Middlesex premises of Agrexco, Israel's national exporter of fresh produce. Activists erected a cage at the entrance to the factory, and a barrier at the exit, stopping all collections and deliveries for 8 hours, at an estimated cost of 30k - 40k to the company.

Seven activists were arrested and charged with Aggravated Trespass and Section 69 of the The Criminal Justice and Public Order Act 1994. They plan to use the court case to challenge the legality of trade with a company that deals in settlement goods, especially in light of the International Court of Justice Ruling which ruled that countries have an obligation not to not to render aid or assistance in maintaining the situation created by the construction of the wall. 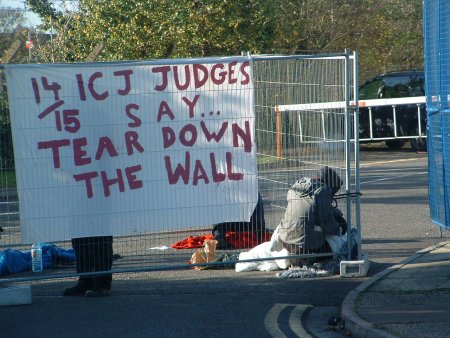 The cage on the entrance

Saturday 6th November saw a picket of Marks and Spencer in Nottingham and on the following Saturday, Brighton Activists staged a die-in outside Marks and Spencer, as part of an ongoing campaign. The Guardian reported that M+S continue to buy produce from illegal settlements, which have taken to using cheap imported labour from countries such as Thailand and the Phillipines, since the beginning of the Intifada.

Other Palestine related actions included an anti-wall demonstration in Oxford and York; vigils in Cambridge and London for Yasser Arafat, who died on Thursday 11th November. Also during the week, Mordechai Vanunu, Israel's nuclear whistle blower was arrested for talking to foreign journalists and Hannah James, a UK activist was deported from Israel after being declared a threat to the security of the state!

Upcoming Palestine events include a film screening in Neath on November 25th, and a meeting on the "Roadmap in tatters" in Swansea on December 5th.