Nablus, Palestine, shows solidarity with the people of Falluja by writing 'Al-Falujah' in Arabic in flames on the mountain above the city 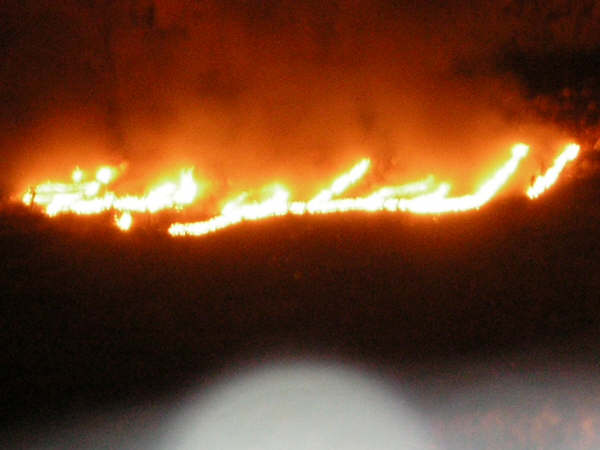 'Al-Fallujah' spelt out in flames lights up the sky on Jabal Ash-shamliya, the m

With US troops having killed over 1000 people in Fallujah in just over a week, the response in the US and Europe leaves much to be desired. Where are the millions who marched on February 15th?

The uprising in Palestine continues to be crushed and suffocated, and yet people continue to defy curfew, obstruct soldiers and resist invading jeeps with stones. It is difficult to escalate the resistance, so instead a message was sent to the people of Falluja and Iraq that at least Nablus, Jabal An-Nar - the Mountain of Fire, stands in solidarity with them. And a call to the world that here, after 4 years of intifada and 37 years of occupation, the flames of resistance have been dampened but not defeated.

'Al-Fallujah' was spelt out in Arabic using sand on a steep hillside above Nablus. With each letter 10 metres high, the word stretched to over 60 metres long. A lot of petrol and a few sparks, and the flames continued to be readable from the entire city long after being lit.


A higher resolution version of the photo is available by clicking on the photo on www.notesfrompalestine.net