This is an 860 word report of the Glasgow `Troops Out` picket of the BBC Scotland building in Queeen Margaret Drive, Glasgow, on Monday 29th November 2004. 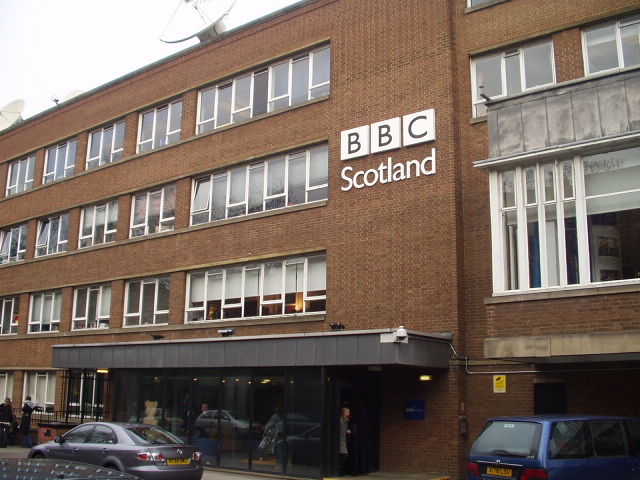 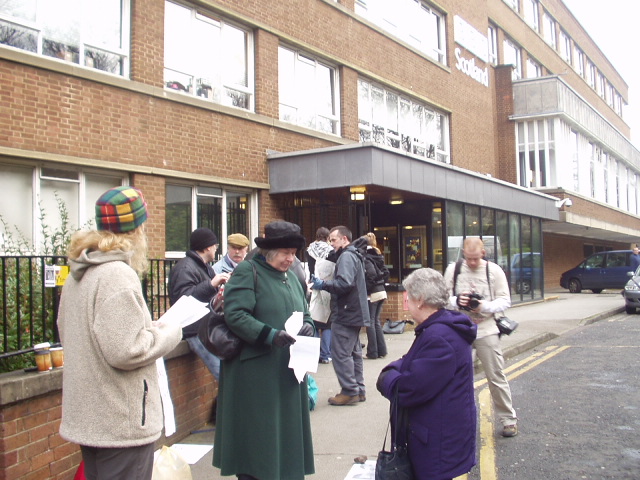 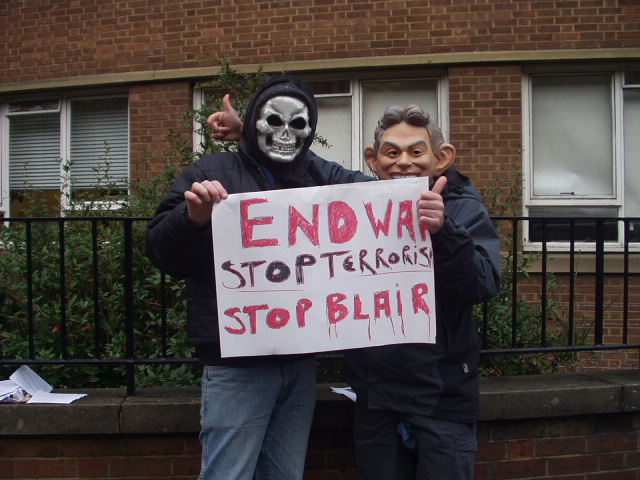 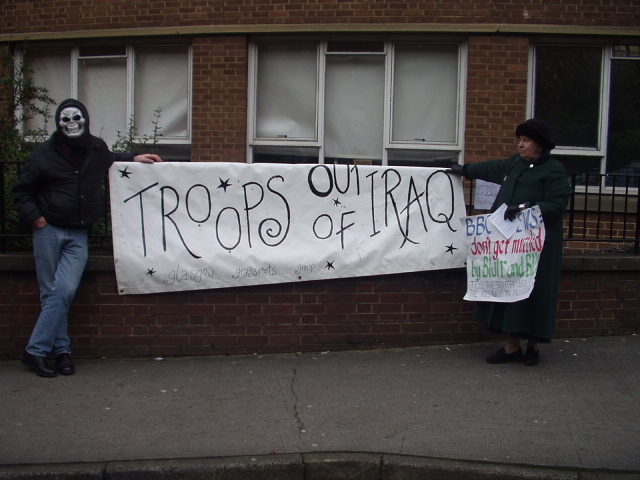 `Troops Out of Iraq` banner. 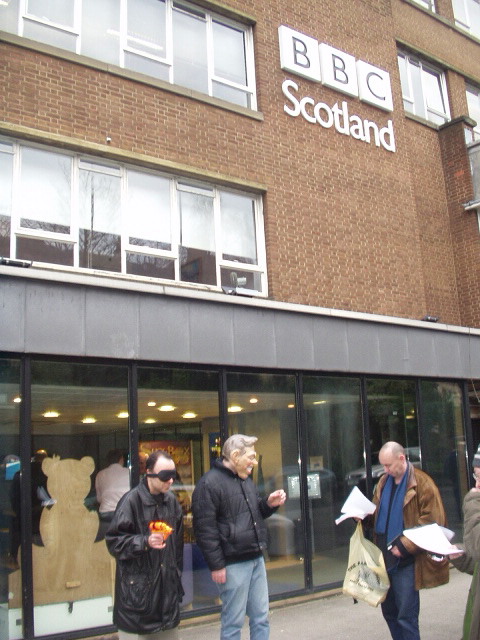 `Downing Street media awards` Prize is a mask for turning a blind eye. 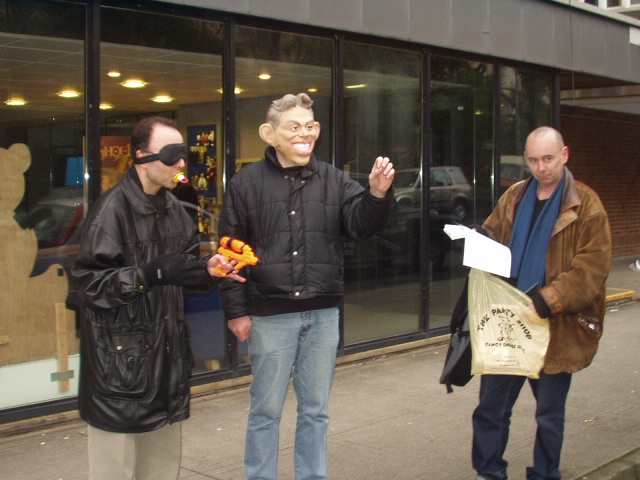 The awards continues, this time a dummy tit for silence on atrocities. 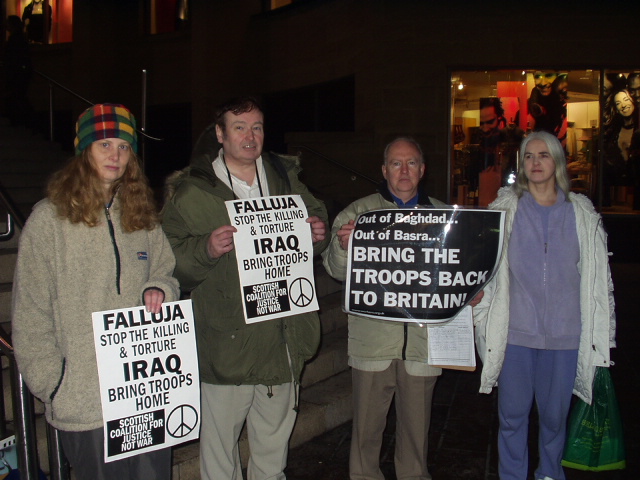 Vigil for Fallujah by the steps to the Glasgow Royal Concert Hall.


Glasgow based `Troops Out` held a three-hour picket outside the offices of BBC Scotland in Queen Margaret Drive, Glasgow. The BBC, cowed by the Hutton report, has represented the disaster of Fallujah as something that has just happened, rather than highlighting the war crimes that have taken place. The cutting off of electricity and water from a whole population is a collective punishment, which is a war crime under the Geneva Convention. The use of indiscriminate firepower as from AC130 gun ships and the dropping of 500kg bombs is excessive force, which is also a violation of the Geneva Convention. There is no sense of outrage in the reporting about the humanitarian disaster, which has taken place.
The picket started at 12.30pm and lasted until about 3.30pm and was attended by around 20 people. There was a large `Troops Out of Iraq` banner unfurled on the railings near the entrance in Hamilton Drive. Placards read `BBC War Crimes appeasers`, `End War Stop Terrorism Stop Blair`, `British Brainwashing Corporation`, ` BBC News don’t get muzzled by Bush and Blair – tell the truth about the killings in Fallujah` and there was one written in Farsi (Persian) which translated as ` Down with Imperialism, down with Fascism! ` Protesters took turns with the bullhorn to point out the deficiencies of media reporting of Iraq. One said that the views of anti-war protesters were not being made known. Another one mentioned that the two words `depleted uranium` were never used on three big US television networks (NBC, CBS and ABC) in the run up to war and that there was little coverage of the awful effects of the sanctions on Iraq anywhere in the mass media. There were a number of humorous epigrams such as “Blair Bush Corporation!” and “Leave your brains at the desk to be washed!” Although Hamilton Drive is a fairly quiet street a number of passing cars tooted their horns in support.
Someone who worked on BBC Newsnight Scotland came out to have a word with the group of demonstrators though she declined to give her name or exact position on Newsnight. She claimed that while the 6.00pm evening news bulletins “were quite sterilised”, Newsnight gave a better analysis. When asked why this was so she replied that she wasn’t the editor of the six O’clock news and she wasn’t going to defend it but “this stuff” (violations of the Geneva conventions in Fallujah, depleted uranium etc) was being covered on Newsnight. [While the late evening programme Newsnight may give a better news analysis it must be pointed out that it is on a minority channel and watched by a relatively small audience.] Paul made the point that on the 10.00pm BBC Radio Four news on Saturday 13th November (when the attack on Fallujah was at its height) the lead item on that day’s news was about the infidelities of Boris Johnson. Paul said he wasn’t interested in who Boris Johnson was shagging be it David Beckham or David Blunkett or whoever. Walter jokingly interjected “Major news story there, Paul!” Paul said that the death of over a thousand people in Fallujah was surely more important than the affairs of Boris the buffoon. Walter made the point that while the BBC kept giving the impression that interim Iraqi `president` Ayad Allawi was giving the orders at least ITN’s Julian Manyon said that some people would say “the fiction” that Allawi was in charge.
Walter and Paul went inside the BBC building where they spoke to the head of Public Policy, Ian Small. He listened politely and said he would pass on the groups concerns about the shortcomings of the BBC news and he would also look at the website of Danny Schechter’s new film `WMD – Weapons of Mass Deception`; www.wmdthefilm.com
Some of the protesters held an impromptu `Downing Street Media Awards` ceremony outside the main entrance to the BBC. One picketer, dressed as Tony Blair, gave a blindfolded `News Editor` a dummy tit (comforter) as a `reward` for the media’s silence on civilian casualties in Fallujah, the Lancet report, the US use of WMDs such as cluster bombs and DU etc. Other awards included a mask as a reward for turning a blind eye to oil and Western interests and a pair of earplugs for not listening to the 50% or more of antiwar viewers.
The picket dispersed around 3.30 and then several of the group formed a one and a half hour vigil for Fallujah by the steps to the Glasgow Royal Concert Hall near the statue of Donald Dewar. Five candles were lit and the small group collected signatures for a petition for Justice for Gordon Gentle. Gordon was a 19-year-old Fusilier who was killed by a roadside bomb in Basra in June this year. Despite giving his life for his country his family has been denied any pension or compensation.
The vigil finished at 6.30pm but will continue in the same place at the same time (5.00pm till 6.30pm) for the rest of this week.
Seven labelled photos of the day are attached.