Activist from Can Masdeu blockaded the spanish embassy today in soladarity with their mates who are in court today as the state tries to uses the law to commit more environmental and social destruction. 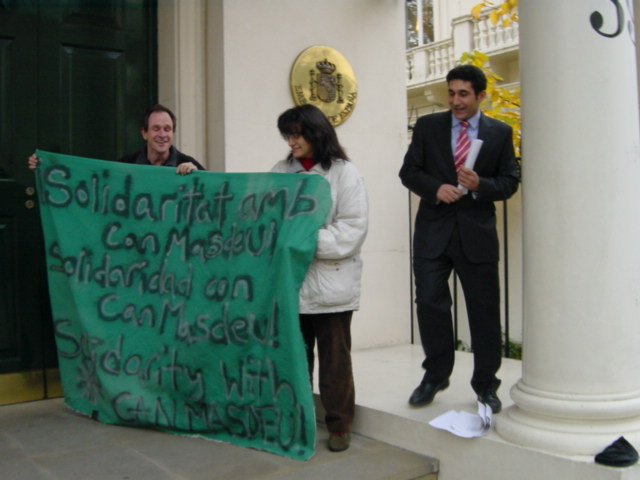 Today in Barcelona, the Fundacio de la hospital de Sant Paul is yet again trying to use the law against the community based sustainable education project - Can Masdeu. The foundation wishes to evict some thirty residents from their home, and over one hundred neighbours from their gardens and collective autonomous land. The foundation wants to sell the land, to property developers.

The project of Can Masdeu, (and other similar initiatives), carries genuine social, ecological and political value, both at a local and international level. At a time when the world faces ever deepening geo political and ecological problems, we need to encourage all positive trans-national grassroots initiatives that aim to address these issues through research, education and positive implementation.

We wish to express our outrage that neither the Catalan nor Local governments are intervening to protect a unique and valuable project and natural valley. Moreover, as both the Generalitat and the Adjuntamiento are members of the board of directors of the foundation, we question their professed impartial participation. We call on them to launch a transparent public enquiry into the long-term ecological and social impacts of the development of this and indeed all-future development within the Collserola natural park.

Agenda 21 of which the Spanish government is a signatory obliges local government to encourage projects just like Can Masdeu. The valley in which Can Masdeu exist should obviously be included into the park of Cosorolla and be given the same degree of protection. We fully support the demands of the Plataforma de Collserola for managing the park.

In the past the Foundation has unsuccessfully tried to prosecute the residents of Can Masdeu for utilising and renovating the building. When the building was first occupied it was in a state of imminent collapse, it has taken three years of hard work and money to save the building. We wish to express our accord with the occupants of Can Masdeu when they point out that it is fact the foundation that is guilty. Firstly of criminal neglect, for 50 years they left these historical lands and premises closed and abandoned. We denounce this as an act of property speculation by public bodies on behalf of private interests.