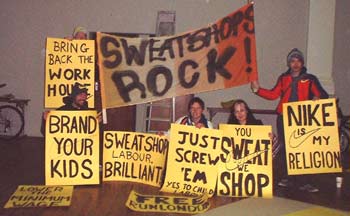 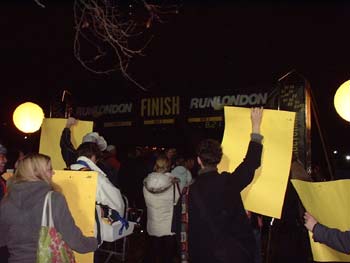 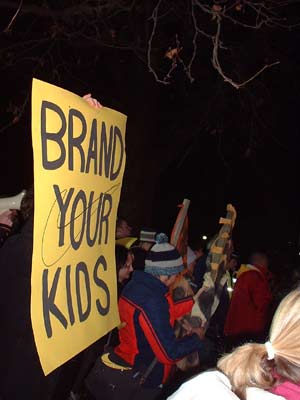 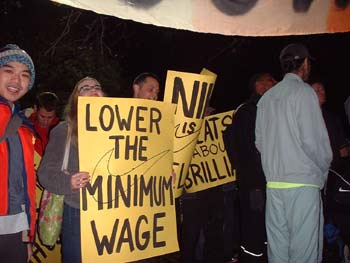 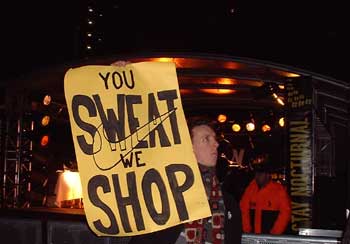 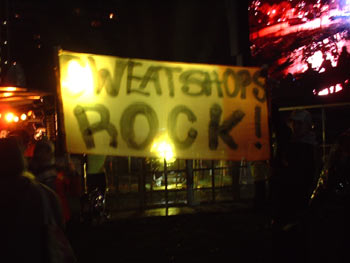 Taking a leaf out of the book of CRAP and following on from our DIESEL ACTION we decided the best way to wind up the folk at Nike was to become their greatest fans.

A pro-nike website was set up SWEATLONDON.COM and we sent out a call to arms.

Promoting all that is bad about Nike as a good thing, we decided to dress up in our best home made Nike clothes and head along to the finish line to promote all that is great about their business practice. An afternoon was spent in our HQ painting banners and customising our clothing with Nike swooshes.

We headed down to the finish line of the race, surrounded by thousands of people covered in Nike clothing. 30,000 runners were wearing matching tops, almost all with Nike trainers. Alongside them were hundreds of spectators branded with the swoosh in support. With almost religious fervour we set into our mission to join in the celebration of the brand.

We headed into the park where the race finished, only to find that we had arrived early enough to get a spot right next to the finish line, and accross the track from the film cameras and MC.

Ten Space Hijacker agents came along to join in the fun. The Nike MC was hollering on the mic whilst agent Treat joined in with a few of our own chants!

"Sweatshops ROCK!"
"Child Labour is good for the economy!"
"We need little hands to do the small stiching"
"Brand Your Kids"

The Nike organisers were getting suitably annoyed at this point, especially after realising our banners were appearing on the 30ft video screen of the finish line. They soon switched the screen to a view of the glow-worm like runners crossing Tower Bridge.

Luckily we also happened to be right next to the press pen, where the Nike celebrity runners were being intervied by the BBC. The cameraman found it impossible to find a position to interview Paula Radcliffe without one of our Nike supporters jumping into view.

The beauty of the event was that the finish line was in a public park, and as such it was public not private property. Nike had no right to ask us to leave, although we ourselved never imagined we would get so close to the finish line and press pen.

One Agent had set up his very own Sweatshop, selling a spoof Nike perfume "Sweat" from a tray. Although at £89.99 per bottle there were very few takers.

Just as he was in the middle of a sales pitch however, a group of protestors from NO SWEAT turned up to wind up the organisers even further.

Eventually the celeb runners had all come through the finish line, and the focus of the event turned to a stage that Nike had set up in the park.

Never ones to miss out on an opportunity our pro-nike protestors headed over to help nike with the celebrations, however upon arriving they did not seem too keen to see us. The host had just announced that the winners of the race were due to arrive on stage and have awards presented by Sebastian Coe. However after seeing us (their most loyal fans) for some reason the presentation was postponed.

20mins later we were getting cold and realised that the presentation would not happen with us in the picture. A cunning plan was hatched and we loudly declared it was time for the pub. We walked away, counted to 30, and right on cue the host announced the winners had arrived on stage! A quick double back, and we were there to help them with the celebrity endorsement!

However by now our fingers were about to fall off with frost bite. Nike had been suitably annoyed, the press had all taken time to photograph our support and several thousand runners had seen us cheering for them.

We called it a day, and headed back to the pub for some sporty & healthy beer drinking.

For more in depth info on Nike see NoSweat briefing at:

No Sweat is holding their annual gathering over the weekend of 4-5 December 04 at ULU, central London. Speakers will include Nicaraguan sweatshop trade union organisers, members of the mass US campaign United Students Against Sweatshops, the McLibel defendents, plus academics, activists and campaigners from the UK, as well as the makers of the film The Corporation.

PLUS: Sat night fundraiser for Haitian unions with Attila the Stockbroker and Robb Johnson at the Ivy House, 8-10 Southapton Row, Holborn.