‘Dear Mrs Blair’ is a personal video letter to Cherie Blair, mother to mother from Rose Gentle. Rose’s son, Gordon, was killed on 28 June 2004 in Iraq. He joined the army at the age of 19, in a job centre in Glasgow, just six months before his death. 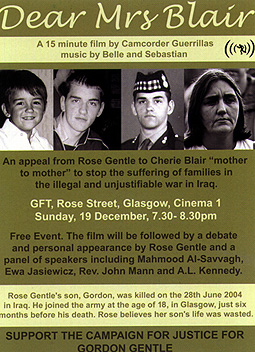 The film screening will be followed by a debate and personal appearance by Rose Gentle and a panel of speakers including Mahmood Al-Savvagh, Ewa Jasiewicz, Rev. John Mann and A. L. Kennedy.

Rose is asking the Prime Minister’s wife as a mother who has sons the same age as Gordon, to do all she can from her unique position of influence to get the troops brought home safely from Iraq. She strongly believes that Gordon's life and the lives of all British soldiers killed in Iraq have been wasted fighting an illegal and unjustifiable war.

The film is being produced by Camcorder Guerrillas, a collective of filmmakers, journalists and grass roots activists based in Glasgow who produce videos, on a voluntary basis, to raise awareness of different social and political issues.

Rose has never been politically active before but she has turned her grief and pain into a campaign to bring British soldiers home from Iraq. 'The government so far has ignored my plea" says Rose. "But when I am on my own, I go into my son's room, close the door and just think, something has to be done".

Message of support from Iain Banks, the author:

"To Cherie: Oh, just do anything you can to bring them home, in the name of whatever you hold dear. They're not even dying for their own country; they're dying for Standard Oil, Halliburton and Bechtel. They died to help ensure America chose the guy with the yellow streak over the guy with the purple heart. Whose interests, whose lives and health and comfort does Tony really care for most - those of distant corporate shareholders and Republican grandees, or the young men of the country he's supposed to represent? Home. Bring them home.