Doublespeak in Action: The Ravaging of Gaza Continues

Pay attention to what the Israeli ruling elite does, not what it says. Dec. 17th brought the incursion of some 25 tanks, bulldozers and armored vehicles into the Khan Younis refugee camp. Continuing a policy of collective punishment of ordinary civilians, the shattering of their everyday lives and demoralization, numerous homes were intentionally demolished and a number of residents were murdered and wounded. 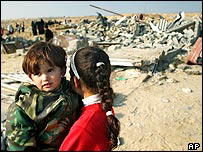 As the Israeli political class talks 'peace,' it continues its brutal war against the simple Palestinian population. Dec. 17th saw the incursion – as part of Operation ‘Orange Iron’ -- of some 25 tanks, bulldozers and armored vehicles into the densely populated Khan Younis camp, where the IDF murdered 7-year-old Rana Siyam a week earlier [

http://dc.indymedia.org/newswire/display/110816/index.php ]. Helicopter gunship rockets killed at least eight Palestinians and wounded more than 30, including five children under the age of 16. In a policy of mass collective punishment of the civilian population, numerous homes were intentionally bulldozed and destroyed. Hundreds of Palestinians were reported to have fled their homes for fear the army would demolish them and are sheltering in a nearby hospital, a stadium and elsewhere
[

Since the outbreak of the second Intifada 52 months ago, longer-term Israeli state policy remains centered not on the ruse of 'security' or 'anti-terror operations' but spatial demolition and strangulation. This is manifested on an almost daily basis in the dismantling of Palestinian private and public space, especially at what geographers call the "household scale," with repeated and systematic destruction of family dwellings and the associated displacement of population. This is the terrorizing by the Israeli state of the most intimate spheres of everyday life.

All this interlocks with severe restriction of personal movement and -- the most striking instrument of spatial strangulation -- the building of the Great Wall of Palestine. The strategy seems predicated on three interwoven aims: unilateral separation from the Palestinian population, its demoralization and territorial dismemberment. What can be more demoralizing than seeing your house and belongings bulldozed for no reason you can fathom? Over the longer term, the Israeli oligarchy hopes the powerful effect of demoralization will lead to increased Palestinian out-migration to escape the unbearable situation, part of the overriding Israeli state aim of de-Palestinization and its distinctive territorial imperative.

Withdrawal from a totally controlled, demoralized and isolated Gaza, in effect turning it into a sealed enclave, is one aim of Sharon's "disengagement" plan. Such an enclave will be totally severed from other Palestinian enclaves in the West Bank, rendering a viable Palestinian state impossible.

Pay attention to what Sharon does, not what he says. He and his cabal have brought the art of Doublespeak to new heights. Ever more ordinary Israelis are uniting behind calls for soldiers to refuse to carry out such orders against a defenseless population.