This is a 1,600 word report of the launch of the film `Dear Mrs Blair` at the Glasgow Film Theatre (GFT) on Sunday 19th December 2004. Five labelled photos of the night are attached. 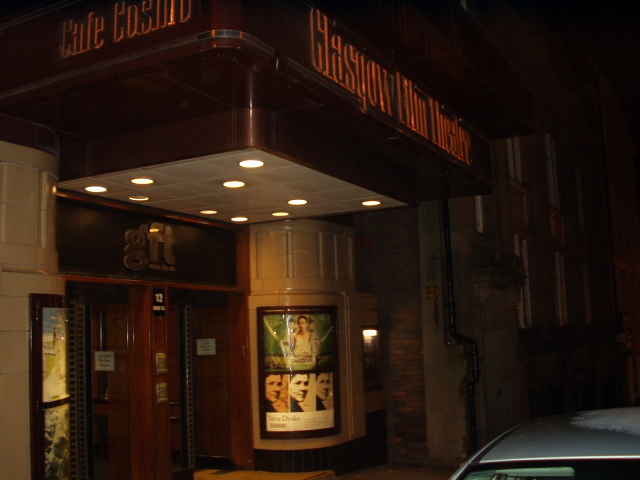 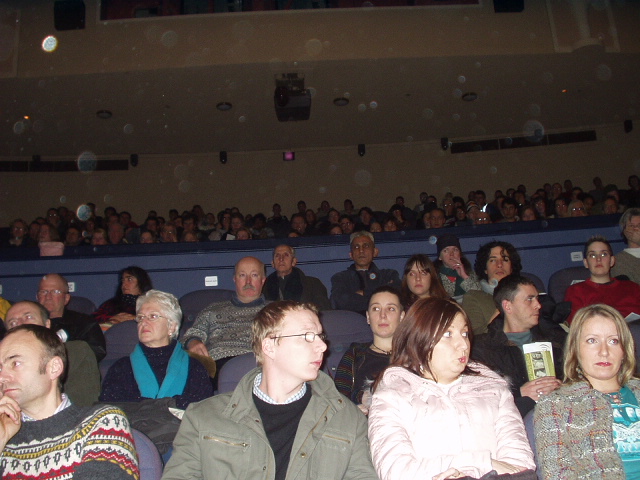 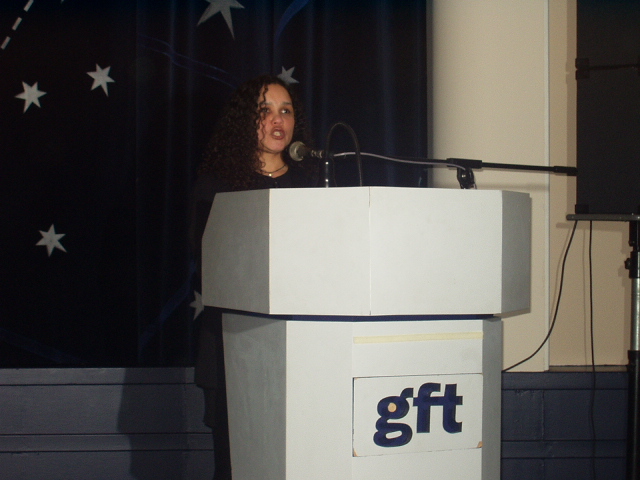 Aimara Reques of Camcorder Guerrillas, director of the film, chairs the evening. 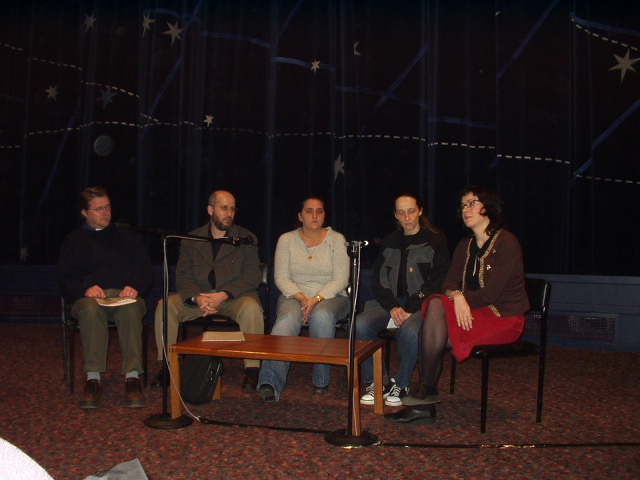 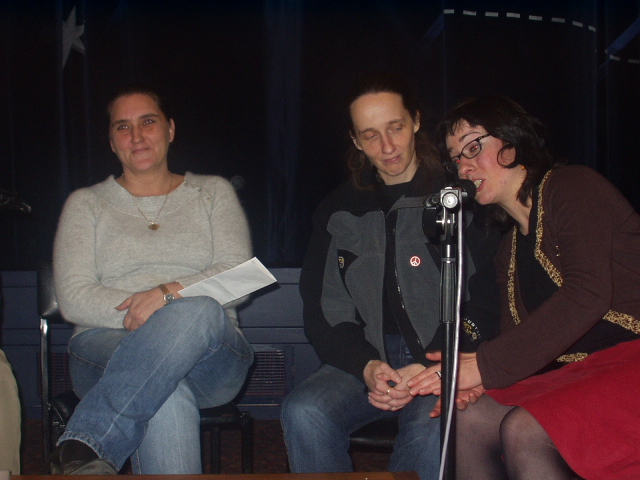 A chilly Sunday evening saw the launch of a film made by Glasgow based independent filmmakers Camcorder Guerrillas. Around 250 braved the frosty night to see the free but ticketed `Dear Mrs Blair` in the GFT’s Theatre 1. Although Mrs Blair herself and the Royals were absent, arriving in taxis were local celebrities like writer A L Kennedy and Scottish Socialist Party MSP Rosie Kane.

Aimara Reques of Camcorder Guerrillas introduced the event and the film itself was prefaced by a foreword by actor Peter Mullen (star of `My name is Joe` etc.) who expressed sympathy and solidarity with the Gentles and apologised for not being there in person.

In the form of a video letter to the wife of the Prime Minister, the 15 minute film, is a powerful message, 'mother to mother', calling for the troops to come home and an end to the suffering of families in the illegal and unjustifiable war in Iraq. The film showed scenes of young Gordon’s early life, his appearance in a school nativity play, his liking for football and his attempts to find a job. The army enlisted Gordon as he signed on unemployed and amazingly after only a few months basic training he was sent to Iraq. A roadside bomb in Basra tragically killed Gordon on June 28th this year. Moving scenes of his funeral were shown with the local minister Rev David Mann, himself an American, performing the oration. He said he had just three words to say to Tony Blair and George Bush: “Shame on you.”

Director of the film Aimara Reques, who chaired the event, told us about Camcorder Guerrillas (www.camcorderguerillas.net) and reminded the audience of the information pack that everyone was given. Aimara, from Venezuela, a film producer, actress and activist asked that everyone send the supplied postcard to Cherie Blair and also sign the petition for Justice for Gordon Gentle. She introduced the panel of speakers, which included the Rev David Mann pastor of Pollok Church, Mahmoud Al Sabah an Iraqi living in Scotland, Rose Gentle mother of Gordon, Scottish writer A L Kennedy and activist and freelance journalist Ewa Jasiewicz.

Rose Gentle spoke after the film to thank the audience for coming on such a cold night and said she did not want any other family to go through what the Gentles had gone through. She called for the troops to come home and said we shouldn’t believe any more of Blair’s lies. Blair’s sons were alive unlike hers and she urges people to join her campaign.

Next Glasgow based writer A L Kennedy (author of So I am glad, Indelible acts etc) spoke to say that her recent monthly column in the Guardian on Iraq had upset many people. She had calculated how much blood had been spilt for oil – oil that had not yet started flowing. She estimated that 93,096 pints of Iraqi blood had been spilled along with 10,432 pints of American blood, 600 pints of British blood and this along with blood from the injured and other coalition forces added up to a grand total of 283,200 pints of blood. The amount of blood spilled would have filled 1,770 baths. This article had generated a great deal of hate mail. She said there must be a better way than killing and mutilating people and poisoning their country with depleted uranium. Depleted uranium is radioactive for 4.5 billion years, which is longer than there has been life on earth. While the pursuit of money and power is a great motivation the power of love is stronger. “If you take somebody that somebody loves from them they will not ever forget that, you can take it out of the newspapers, you can make sure it never gets into the newspapers but they will not ever forget, hundreds of thousands of people all around the world will not forget.” She quoted a holocaust survivor who spoke of the power of love.

Third speaker was Mahmoud Al Sabah who is an Iraqi living in Scotland. He told the audience how he lost his mother during the attack on Iraq. His father had died of cancer a few years previously. He spoke of the brutal reality of living in Baghdad; the going through the daily checkpoints, the imprisonment, the rape, the kidnapping, the unemployment, the poverty and deprivation, the alcohol and drug abuse, the prostitution and disruption of health and education systems, the absence of the most basic of services and the lack of security. Was this the democracy that the West promised the Iraqis? He spoke of the inhumane treatment of prisoners and how US soldiers shoot people and come up with statements like `Wow, that was awesome! `
He spoke of how British troops had killed an Iraqi in Basra and how his family was offered just £4,500 compensation. Coalition soldiers were said to have stolen large amounts of cash and valuables from Iraqi homes. $18.6 billion had gone missing from Iraqi funds. The situation was so desperate that Saddam Hussein might well win an election if he was to stand.

Next journalist and activist Ewa Jasiewicz spoke to recount a story from her time in Basra. A `Major Clements` who dealt with compensation claims for family members killed by British troops had said “Well, if you’re in a riot then you’re committing a criminal act so there won’t be any compensation.” He was effectively condoning extra-judicial killing. He also added that while one soldier had shot an Iraqi in the leg he would have shot him in the neck. The major had lost his humanity; the humanity of the soldiers is under attack every day. While it was good that there were 500 people at the Justice for Gordon Gentle demo on October 30th in Pollok there should be 5,000 or even 50,000 people there. She finished by saying to loud applause that it was important to support Rose Gentle’s campaign.

The fifth and final speaker was the Reverend David Mann, the Pollok Church of Scotland Minister, who said: “I am an American and I am deeply, deeply ashamed of my country.” He said that America is a nation governed by fear at every level. Since Bush became President this country (the USA) has evolved into a culture of violence and imperialism. He spoke of how he had heard of how Hollywood had commissioned a screenplay for a film based on the US assault on Fallujah with Harrison Ford in the leading role. Before the bodies are even buried Hollywood wants to make money out of it. He contrasted that with the film we had just seen which was real.

Aimara then took several questions from the floor. Colin Buchanan of` Troops out` said the war and occupation were built on lies and the troops should be brought home. Another speaker refuted the propaganda that we had to support our troops and they should be brought home. He also said there were 5,000 American deserters and this was likely to increase. He also said the majority of people in Britain wanted the troops out. Rosie Kane of the SSP said that Army recruiters shouldn’t be allowed to come and get our children. She referred to the recruiters as `stalkers`. She also mentioned the use of illegal weapons such as napalm. An Iraqi from the floor revealed that ballot papers for the January election were on sale in Iraq for $100 each.

It was announced that videos of the film `Dear Mrs Blair` were available along with DVDs of `FTA` (Fuck the Army) starring Jane Fonda and Donald Sutherland.


For more information on the Justice for Gordon Gentle campaign please see:
www.justice4gordongentle.co.uk or write to the family at 52 Templeland Road, Glasgow G53 5PG.
If you want to write to your MP but are not sure who he or she is please phone the House of Commons enquiry line: (020) 7219 4272

Pro-war propaganda
Finally it should be pointed out that Hollywood movies are not just about entertainment, they often have a strong propaganda element and even attempt to rewrite history.


Since September 11, Bush administration officials have
held meetings with Hollywood representatives regarding the
content of the movies and other material they produce. In
an October 17, 2001, meeting, Hollywood heads “committed
themselves to new initiatives in support of the war on
terrorism.”

“Black Hawk Down” is just one of those movies, made
hand-in-hand with the Pentagon. Weeks before the release
of “Black Hawk Down,” the Motion Picture Association of
America held a private screening for senior White House
advisers, and allowed them to make changes. US Defensc
Secretary Donald Rumsfeld and Oliver North, among others,
attended the movie’s Washington DC premiere.


Now the latest is that a film about Fallujah is to be made with Harrison Ford as the American General in charge of the assault. From the Guardian:

Harrison Ford is to star in what will be Hollywood’s first feature about the current Iraq war. Producers Michael Shamberg and Stacey Sher have bought the option for No True Glory: The Battle for Fallujah, a non-fiction written by Slate reporter Bing West.

Ironically the only major film made about the first Iraq war was `Three Kings` about three greedy ex-Gulf veterans in search of gold. One of the stars was George Clooney who came out against last year’s attack on Iraq, along with Dustin Hoffman, Susan Sarandon, Sean Penn, Martin Sheen, Mike Farrell and many other actors.


Five labelled photos from the night are attached.