UK secretly backs removal of nuclear chief
By Clayton Hirst
19 December 2004
Item from The independant shows how far the bliar poodler has gone.
How long can he last is open to question, given that poodlers tend to crack up in the end. As the poodler's own poddlers get caught out lying etc., we maty see the psychopathology play out in a suicide in the family as the awareness of his aiding the USUK atrocities in Iraq dawn. 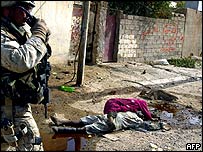 The British government, while publicly supporting the efforts of Mohamed ElBaradei, head of the UN's nuclear watchdog, to stop Iran developing nuclear weapons, is secretly backing US plans to remove him.

The US State Department and the CIA were last week reported to have tapped phone conversations with Iranian officials by Dr ElBaradei, director general of the International Atomic Energy Agency (IAEA), in an attempt to gather information that could discredit him.