Voices in the Wilderness in Parliament Square

Voices in the Wilderness, Code Pink and Women in Black joined long-term anti-war protester Brian in Parliament Square on 22nd December 2004 for a night under canvas in solidarity with refugees in Fallujah. 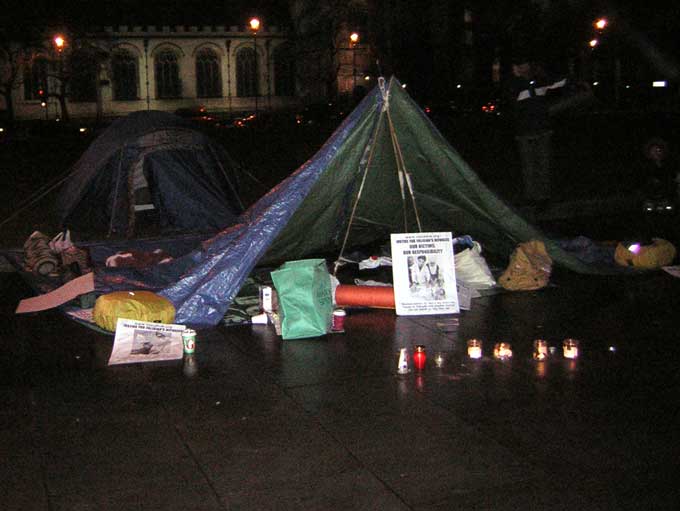 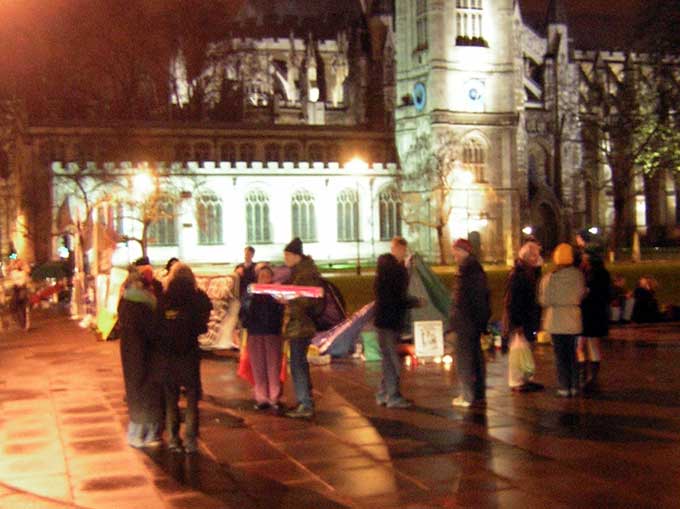 Voices in the Wilderness and Code Pink invited fellow sympathisers to spend a cold and uncomfortable night under canvas in solidarity with the thousands of refugees in Fallujah who will be spending an Iraqi winter in tents, their homes having been bombed to rubble. This solidarity action began at 7pm on a Wednesday evening to link up with Women In Black, who hold a non-sectarian candlelit vigil for peace in Palestine at the foot of Edith Cavell’s statue every Wednesday.

Although around thirty supporters appeared, some with mince pies and Christmas cheer, Susie Campbell (of Voices in the Wilderness) and Sue Wood (of Think Pink) were only expecting three or four others to brave the cold in a tent held up with duct-tape: an interesting visual counterpoint to the flamboyant excesses of the surrounding architecture.

Serge from Ramparts Radio was a warm and welcome presence, recording interviews for later transmission. Police were inquisitive but friendly and non-intrusive, even offering support should those in the square require it (well there might have been politicians around, and we all know how dangerous they can be…)

The 24 hour peace protest in Parliament Square has been a visible symbol of opposition to the war in Iraq for over 400 days: right opposite the Houses of Parliament, the so-called seat of our democracy. Having survived harassment, anti-terrorism initiatives, two court battles and the Countryside Alliance, Brian took this unexpected company in his stride.