Gildardo Perez Gomez was one of the CIPO-RFM activists sleeping at the protest camp on night it was raided last September. Below he recounts his experiences in his own words. 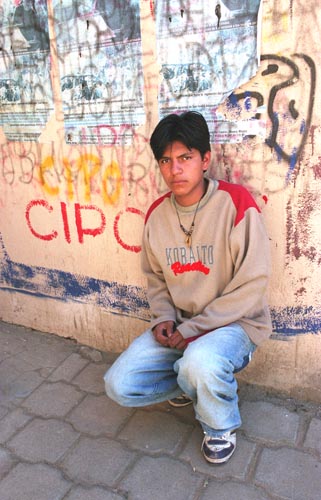 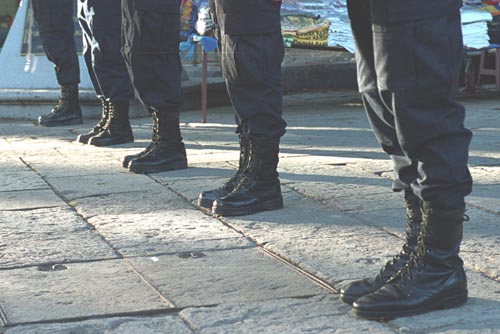 Gil has personal experience of these boots. 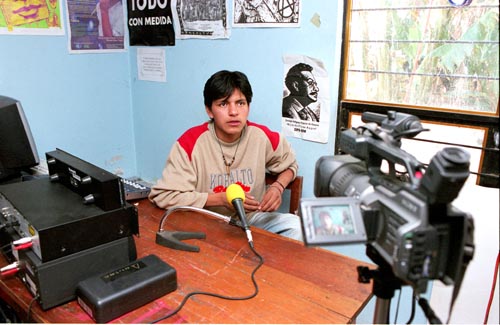 Being interviewed at the CIPO-RFM pirate radio station.

My name is Gildardo Perez Gomez and I am 18 years old. I started working with C.I.P.O. when my sister told me about it; I had already read some books about Magon and liked his thoughts and way of doing things.
Six months ago I began to attend the protest camp that C.I.P.O. had in town and from there I got more involved with the organization. It wasn’t only because I liked the principles and work of Magon I am also fighting for my people. Where I come from we are very marginalized, we are forgotten. It not just our people it is many other communities that are suffering because of government policies, they call us ‘indigenous’ but we want to be recognize for what we are, the rightful owners of this land not foreigners or strangers.
On the 14th of September at around 6’15 am we were at the camp and about 150 police and Special Forces arrived along with a supposed human rights representative who did not show any credentials, they started to collect our blankets, cooking stuff and literature. They took everything without an explanation; we were asleep apart from those doing the guard. When we awoke they said they were going to proceed with the eviction. They didn’t have any eviction orders or any legal documents; they loaded everything on a truck while we shouted anti-police slogans, that was all we could do.
The media reported that they had evicted about 100 people; the truth is that we were only 14.
Once they had taken away our things they started to beat us, they didn’t have an arrest order but after a phone call to the commander we were all arrested.
They separated us into groups and carried on beating us, I was hit in the stomach and the ribs, some colleagues were beaten on the ears, two of them still have hearing problems.
We were taken to the police station and on the way there they kept hitting us and telling us we were all going to die, on arrival one of the women was dragged by the hair into the station. We were denied phone calls, we couldn’t talk between us, and we were denied all legal rights. There was a heavy police presence outside the police station, they were afraid that people from the communities were coming for us.
About 50 police in plain clothes came to where we were and showed us an assortment of weapons to threaten us. This situation continued for about 5 hours, not a word about the reasons for the eviction or the charges against us. Then they took us to separate cells and told us that we were being accused of assaulting 15 police officers, stealing electricity and causing damage to a national heritage site. These last two charges were later dropped. The first charge carries a prison sentence. They took our statements at around 12 am and kept trying to confuse us with their questions. Later in the cells they brought us some papers to sign and told us we were being moved. They divided us and moved us to different prisons.
The first ones were moved at 2 am.
At the time I was 17 years old, they put me in a maximum security prison. According to federal laws I am a minor but here in Oaxaca you are an adult at 16, this law is unique to this state. However we are not given full rights for example I can not vote.
On arrival in prison we were taken to see a nurse she checked our pulse, temperature and blood pressure. Then came a doctor who signed a certificate to say we were in good health.
One of our colleagues had a fractured bone and has now developed complications.
We were taken to a hall with all the new arrivals, drug addicts, rapists, murderers, burglars. Hearing them talk I wondered what I had done to be there. We were just demanding our rights. I was glad that there were a few of us. I was there for 5 days; I could not sleep at night afraid of what they will do to me. We kept giving them food and cigarettes to keep them happy. There was a lot of drug smuggling going on around us.
Personally this experience has not been a deterrent to me to keep on the struggle. I live now between the protest camp and the C.I.P.O. building. In the mornings I take classes, I am preparing to go to university.

(the words and pictures above are subject to copy write but available for free to non profit organisations/publications/websites etc. To use contact: