On 6 January, without any notice, the so-called "Police of the buildings", producing an unofficial order, with no authoritative stamp, began to destroy all the Rromani families' cabins while exerting physical violence upon women and children present there during the action. 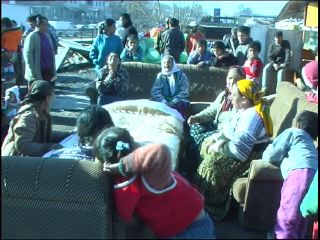 In spite of the cold, the Rroms remained with their families among the ruins of 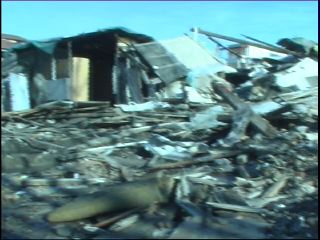 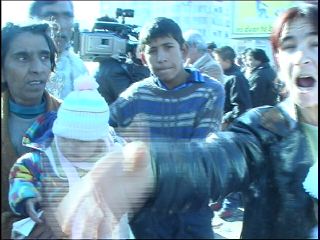 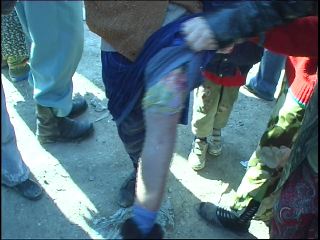 Albania was known so far as a country with no real problems of racial prejudices or overt discrimination against Rroms. However, modernisation has brought the first seeds of these evils and we can observe their prompt development especially during the last period. The date of 6 January 2005 brings a new example of this harmful degradation.

Hundreds of Rromani families had already suffered a first powerful blow between 1992 and 1997, when they were cheated by the fake banks called "Pyramids", set up mainly by ethnic Albanian but also by one Rromani so-called (and self appointed) "leader" – who promised them miraculous yields of 20 to 30% per month. These families, along with numerous non-Rromani families equally victims of the "Pyramids", lost all their savings. Hundred of families lost also the money they had got from selling their house, apartment, cattle or other belongings, with view of depositing this money in the "Pyramids" and grant for themselves a good return and a normal living. Such a mistake can be explained by the context of total social disorganisation and massive unemployment as well as the unawareness, after decades of communism, of these naive people about the dangers brought by real and false banks.

Family disasters resulted of this situation, including great poverty, massive emigration, prostitution, various crimes, suicides etc… Among other results one hundred or so families settled in the bed of the Lana river (a canal crossing Tirana) in a kind of shanty-town, which has been devastated several times by flood of the Lana river. Repeatedly, leaders of this vulnerable community, with the help of "Rromani Baxt Albània", sought a long term solution from the city council, namely a safe place to build by themselves their own houses with easy terms to pay for the land they would acquire this way. All in vain.

On 6 January, without any notice, the so-called "Police of the buildings", producing an unofficial order, with no authoritative stamp, began to destroy all the Rromani families' cabins while exerting physical violence upon women and children present there during the action. The reason was that four persons, all originating from the Northern mountains, had won a trial in which they had been recognized former owners of the land, and wanted to set up a car washing station on this location. One should emphasize that these four mountaineers had moved to Tirana in 1994 or so and they are not entitled to be regarded as legitimate owners of the land, which they acquired only through corrupting the police and judiciary. In addition all the alleged proceedings has been run without the Rromani families being informed, which constitutes in itself an iniquity and an act of contempt regarding the victims.

In spite of the cold, the Rroms remained with their families among the ruins of theirs cabins – a view reminding of Indonesia or Sri Lanka, facing the insults of the four mountaineers calling them names: "Arrxhinj, gabel, go back where you are coming from, this is not your land, this is the Albanians' land" and threatening of burning them with gasoline if they do not leave until the morning.

Since the 6 January, the Rromani victims have tried to call for help several of the numerous Albanian organizations of Human Rights or Minority Rights flourishing in the country. None of them has ever responded so far (Friday 7 January, 12.00). They called also Mr Refik Tare, appointed by the government as coordinator of Rromani affairs, in compliance with the National Strategy promoted by the Council of Europe. Unfortunately, this civil servant, a Rrom himself, declared: "this is only Law being implemented" and he refused to advocate for real (not formal) justice. The only persons who came and solidarised with the Rromani families (in addition to three Rromani NGO's: "Rromani Baxt", "Amaro Dives" and "Rromët për integrim") are. Mr Ligoraq Karamelo (Member of parliament, Human Rights Party), Mr Sokol Neziri (City hall civil servant, sector 4) Mrs.Silda Anagnosti OSCE and the media network "Media NEW 24".