At the beginning of January 2005, a group of people from London joined ISM (International Solidarity Movement) and travelled to the occupied territories of Palestine. Some of them are carrying a blog with their experiences. This is the first account that arrived from: first impressions. This is the summarised version, you can read the log... 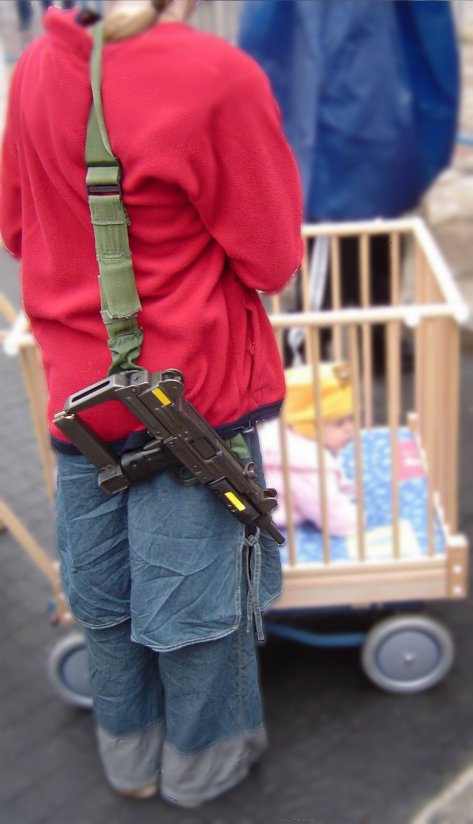 sub gun instead of handbag

They landed in Jerusalem and from there they travelled to Ramallah. There are so many checkpoints on the road that they have names.

One of the first things that strikes the sight is the contrast between Jerusalem and the West Bank. The poverty in the West Bank is self-evident.

After taking some updates on the situation in Palestine necessary for any international visiting, they travelled back to Jerusalem, where there was a hearing for a Palestinian peace activist who was arrested on a demonstration against the huge Wall that the Israeli government is building within the West Bank (not in between Israel and Palestine as commonly thought), cutting off farmers from their own lands, families from each other and dividing the West Bank into South African style Bantustans.

It is important that anyone who supports the Palestinian cause does all they can to support Mohammed - the Israeli state has gone after him specifically because he is involved in non-violent resistance to the occupation and the illegal Wall.

Only a few were allowed to the public gallery and the rest held a small demonstration outside the court room. Then a load of Israeli settlers turned up, holding a protest about an unrelated issue, and a tense situation was created. Some of the settlers shouted abuse at the demonstrators for supporting a non-jew, the police sort of allowed them to get away with it and the image of the day was a young settler mother who had a machine gun slung over her shoulder. Carrying guns openly in public seems to be very much a part of the culture in Israel - not just the police and army.

Links and offers to help were made to an African community group and in the Old City and a youth centre which will be opening in Ramallah on the 15th of January.

Another feature to highlight is the peerless hospitality of the Palestinian people.